Is Mako the next big thing in Africa?

At today’s Africa Down Under Conference being held in Perth, Mako Gold Ltd (ASX:MKG) managing director Peter Ledwidge will be outlining the company’s strategy in progressing its gold projects in Côte d’Ivoire and Burkina Faso.

He will have plenty to discuss given that the company is rapidly advancing the Napié Project in Côte d’Ivoire and is looking to build on a gold discovery at the Niou Project in Burkina Faso.

Significant widths and high-grade gold have been intersected at both projects, and Ledwidge is of the view that they both have the potential to be multi-million ounce gold deposits which are characteristic of the regions where they are located.

Importantly, both Peter and Ann Ledwidge who is general manager exploration have extensive experience in exploring and developing gold projects in Africa with the latter leading the team which discovered the 2 million ounce Natougou deposit for Orbis Gold.

Peter was also involved in that development, and both are geologists with combined experience of 55 years. 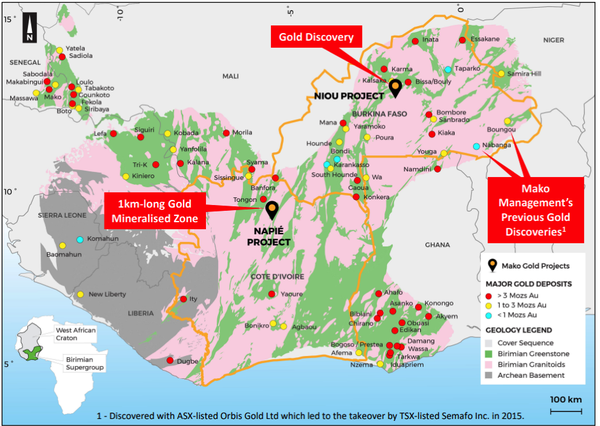 Plenty of activity in Côte d’Ivoire

The final results of the recent exploration program being undertaken at the Napié Project in Côte d’Ivoire came just days after Mako lodged two applications for exploration permits with the Ministry of Mines in Côte d’Ivoire that would more than double the company’s footprint in the region to 520 square kilometres.

These applications cover 17 kilometres of highly prospective Greenstone-Granite contact, and they lie within 30 kilometres of Barrick Gold’s 4.9 million ounce Tongon Mine.

Consequently, if Mako is successful with its application, this could well be a market moving development.

Reflecting on the company’s drilling results, they have been outstanding thus far with the Napié Project potentially comparable with the $31 billion capped Barrick Gold’s 4.9 million ounce Tongon project lying to the north-east and the $1 billion capped Perseus Mining’s (ASX:PRU) 3.4 million ounce Yaoure project situated to the south.

Mako is earning up to a 75% interest in the Napié Project under a farm-in and joint venture agreement with Occidental Gold SARL, a subsidiary of Perseus. Mako currently holds a 51% interest in the permit and is the operator of the project.

The majority of the results released in August were received from the remaining eight holes of the Tchaga Prospect.

Select results from the July campaign can be seen below. 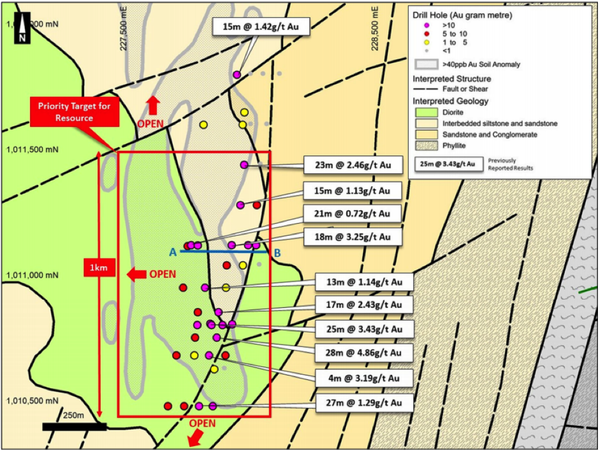 Wide zones at Niou bode well for the future

The Niou Project in Burkina Faso delivered outstanding results at the start of the year with wide, high-grade gold returned in the maiden drilling campaign.

The following graphic shows the quality of the results, as well as underlining the geological trends which could well come into play when the next round of drilling commences (see planned drilling in red). 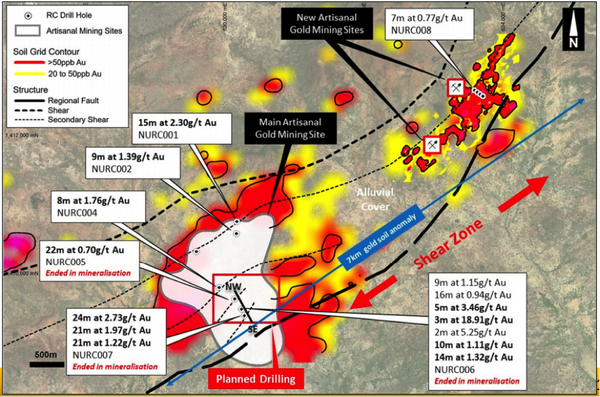 Consequently, there are multiple share price catalysts in the pipeline and no doubt Ledwidge will be underlining these when he presents today at the well-regarded Africa Down Under Conference, now in its sixteenth year.