The agreement which was signed on September 6, 2017 relates to the area outlined in red on the following map. 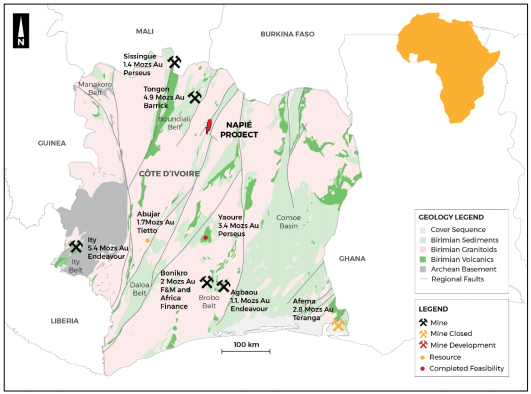 It is evident from the numerous discoveries and large producing mines in the region that Mako is in the heart of gold territory.

Under the terms of the agreement, Mako had up to three years to spend US$1.5 million on exploration on the permit in order to reach its first milestone and earn-in 51% of the project.

Management has made a good impression in fast tracking exploration and reaching that milestone in less than two years, just over one year after listing on the ASX.

Mako can move to 75% on DFS completion

Arguably the most significant development to emerge in conjunction with meeting this milestone is an opportunity for Mako to earn up to 75% of the Napié Project.

According to the terms of the FJVA, if Mako continues to sole-fund expenditure on the Napié Permit, Mako can increase its interest up to 75% by completing a definitive feasibility study (DFS) on the permit.

If Mako completes a DFS, Occidental Gold can then elect to contribute post-DFS.

At that time, a joint venture company would be formed between Mako, OG and Australian African Investment Fund (AAIF), which has a pre-existing JVA with Occidental.

Facilitating this opportunity has been Occidental’s parent company, Perseus Mining’s decision to focus on developing its core assets, albeit stressing the potential that lies in the Napié Project.

On this note, Perseus group exploration manager Doug Jones said, “Perseus recognises the potential demonstrated by results from Mako’s exploration at Napié to date, but has decided its primary focus must remain on its core assets whilst retaining exposure to the exploration up-side at Napié.

“We believe the project is in good hands and look forward to continuing positive news flow as Mako advances its programs over the coming months.”

The recently completed exploration campaign has delivered impressive outcomes with drill results including 28 metres at 4.9 g/t gold and 25 metres at 3.4 g/t gold.

With assay results expected shortly there is the potential for further share price momentum after the company’s shares increased nearly 20% in late June/early July.