Analysts at Macquarie Wealth Management highlighted in a recent review (Australian Gold Miners: 12 September 2016) of the global gold sector that there had never been a better time to build an Australian gold mine with developers benefiting from low operating and capital costs, highly skilled workforces and contractors, as well as the benefits of a lower Australian dollar relative to the US dollar.

The broker’s preferred plays among miners in the development stage are Gold Road Resources (ASX: GOR) and Dacian Gold (ASX: DCN). However, in the last 12 months shares in Dacian Gold have increased from circa 50 cents to recently hit a high of $4.00 (+700%) and are currently trading within 10% of that mark.

GOR’s shares more than doubled in 2016 to hit a high of 75 cents, but have retreated to 60 cents in the last two months.

It should be noted here that analyst’s forecasts and price targets may not necessarily be met. Similarly, historical trading patterns should not be used as the basis for an investment decision as these may not be replicated in the future.

A large percentage of gold stocks that rerated strongly in the first half of 2016 have come off over the last two months as sentiment towards the sector cooled.

This is reflected in the S&P/ASX All Ordinaries Gold index (XGD) which hit a high of 5760 points in July, but has since fallen to yesterday’s close of 4664 points, representing a decline of nearly 20%.

Examining individual stocks in the universe of companies covered by the broker and taking into account averages for both global and Australian based developers there was one company in Blackham Resources which sits outside its area of coverage that had comparatively compelling fundamentals.

Blackham Resources (BLK) is at an attractive stage in that much of the hard capex intensive work has been done in terms of development, and material production is imminent.

Of significance though is the fact that production is poised to ramp up substantially over the next 2 to 3 years as the company expands existing projects and increases output by tapping into its four large gold systems which have a combined resource of circa 5 million ounces.

Consequently, there is better visibility around costs, production and earnings than is generally the case with developers that are more than a year out from maiden production.

While management anticipates combined production to hit the circa 200,000 ounces per annum mark in the medium term, in order to make meaningful comparisons with companies analysed by Macquarie we have focused on the group’s fiscal 2018 profile. 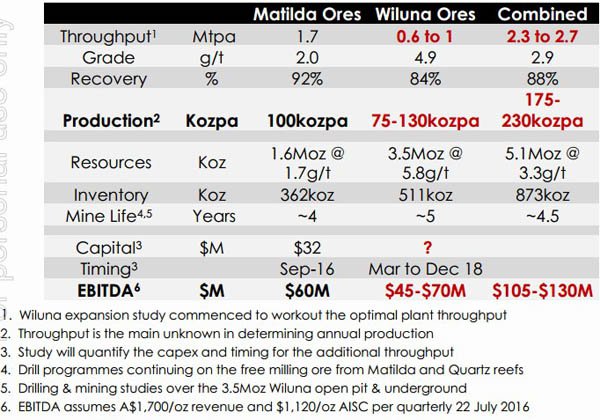 As is the case with any stock, BLK’s metrics are impacted by share price movements and it is worth noting there has been a pullback from a 12 month high of $1.18 to Tuesday’s close of 76.5 cents since sentiment towards the sector waned.

Given that this represents a 35% decline, substantially more than the pullback in the gold index, the company’s current trading range may represent a useful entry point. As a means of reference, the 12 month consensus price target is $1.15.

Reg Spencer from Canaccord revised his numbers in mid-August, prompting an increase in BLK’s price target from $1.05 to $1.20, implying upside of nearly 60% to yesterday’s closing price.

The numbers tell the story

Based on BLK’s current share price it has a market capitalisation of $216 million. The company had net cash of approximately $3 million taking into account debt of $29.3 million as at June 30, 2016. Consequently, its enterprise value is approximately $213 million.

The average enterprise value to EBITDA ratio of Macquarie’s universe of Australian junior ‘intermediaries’ (currently producing, but ramping up production in the near to medium-term) relative to fiscal 2018 projections is four.

BLK’s fiscal 2018 enterprise value to EBITDA ratio is 2.2 relative to Canaccord’s expectations of the company achieving EBITDA of $95.4 million in that year.

Analysts at Macquarie highlighted the impact of historical trend whereby the Australian dollar generally falls in the event of US dollar gold weakness, effectively providing a hedge for Australian gold producers. Consequently, Spencer’s projections look close to the mark.

Using a PE multiple comparison, BLK really comes into its own, trading on a fiscal 2018 PE of three. This compares with Macquarie’s average junior Australian producer intermediary multiple of 10.

Canaccord is forecasting BLK to generate a net profit of $62.9 million in fiscal 2018, implying earnings per share of 25 cents. Applying the average PE multiple of 10 would imply a share price of $2.50, a premium of 230% to yesterday’s closing price.

Remember, past share price performance do is not guarantee future performance and a professional financial advisor should be sought if considering this stock for your portfolio.

Consequently, comparisons of metrics as outlined above suggest that BLK could rerate in the near term, but at the very least outperform its peers if sentiment towards the sector (particularly Australian producers) recovers.