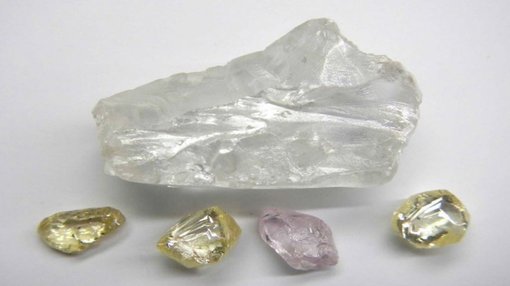 Lucapa Diamond Company (ASX:LOM) now thinks it could have more diamonds on its hands after confirming the presence of kimberlite next to its main diamond project in Angola.

It told the market in a pre-open announcement that pitting on a possible kimberlite target (L259) next door to its Mining Block 8 prospect had been firmed up by a trenching program.

Kimberlite is an igneous rock which is known for containing diamonds, and the fact that it’s right next door to its existing diamond block filled LOM with confidence.

“This makes L259 a compelling target as we close in on our major goal at Lulo, which is to find the primary kimberlite source or sources of the exceptional alluvial diamonds we are recovering on a daily basis,” LOM chief executive Stephen Wetherall said.

“The area we have recovered kimberlite from in our ongoing pitting program also suggests this to be a significantly sized kimberlite.”

Kimberlite found in an area adjacent to Mining Block 8

It said that it had managed to find the same kind of kimberlite in pits more than 1km apart, suggesting a wide area of discovery.

The kimberlite is located about 500m north east of the area where mining first commenced at LOM’s flagship Block 8 alluvial diamond field.

So far, LOM has recovered 31 ‘specials’ from the block following the start of mining on August 10 this year.

It said it would now step up pitting and exploration on the kimberlite target, and has been trying to source a rig to conduct early stage delineation drilling.

LOM will also conduct pitting on the outer rim of the kimberlite area to figure when and where bulk samples can be excavated.

By bulk sampling, LOM will be able to get an idea of the diamond content of the kimberlite.

Meanwhile, it also announced an extension of Mining Block 8 due to ongoing pitting in the area.

LOM said the pitting had in effect extended the boundary of the Block 8 ‘paleopacer’ by 800m north and 800 west.

Since September 24, LOM shares have been on a rocket, rising by 261% to yesterday’s closing price of 47c.

On September 28, LOM said that it had found so-called ‘large special diamonds’ during a pitting program at the prolific Block 8 at the project – including a 90.32 carat gem.

The finds were on the same block where a 131.40 carat diamond was found during preliminary bulk sampling back in 2012.

LOM is the operator of the 3,000km2 Lulo Diamond Concession in Angola’s Lunda Norte diamond heartland.

Lulo is located within 150km of Catoca, the world’s fourth biggest kimberlite diamond mine, and on the same favourable geological trend (Lucapa Graben).

Lucapa and its partners commenced alluvial diamond mining operations at Lulo in January 2015. The Lulo alluvial diamonds sold to date have achieved average sale prices of $1668 per carat.

Lulo also hosts 296 kimberlite targets in two separate provinces, of which 96 have already been classified as proven and probable kimberlites and four confirmed as diamond-bearing pipes.