These investigations have provided a refined regional model that is consistent with classic geology models and bears considerable similarities with many tier-one porphyry discoveries along the mid-Cauca porphyry belt.

The timing couldn’t be better for a continuation of strong gold-copper exploration results - not only has gold put on US$100 per ounce in the last month, but just last week copper to be delivered in three months rose to $10,417 a metric ton on the London Metals Exchange, surpassing its previous all-time closing high of $10,160 from February 2011.

The following chart puts into perspective the extent of the rally that has occurred with the red metal approximately doubling in price in a mere 12 month period. 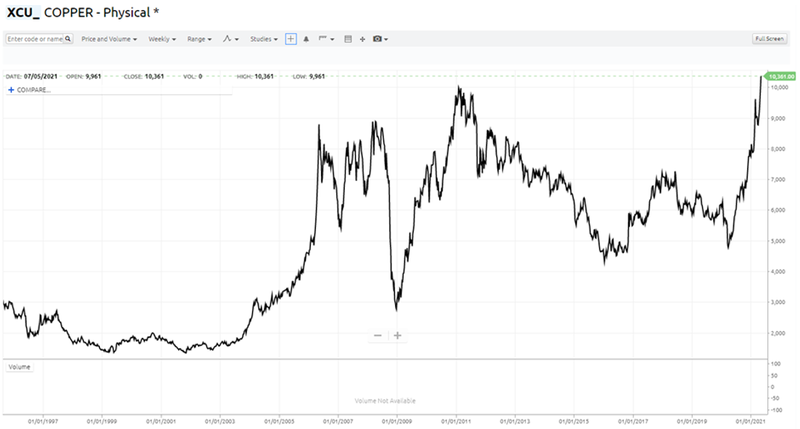 Gold is also going gangbusters, but by the same token could be regarded as slipping under the radar.

When the precious metal pushed above US$2000 per ounce to hit an all-time high in 2020, it seemed to go unnoticed that these were euphoric levels that were bound to result in a retracement of sorts.

In fact though, the retracement has been fairly moderate, and with gold having increased 9% from about US$1686 per ounce to US$1836 per ounce in the last six weeks this could be the start of a substantial rally.

Once again, the following chart puts things into perspective with the current price sitting well to the top of multi-decade levels. 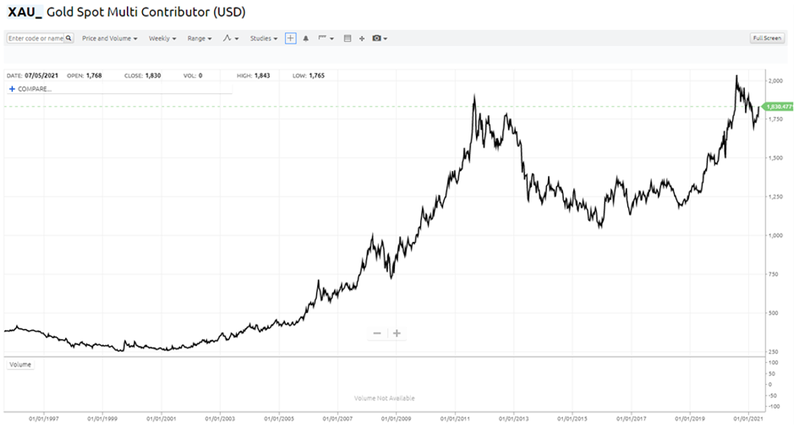 In fact, if we look at the range between the low of just over US$1000 per ounce in about 2016 and last year’s all-time high, the current price is about US$700 per ounce above the low point, but only circa US$300 per ounce shy of the all-time high.

Harking back to Los Cerros, bear in mind that the group delivered with the drill bit consistently in 2020/2021, and it was only about a month ago that the company delineated an outstanding intercept of 460.9 metres grading 1.11 g/t gold.

This was the best drill hole ever recorded in the entire Quinchia District.

As shown below, the Miraflores gold deposit and Tesorito South porphyry may be ‘bookends’ of a much larger central system, potentially elevating the significance of Quinchia amongst its multi-million-ounce neighbours. 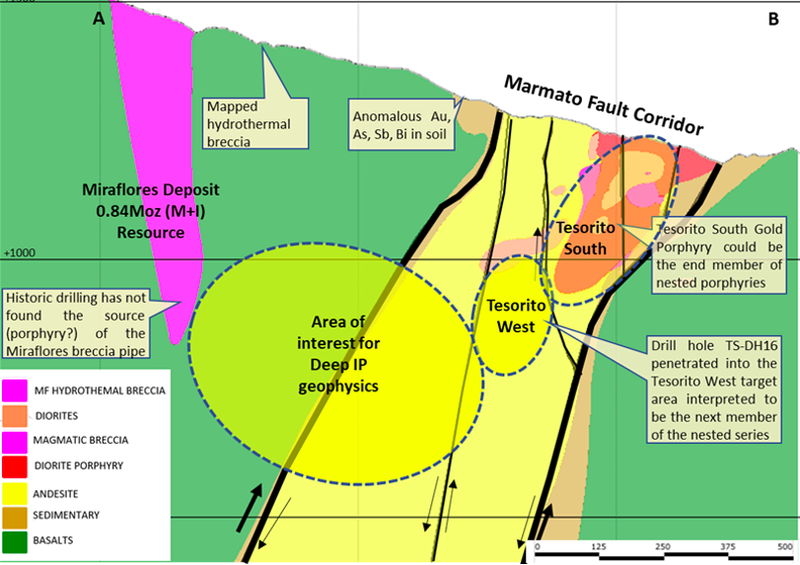 A drone based magnetic survey is intended to cover an area of 15 square kilometres and will be focused on known targets from south of Chuscal, northwards along the Marmato Fault Corridor, over Tesorito and extending to the company’s northern licences which host several targets including Santa Sofia and Los Loma plus the Inferred Resource at Dosquebradas as indicated below. 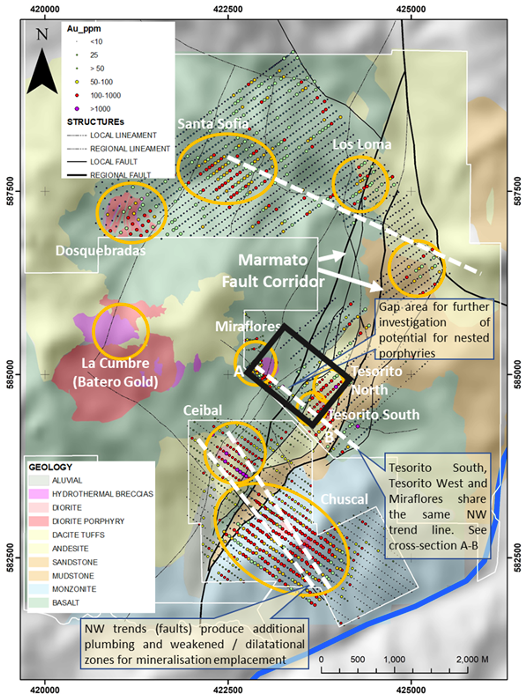 Field work has not been undertaken by the company on these northern targets to date.

A deep IP program will initially cover Tesorito (South and North) and continue westward to Miraflores to better define the structures that have localised these two deposits.

The survey will also investigate the presence of sulphides associated with an interpreted larger causative porphyry system that may be the source of the Miraflores hydrothermal breccia ore body in the gap between Tesorito and Miraflores which is in the order of one kilometre.

The Marmato Fault Corridor, comprising a series of north-south trending crustal-scale faults, provides the setting for emplacement of mineralised porphyries.

Tesorito South is interpreted to be one of the nested porphyries.

Drill hole TS-DH16 is interpreted to have drilled through the Tesorito South porphyry and into the next porphyry in the nested series (Tesorito West) to generate the continuous intercept of 629 metres at 0.88 g/t gold (553gram.metres) from surface including 582.3 at 0.94 g/t gold from surface.

The presence of a larger causative porphyry in the Miraflores-Tesorito West gap would represent another member of the nested porphyry suite of intrusions preserved by faulting within the corridor structure.

This theory is supported by the recent identification of hydrothermal breccia, interpreted to be part of a porphyry system within the gap and coincidental with previously defined soil gold anomalism.

Home to many 4 million ounce plus gold porphyry systems

"At Quinchia we see Tesorito South, Tesorito West and Miraflores all sitting on the same north-west trend within the broader north-south orientated regional faults.

"Importantly, in the gap between Miraflores and Tesorito West we have mapped hydrothermal breccia and sampled gold anomalous soils as evidence of a potential underlying porphyry.

"This raises the possibility that a larger and central porphyry, consistent with the north-west trend line is the causative source or ‘engine’ of the 0.43Moz Reserve open at depth) that defines the Miraflores hydrothermal breccia pipe - and is part of the nested porphyry series.

"We are particularly intrigued to learn the outcomes of the deep IP program planned, as this can see down to 700+m and is expected to illuminate major structures and areas of interest to maintain drill program intensity for the remainder of 2021.”