This has prompted LCL to redirect a second rig in order to fast track the investigation of what is viewed as ‘’an exciting new porphyry target’’ within the broader Quinchia Gold Project in Colombia.

The emerging gold-copper play has embarked on its largest year of exploration drilling to date, with a view to uncovering the true size potential of the Tesorito and Chuscal porphyry prospects at its Quinchia Project in Colombia, a cluster of porphyry targets surrounding the Miraflores Gold Deposit that includes the Tesorito surface porphyry and the porphyry targets at Chuscal.

Managing Director Jason Stirbinskis is hoping Ceibal can replicate Tesorito, saying, “The strong surface channel results and encouraging visuals from the first drill hole, combined with the ideal structural setting for potential porphyry occurrence, has prompted us to accelerate drilling at Ceibal.

'The close proximity to Tesorito and the similarity of lithology and structural setting bodes well for finding another Tesorito style, near-surface gold mineralised porphyry.”

Ceibal’s close proximity to Tesorito can be seen on the following map. 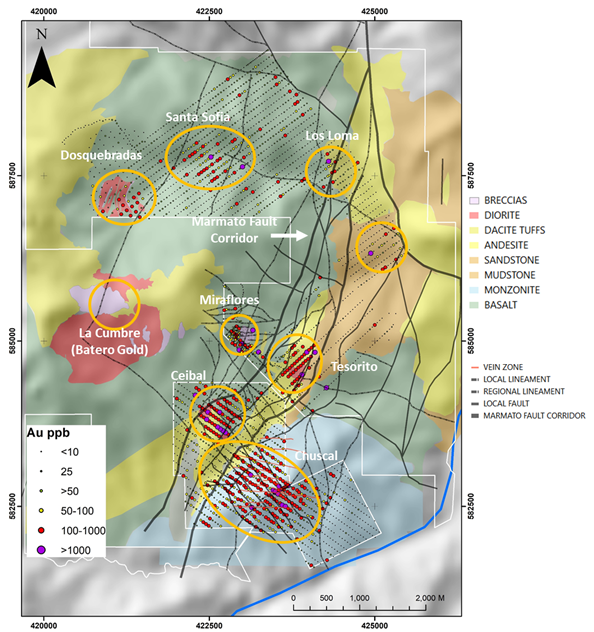 Similar drill core to those at Tesorito

From a geological perspective, CEDDH01, the first hole ever drilled at Ceibal, entered andesite at surface which bears considerable similarities to the andesite that forms part of the mineralised suite at Tesorito.

The hole ended at 500 metres in andesite with low vein density, suggesting a transition out of the zone of interest, which is consistent with a decrease in surface geochemistry anomalism directly above end-of-hole (EOH). 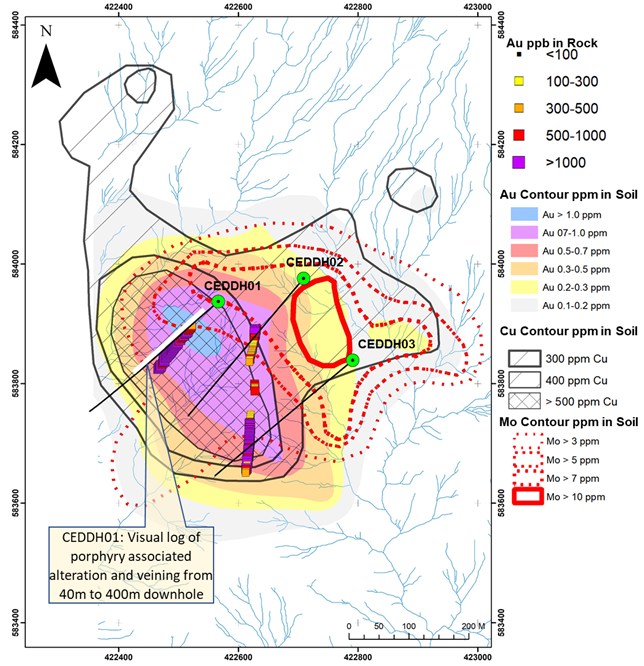 Whilst assay results are not expected until mid-June, management’s degree of enthusiasm supported by the geological comparisons to the Tesorito South porphyry suite was sufficient to direct a second rig to Ceibal.

As indicated above, holes CEDDH02 and CEDDH03 are each on drill lines of about 100 metre spacings east of CEDDH01, suggesting results from those holes could well throw some light on what could be another significant mineralised orebody.