Los Cerros set to finish the year on a high

Los Cerros Limited (ASX:LCL) confirmed today that its newly purchased diamond drill rig is in the process of being commissioned, providing the company with more exploration options with a particular focus on potentially expanding the 877,000 ounce Miraflores Gold Deposit.

The rig will initially be assigned to Miraflores, taking the company’s drill program to three rigs drilling concurrently across three sites within the Quinchia Project, being the Tesorito Prospect, Chuscal Prospect and now also at the Miraflores Gold Deposit.

With multiple irons in the fire, Los Cerros is positioned for a strong finish to the year after exploration results have already provided significant share price momentum since June.

The group’s shares have increased more than five-fold in the second half of calendar year 2020, and with exploration at Miraflores where the company already has an established resource, as well as having completed a definitive feasibility study (DFS), the company could be on the verge of a stellar finish to what has been a watershed year.

Management anticipates that the use of its own rig will bring efficiencies and savings not usually available through conventional service provider arrangements.

Los Cerros is in a unique position in that it can commission the rig alongside two other rigs and leverage the expertise of the drilling service provider during the important commissioning process.

Commenting on the significance of these developments, particularly at a time when the gold price is much higher than when the DFS was originally completed (US$1270 per ounce), managing director Jason Stirbinskis said, “This will be the first drill program that Los Cerros has drilled at Miraflores since before the DFS was completed by prior management in October 2017 in what was a very different gold price environment.

‘’The new executive team’s fresh re-evaluation of the geological model has created considerable opportunity for drilling a potential boost to grade and/or tonnes at Miraflores which has delivered very encouraging intercepts in historical drilling.

‘’The drilling program is a critical input into any subsequent potential re-assessment of the Miraflores Resource and its role in the broader Quinchia Project of which Miraflores, Tesorito and Chuscal are a part.”

The other projects Stirbinskis refers to and their proximity to Miraflores is outlined on the following map. 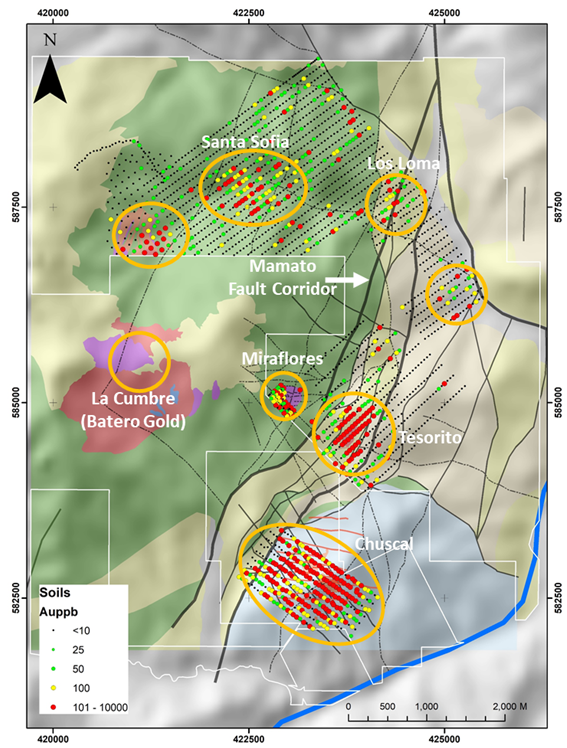 Consequently, while the precious metal retraced from about US$1910 per ounce to US$1880 per ounce towards the end of last week, in relative terms this is insignificant.

On this note, it is worth referring to the DFS metrics completed on Miraflores as indicated below.

As the table above shows, even a US$100 per ounce increase in the gold price to US$1400 per ounce from the base case US$1300 per ounce applied in the DFS was estimated to lift average life of mine underlying earnings (EBITDA) from US$29.4 million to US$35.8 million.

Obviously, an increase of US$600 per ounce would exponentially increase the bottom line, as well as feasibly increasing the quantum of the economically viable resource estimated to be mined that may previously have been deemed not to meet the cut-off grade.

The Miraflores Gold Deposit is on the side of a hill overlooking the Tesorito southern porphyry which is approximately 900 metres downhill and onto the valley floor as indicated on the above map.

From a geological perspective, Miraflores comprises intermediate sulphidation epithermal mineralisation in the form of a breccia pipe with a diameter of 250 metres x 280 metres, extending 600 metres vertically where it widens and remains open at depth.

More than 20 sheeted veins, predominantly north-west trending, cut the breccia pipe and carry the highest gold values, in particular where the 220 and 800 vein sets intersect to form shoots within the white-grey breccia.

Recently completed drill core re-logging and 3D modelling has revealed that the aforementioned sheeted veins and white-grey breccia, potentially remain open in some directions and are more widespread than previously assumed.

The drill program, initially comprising 4 to 6 holes for a total of about 1000 metres (see below), will explore zones both within the current resource model and extensions to the resource where sheeted veins or white-grey breccia are interpreted. 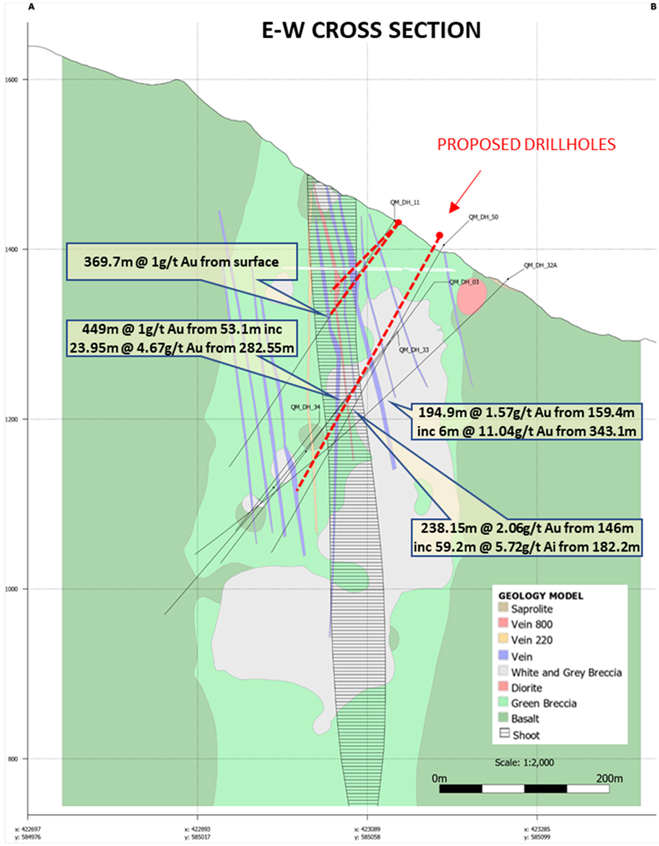 These included intersections of 449 metres and 370 metres, both grading 1 g/t gold.

There were also other sizeable intersections featuring high grade gold, and these included two intersections of 60 metres grading approximately 5.5 g/t gold and 5.7 g/t gold, as well as another 10.6 metre intersection grading 12 g/t gold.

Consequently, it wouldn’t be surprising to see the company’s shares rally ahead of this current drilling campaign as investors bank on the release of promising exploration results.

Drilling at Tesorito, Chuscal and Miraflores to top off a good year

The current expanded drilling program broke ground mid-August and has completed seven holes for a total of 1,963 metres.

Importantly this drilling revealed strong indications for a nearby porphyry at similar depths to the southern Tesorito porphyry.

Holes TS-DH10 and TS-DH11 tested the eastern and western extremes of the southern Tesorito porphyry, and assay results are expected in early November.

The rig has returned to Tesorito North to test vectors and pathfinders encountered in TS-DH09, the second result referred to above.

Current drilling at the north will allow time to refine 3D models of the southern porphyry before the rig returns to further explore lateral and depth extent of this mineralised system.

As indicated below, these as well as CHDDH008 which is in progress, were designed as short holes, pursuing near-surface gold in epithermal vein systems and providing critical structural and vector information to assist in targeting the deeper mineralised porphyry(ies). 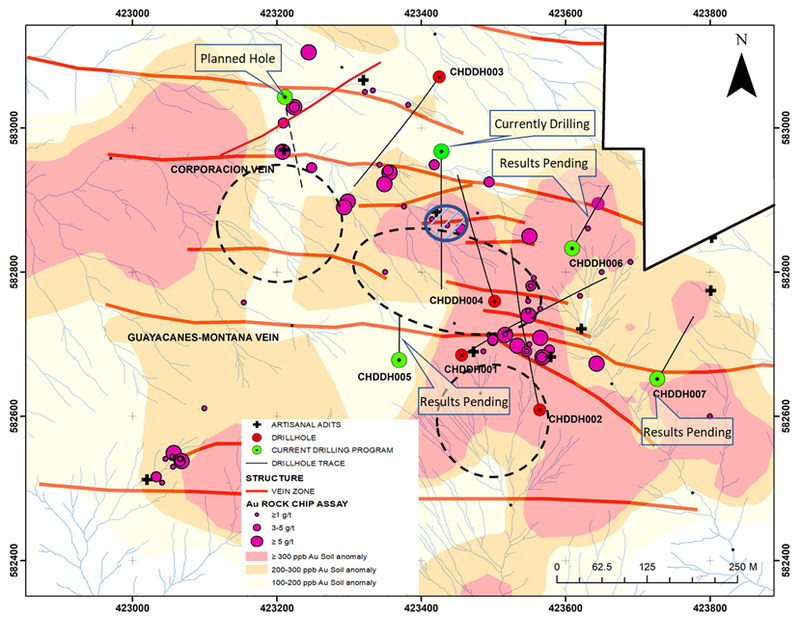 Discussing what lies ahead in 2021, Stirbinskis said, “We expect the above programs described at Miraflores, Tesorito and Chuscal will see us through to year end.

‘’We anticipate the new year will see us infill drilling at Tesorito south, further developing Tesorito north and drilling for the porphyry, or more likely porphyries, that are behind the expansive Chuscal surface anomalism.

‘’At Miraflores, the aforementioned drill program is a critical input into the next steps of exploration with several pathways to consider once results are in-hand.

‘’The company is well-positioned to continue its exploration program at pace and maintaining the current momentum into 2021.”