Los Cerros Limited (ASX:LCL) has updated the market in relation to its endeavours to better understand the epithermal vein hosted component of its Chuscal prospect.

This forms part of the recent and planned activity at the company’s Quinchia Project in the prolific mid-Cauca gold porphyry belt of Colombia.

Management has three main areas of focus ahead of the next drilling campaign.

Los Cerros completed the Chuscal maiden drilling program in January 2020, the results of which continue to yield important information which is being incorporated into regional datasets and geological models.

Chuscal’s appeal is the presence of two styles of mineralisation, porphyry associated gold providing a low grade disseminated background level of mineralisation which is overprinted by epithermal veins, including a final pulse or episode of vein emplacement which is higher grade gold associated with carbonate base metal (CBM) style mineralisation.

It is the overlap of one style of mineralisation over the other that has the potential to produce bulk zones of economic grade.

The application of pathfinder elements/minerals, mineral alteration and various signature ratios has refined the potential drill targets and provided further validation that both remain compelling targets for the discovery of gold porphyry mineralisation.

Current field programs have also sought to improve management’s understanding of the epithermal vein hosted component of the Chuscal prospect, particularly the east-west trending Corporacion vein set intercepted in DDCH003 which assayed 0.4 metres at 31.8g/t gold from 253.3 metres within a wider zone of 6 metres at 2.97g/t Au from 250 metres.

This intersection is extrapolated to surface to correlate with a high grade zone of soil anomalism and an artisanal mine and is extrapolated at depth to potentially intersect the Corporacion porphyry target as illustrated below. Management has received some encouraging results from recent field work, resulting in an extension of the Corporacion vein set to the east and west to a strike length of 800 metres.

High-grade surface grab samples have been a feature of the field work that has been conducted and these included 6.68g/t, 4.73g/t and 4.62g/t gold. 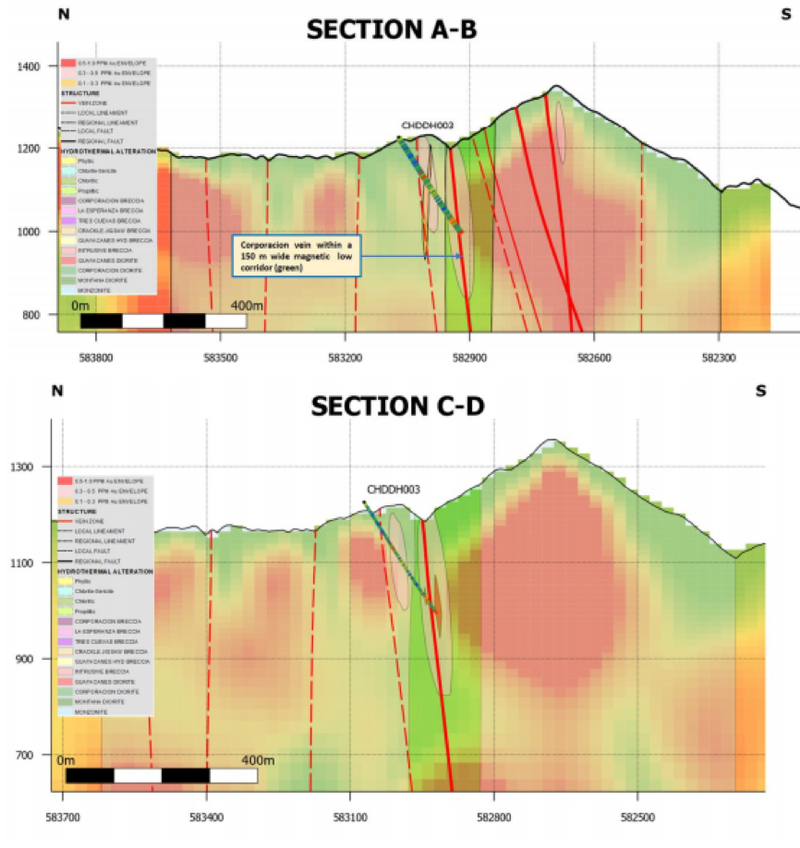 As indicated above, DDCH003 is the only hole which has intersected the Corporacion vein and further drilling along the 800 metre long strike to test for shallow high grade gold is clearly warranted.

Corporacion vein metal zoning, the presence of carbonate base metal (CBM) assemblages and alteration assemblages are interpreted to represent the final mineralised pulse from a buried causative porphyry.

Commenting on these findings and outlining the company’s exploration strategy, managing director Jason Stirbinskis said, “We are thinking both tactically and strategically with this next drill program.

‘’Tactically we want to establish that the epithermal vein pulse - the veins that have sustained the artisanal workers for several generations - can be targeted.

‘’If these higher grade veins are close to surface and show continuity they offer a supplemental feed to boost the economic viability of the Miraflores Project and a pathway to early production.

‘’Strategically, the pursuit of the porphyry source(s) responsible for the extensive background gold throughout Chuscal might elevate Quinchia (Chuscal, Tesorito, Miraflores) to the ranks of the large scale discoveries of the Mid-Cauca Porphyry belt.’’

In addition, the completion of current modelling and near-term planned field work, including IP, are likely to also elevate Tesorito to part of the next drill program.