The drilling program consisted of four diamond holes and represents the first drilling to occur at the Chuscal Prospect.

Chuscal is a gold porphyry and vein target within the Quinchia Project which also hosts the Tesorito Prospect and the established Ore Reserve at Miraflores, all within a two kilometre radius. 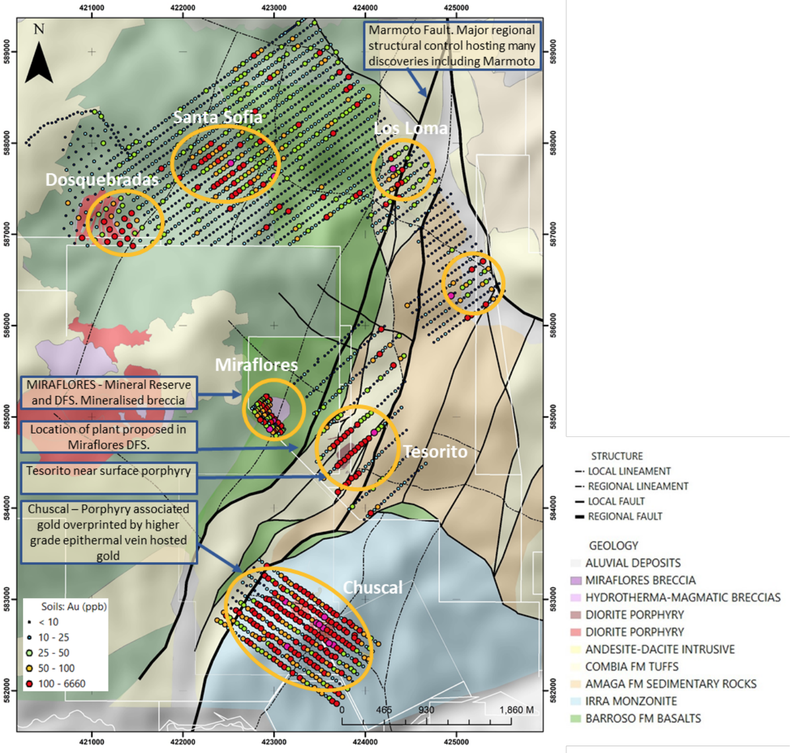 The Quinchia Project consists of numerous discoveries within a 3km radius

The final hole (CHDDH004) of the four hole Chuscal program was designed to complete the first pass testing along the core of the 900m strike of the Chuscal gold in soil anomaly and to demonstrate continuity of regional gold bearing structures by testing the 500m interval between holes CHDDH002 and CHDDH003, both of which encountered porphyry associated gold and vein hosted gold.

Drill hole CHDDH004 intercepted regions of vein gold at depths predicted in the regional structural model, adding weight to the validity of the model for the distribution of epithermal vein related gold and silver.

The best result was encountered near surface and correlated to the Guayacanes corridor which hosts a series of horsetail faults containing old artisanal workings.

Results from prior holes:

Metminco’s Managing Director, Jason Stirbinskis commented; “In the context of a maiden drilling program into a large porphyry/epithermal system, the results from CHDDH004 in conjunction with results from the other three holes are significant and pleasing.” 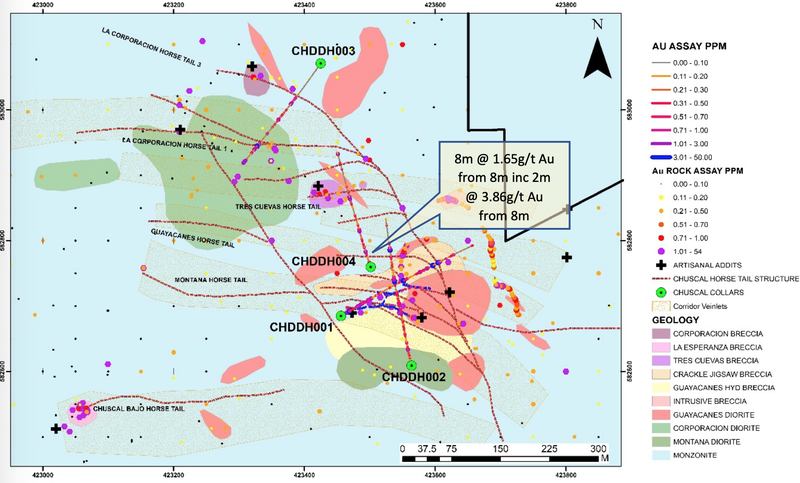 Chuscal has been of great interest to its various previous owners for several decades including recently when held by AngloGold Ashanti.

The prospect sits within a porphyry cluster (dominantly controlled by Los Cerros) within a very prospective region of the mid-Cauca porphyry belt and is defined by a significant surface gold geochemical anomaly. The possibility of a material discovery is considered high.

Los Cerros was the first company to secure permissions to drill Chuscal and the recently completed maiden drilling program has dramatically increased the understanding of the target and, as new data is assimilated into regional models, the structural story will continue to evolve over coming months.

- Porphyry-associated gold is far more widespread than previously assumed, as evidenced by the moderate to very long drill core intercepts of lower grade gold over a strike of ~500m.

- Overprinting by Intermediate Sulphidation System (ISS) epithermal veins is far more extensive than previously modelled; is associated with a regional fault structure (horsetail) of 500m strike which remains open to the NW and SE and at depth; and occurred late in the geological sequence as veins can been seen to cut most rock units including breccias

- The Guyacanes Diorite is not the porphyry source (as previously assumed), but rather just one of many units containing porphyry associated mineralisation, suggesting a much larger regional system with the deeper causative intrusive(s) (porphyry) occurring relatively later.

Stirbinskis summarised; “Now that we have all the assay data, we will further test our hypotheses by conducting more detailed analysis of the geochemistry, including pathfinder ratios, to vector in on where all this porphyry associated gold might be coming from.

“We can also return to the oriented drill core armed with the geochemistry and extract critical information about vein sets, pulses and structures that will hopefully tell us what to look for to hit the high grade veins that have been the driver of artisanal miners for generations. This is a big, complex system!”