Los Cerros Limited (ASX:LCL) has today provided an update on newly identified targets beyond the boundaries of the existing Miraflores gold deposit, part of the company’s Quinchia Gold Project in Colombia.

The newly targets identified have potential for high grade vein shoots and will be tested in the upcoming drill program.

Given recent improved understanding of regional geology, a recent review was of the foundations of the geological model was undertaken to better understand the distribution of gold bearing structures within the resource envelope and beyond.

Modern exploration at Miraflores commenced with 10 diamond holes drilled by AngloGold Ashanti and B2 Gold in 2006-2007, followed in 2010 by TSX-V listed explorer Seafield Resources.

Los Cerros believe that the considerable data set generated by Seafield Resources has not been fully interpreted and assimilated, and there is opportunity for a deeper understanding of the Miraflores structure and economic potential.

Recently completed drill core re-logging and 3-D modelling revealed several zones of interest both within the current resource model, but with sparse data, and also extending beyond the defined resource.

The highest gold grades occur within sheeted vein systems which cut white-grey breccia, which is believed to define a zone of hydrothermal boiling associated with deposition of gold mineralisation from the hydrothermal system.

It appears the 220/800 shoot remains open in both directions, creating two compelling targets for additional mineralisation. 3-D modelling also suggests the presence of other shoots parallel to the 220/800 vein set intersection. None of these vein intersections have been purposely targeted by previous drilling. 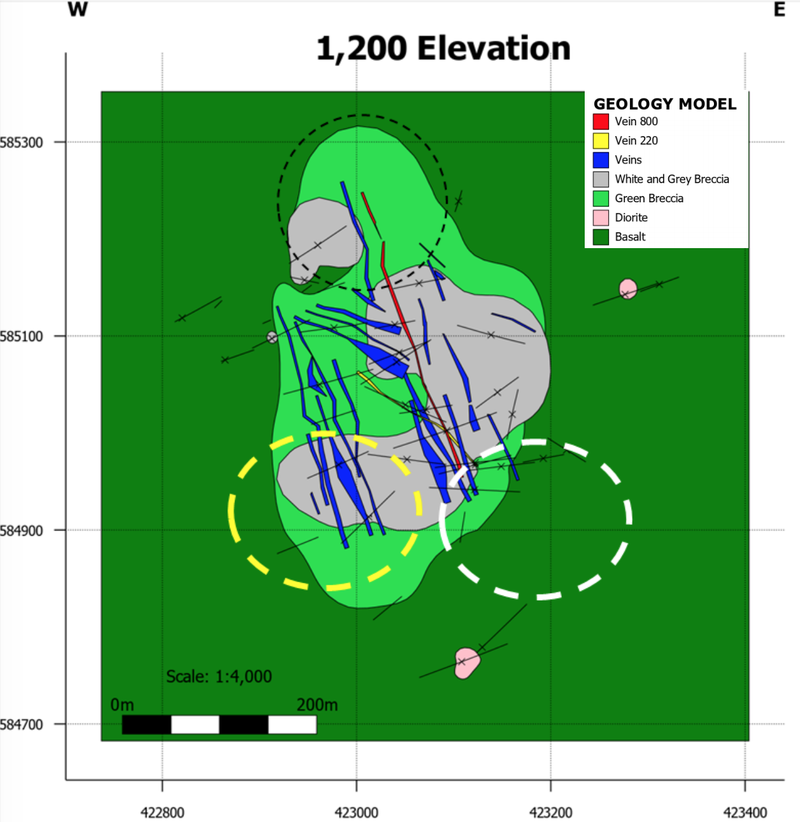 Modelling of high grade distribution has revealed three regions justifying further testing, two associated with the potential extensions of shoots - white dashed circle at depth and black dashed circle near surface in the above plan. The depth extent of white-grey breccia (yellow circle) has not been tested and is the third target.

Los Cerros’ Managing Director Jason Stirbinskis commented: "Many impressive intercepts at Miraflores can be spatially attributed to the white-grey breccia and the 800 and 220 vein sets. Better understanding of these associations has given weight to the potential continuity of high grade zones, which is an important factor when considering the practicalities of mining the ore and also provides areas of investigation for potential extensions of high grade mineralisation.

“The Company remains focussed on the investigation of Tesorito and Chuscal, both of which have great potential and are less than 2kms from Miraflores. However, this recent work by our geologists has elevated our interest in Miraflores, especially given strong gold forecasts and the advanced nature of Miraflores’ engineering and approvals. To test the modelling, Miraflores targets will be added to the planned drilling program at Tesorito and Chuscal.”

The study generated the following parameters based on a US$72M CapEx for a retreat long hole stope with backfill mining operation feeding a 1,300tpd conventional cyanide leaching facility, producing an average 4koz gold/month (48koz/year) over a 10 year operating life.

A construction and operations plan (PTO) based on the parameters described in the Miraflores feasibility study has been approved and the final significant mine construction approval is Environmental Impact Assessment (EIA). Much of the work towards the EIA has been completed but will need to be updated closer to the submission date.

Miraflores is part of the 7,500ha Quinchia Gold Project which also includes Chuscal and Tesorito Prospects and the Dosquebradas Deposit which has an Inferred Resource of 459,000 Au ounces grading 0.71g/t Au.

There are also additional early stage exploration targets within a 3km radius of Miraflores. Los Cerros’ regional strategy is to advance the targets within the Quinchia Gold Project and re-enforce a production scenario leveraging Miraflores and using the proposed processing facility as a central hub.

The company is also committed to accelerated exploration for large scale gold-copper porphyry targets such as Tesorito and Chuscal. Quinchia sits within the Mid-Cauca Porphyry belt which hosts many multi-million-ounce porphyry discoveries. 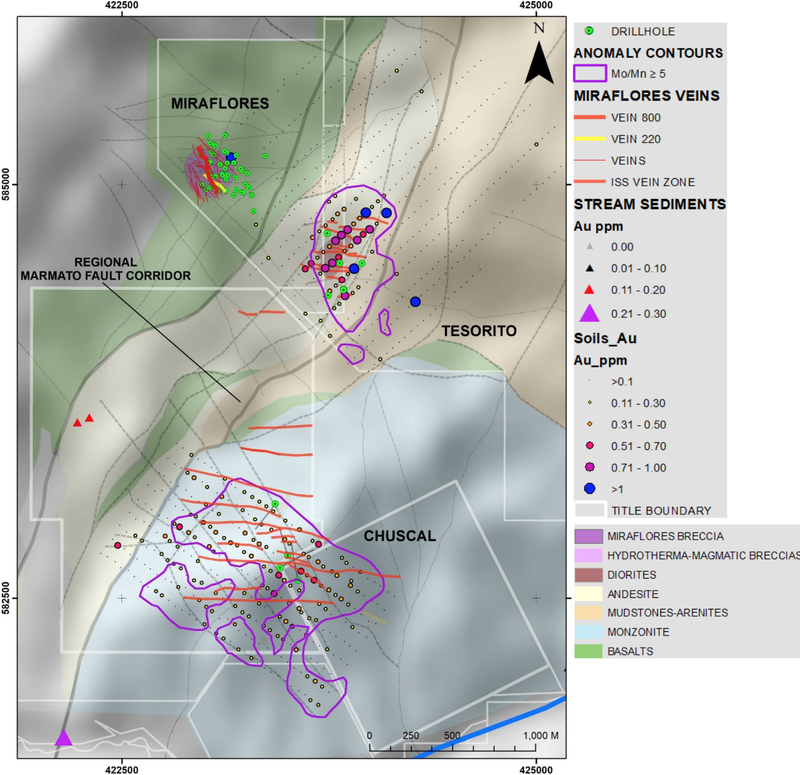 A subset of the Quinchia Gold Project. Note the general north-south trend of the anomalous zones – which reflects deep crustal controls extending for the entire length of the MidCauca Porphyry Belt. Locally, this regional influence is expressed as the major Marmato Fault Corridor

Los Cerros recently placed orders for a drill rig and supporting equipment as part of the Los Cerros / Hongkong Ausino Strategic Partnership Agreement (SPA). The SPA is a significant strategic initiative by Los Cerros to fund ~$2M of drilling and geophysics activity across the company’s extensive and highly prospective ~100kHa holding in Colombia and is expected to be the focus of on-ground activity for up to the next 18 months.

Through owning its own rig and similar assets, the company expects to realise material savings in its exploration programs in the long term whilst also driving a steady flow of drilling and geophysics activity.

As a priority, the company’s 2020 drilling program will focus on the Tesorito and Chuscal gold porphyry/epithermal targets and the Miraflores deposit, as mentioned above. The drilling is intended to start as soon as possible allowing for COVID-19 restrictions and shipping logistics.