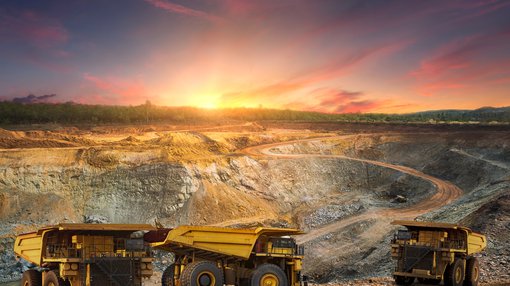 One of the most compelling gold-copper explorers on the ASX is Los Cerros Ltd (ASX:LCL) is drilling for gold in Colombia in a place called the Mid Cauca Porphyry Belt.

This region is home to many multi-million ounce gold discoveries.

Today, LCL announced it has hit a “spectacular” intercept of 460.9m @ 1.11g/t Au, with gold mineralisation starting from surface at TSDH16 (drill hole 16).

The outstanding results delivered so far from its Tesorito South exploration campaign continue to exceed expectations.

Better still, this seems to be just the start of what is unfolding as a spectacular gold system.

Drill hole 16 is the best ever recorded in the entire Quinchia District.

Such was the positive response to today’s news that the company shares opened more than 20% higher and continued to trade strongly throughout the morning session.

Here is LCL CEO Jason Stribinskis speaking at the CGS Mining conference (aka the Diggers n Dealers for Latin America) about the long high-grade porphyry intercepts at Tesorito.

Not only did this hit previous results out of the park, but it eclipsed any other drilling results conducted by any explorer in the broader Quinchia District - effectively, this elevates Tesorito South to a globally significant gold porphyry discovery.

Porphyry associated mineralisation is now demonstrated to continue below and south-west of a fault structure at 356 metres downhole, introducing the opportunity for more deep mineralisation in all directions. 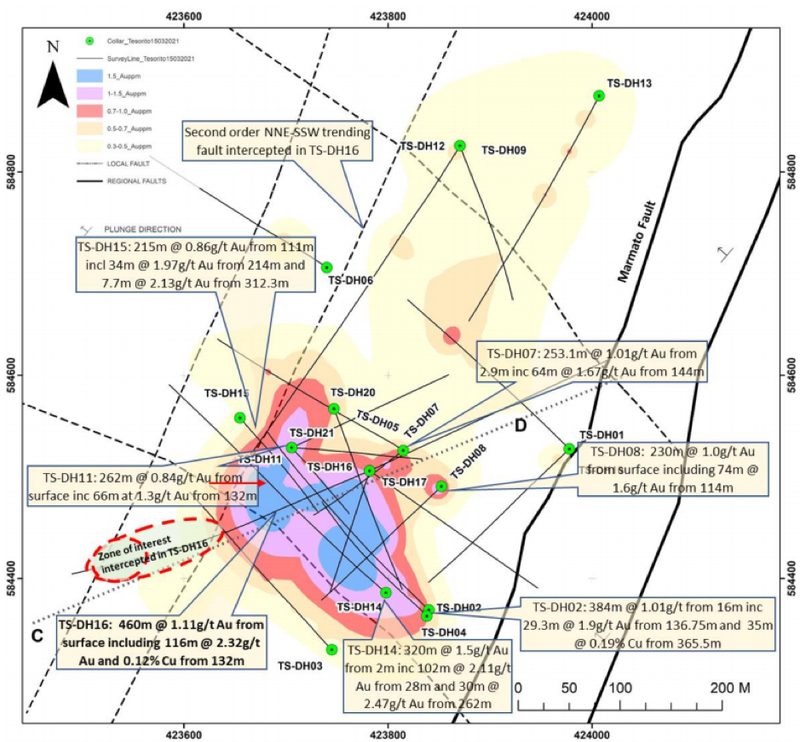 Whilst gold mineralisation started from surface, the drill core revealed higher grade mineralisation of the target porphyry suite from 90 metres down hole as indicated by increased porphyry signatures such as vein density.

One of the features of the drilling results was a 34 metre zone grading just over 3 g/t gold and 0.1% copper, the highest grade porphyry style mineralisation intersected at Tesorito South to date.

To put this in perspective, the west.com.au got pretty excited by Hot Chili’s results at its Cuerpo 3 porphyry prospect also in South America (Chile) when it delivered a drill result of 972 metres grading 0.5% copper and 0.2 g/t gold, saying that it ranked “up there with some of the all-time remarkable drill intercepts and is most likely the best hit anywhere in Australia, possibly even around the globe, for 2019.”

These grades pale into insignificance compared with the drilling results delivered by Los Cerros.

As a further means of comparison the multi-billion-dollar Newcrest Mining’s (ASX:NCM) highly economical Cadia Valley gold-copper porphyry operation in Australia has been delivering gold head grades of between about 1% and 1.2% over the last five years.

While these grades may seem modest, the low cost project (did by copper credits) is a cash cow for Newcrest.

This makes the grades that Los Cerros is delineating look pretty outstanding.

Miraflores is in advanced stages of approvals for mine development, and within three kilometres of Miraflores is the Tesorito near surface gold porphyry and the Chuscal porphyry target.

Consequently, in our mind a combination of the value of the in-ground resource, the fact that drilling results will feed into a much enhanced resource across multiple deposits, and the potential for further exploration upside provides an implied valuation well above that represented by the company’s current share price

Pending assays suggests there are further catalysts on the horizon

Results at depth have greatly enhanced the potential for Tesorito to be further expanded to the south-west, and will require a more thorough assessment, including multi-element analysis, to better understand the relationship between this new porphyry suite and the Tesorito South porphyry.

Assays are pending for an additional four completed holes at Tesorito South, all of which tested the lateral and depth extensions of the porphyry system.

We believe Tesorito South is developing into an exciting addition to the mid-Cauca porphyry belt which hosts many multi-million ounce gold porphyry discoveries as shown below. 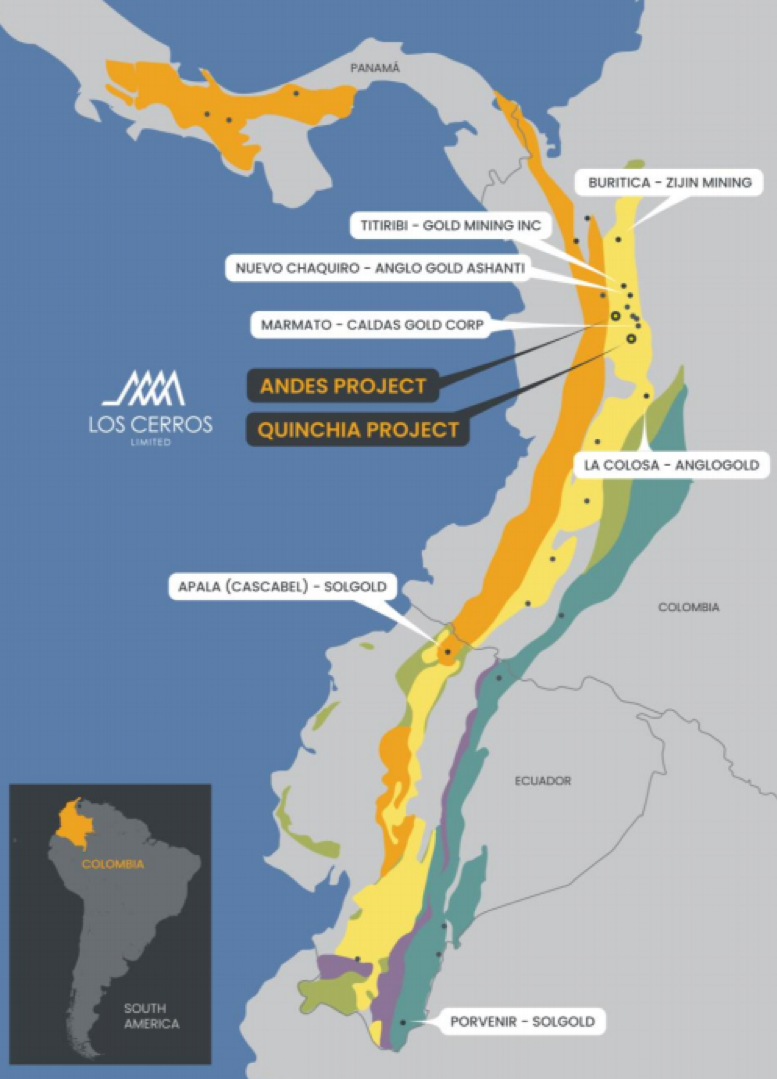 It should be remembered that the company has traded as high as 23 cents in the last 12 months, and when put into perspective, the retracement from 20.5 cents in January can be attributed to a decline in the gold price.

However, as most mining investors will be aware, the copper credits that feed into a gold-copper operation such as that which may be established as part of the Quinchia Project make for a very economical gold mining operation.

Consequently, these mines can deliver strong shareholder returns even during periods of lower gold prices.

Managing Director Jason Stribinskis summed up situation well in saying, “On a gram/metre basis TS-DH16 is the best hole ever recorded in the entire Quinchia district and has raised exciting questions about the potential scale of this gold system.

“The near surface (first 411 metres of this hole) has expanded to the south-west the modelled gold envelopes described by the high grade intercepts reported in the TS-DH02, ’14, ’11, ’15 drill fence and mineralisation still remains open to the south west.

“The company will offer further detail on interpretation of the porphyry suite intercepted below and south-west of the fault in coming weeks as we assimilate new drill data as it arrives.”