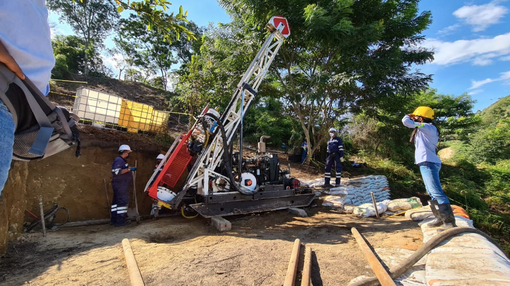 Los Cerros Limited (ASX: LCL) has continued to deliver highly promising results from drilling at the Tesorito South porphyry target, part of the Quinchia Project in Colombia with the latest hole (TS-DH14) returning the strongest porphyry gold intercept ever recorded by Los Cerros.

One of the major highlights is the 320m @ 1.5g/t gold drilled from surface at Tesorito.

Management highlighted that the wide higher grade gold intercepts are comparable to some of the best gold porphyry style intercepts of the entire prolific Mid-Cauca Porphyry belt that hosts several multi-million ounce gold and gold-copper deposits.

It is also worth noting that gold mineralisation remains open to the west and at depth below 300 metres.

Of course, this comes at a time when the commodity price environment couldn’t be better with copper hovering in the vicinity of eight year highs and the gold price receiving robust support around the US$1850 per ounce mark.

Hole TS-DH14 dramatically increases grade and expands the Tesorito South higher-grade envelope closer to surface and at depth as shown on the following map. 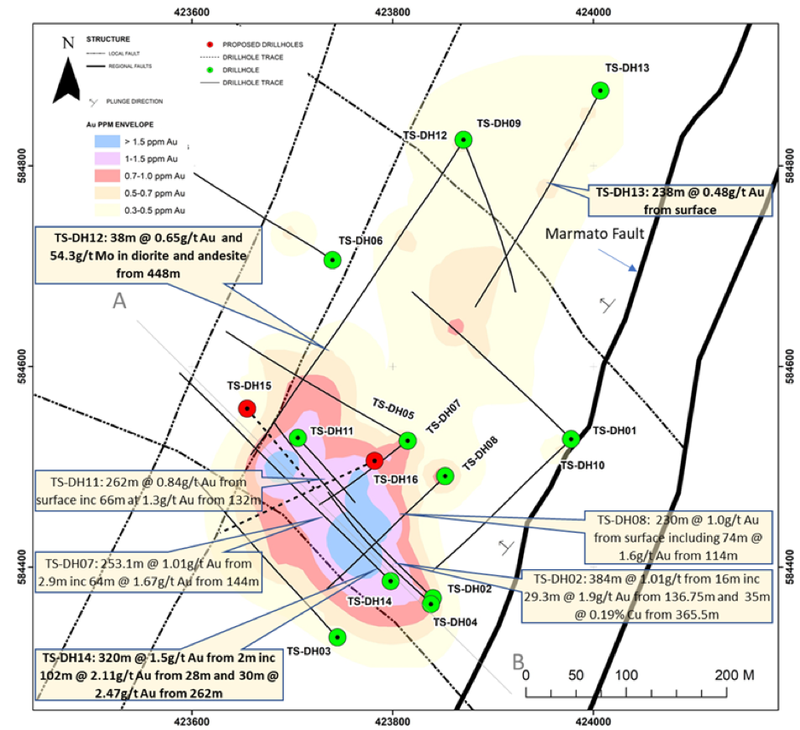 From a geological perspective, the hole intersected mineralised andesites, diorites and magmatic breccias below a thin layer of weathered saprolite and was terminated at 483 metres, remaining in the broader porphyry intrusive complex for the entire hole.

The result suggests that the higher-grade zone has expanded vertically, extending to within 2 metres of the surface and at depth.

The presence of relatively high grades at surface bodes well for driving strong mining economics in the early years of a potential development of Tesorito South.

Grades in excess of 2.0 g/t gold over an interval of more than 100 metres is a significant uplift compared to previous results, a potentially raising the potential grade of the higher grade zone itself.

Intersections of 102 metres at 2.1 g/t gold and 30 metres at 2.5 g/t gold are the highest porphyry style grades recorded at Tesorito to date.

Given the area’s potential to be developed as a gold-copper mine, the intercepted zone of elevated copper that featured 60 metres at 1.8 g/t gold and 0.12% copper from 250 metres is significant, and this is interpreted to be related to the deeper elevated copper zone encountered in a prior hole (TS-DH02 - 35m at 0.19% copper from 365 metres), raising the possibility of further copper mineralisation at depth.

These developments build on previous impressive drill results at Tesorito South as highlighted below:

Reflecting on previous drilling and underlining the significance of the results that have just come to hand in terms of laying the foundation for further drilling, Los Cerros managing director Jason Stirbinskis said, “Once again, our Tesorito South prospect has continued to shine, demonstrating remarkably wide and high-grade gold over a zone of 320m, and most importantly, this starts from only 2m below surface – making this a truly spectacular porphyry gold intercept, and upgrading the potential of Tesorito.

‘’TS-DH14 is a step in from drillhole TS-DH02 along a drill fence that includes TS-DH11.

‘’The hole also cuts roughly perpendicular to TS-DH07 and TS-DH08.

‘’All of these holes generated 230+m (downhole) mineralised intercepts from near surface with zones of higher grade within them.

"Even with these strong surrounding intercepts, TS-DH14 has exceeded our expectations in terms of grade and width to deliver the highest porphyry style gold grades at Tesorito to date and is a great start to infill drilling of the southern porphyry.”

TS-DH15 will test for western extensions of the higher grade zone (shown as dark blue on the drill traces below) and also test the dip of the mineralisation in relation to the adjacent Marmato Fault and associated basalts. 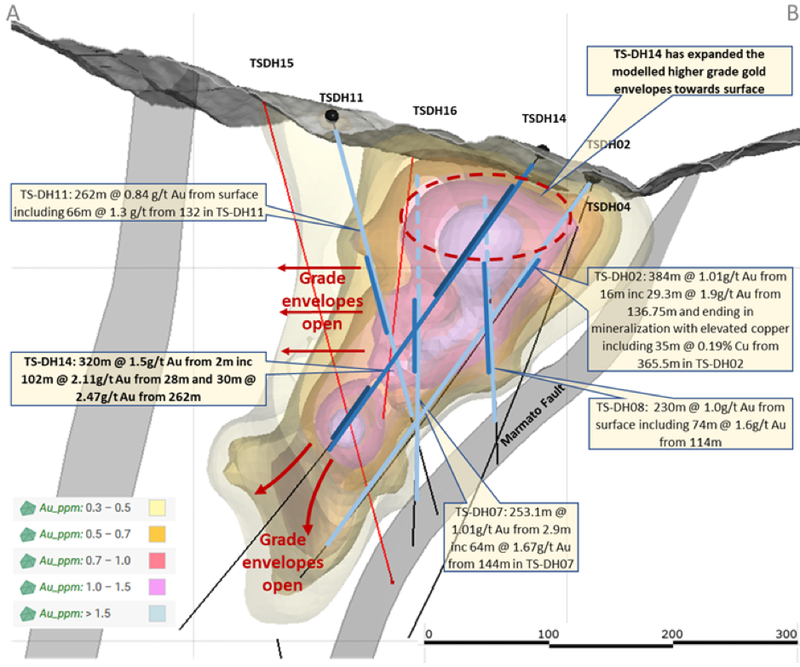 LCL will use DH16 to further define the high grade zone.

TS-DH12 intercepted a 60 metre zone of elevated porphyry associated gold grading 0.51 g/t and 52.5ppm molybdenum within diorite and associated magmatic breccia from 180.5m, believed to be the source of the magnetic high that TS-DH12 was designed to test.

Management is yet to determine if this mineralisation is attributable to the down plunge extension of the Tesorito South porphyry or a separate northern porphyry pulse.

Grades tended to vary significantly depending on depth with the sweet spot being around the 100 metre mark as shown below.

The sweet spot is around the 100 metre mark.

With the exception of the surface intercept, other TS-DH13 intercepts of note occur with elevated copper and molybdenum, suggesting a porphyry source of the mineralisation which, in conjunction with previously announced results from TS-DH09 (360 metres at 0.4 g/t gold from surface) further west, continue to suggest proximity to a higher grade porphyry source within the immediate Tesorito North area.

Stirbinskis confirmed that the group’s immediate focus will be Tesorito South, but he discussed the positive takeaways from Tesorito North drilling in saying, “TS-DH12 is the deepest hole drilled at Tesorito, straddling the northern magnetic high and entering the southern porphyry complex at depth and remained in the broader porphyry complex of altered andesites, diorites and breccias for the entire 671m.

‘’TS-DH13 remained within the porphyry complex before penetrating the interpreted Marmato Fault and entering basalt country rock at 460m.

‘’The abovementioned intercepts reported in TS-DH13, when combined with the results of TS-DH09 and supporting surface work, provides further encouragement for follow up drilling.

‘’The company’s current focus is on the Tesorito South target for a series of extension and infill drill holes before returning to further develop the Tesorito North target.”

Consequently there are numerous catalysts on the horizon, and it should be remembered that drilling has resumed at Chuscal hole CHDDH010, which began prior to the Christmas break.

Chuscal is a prospect within the cluster of targets that define the Quinchia Project and is located 2 kilometres south of Tesorito.

Management noted that complete laboratory assay turnaround time is currently at 6-8 weeks which will continue to impact on the timing of drill result announcements to the market.