Los Cerros Limited (ASX:LCL) has completed its first drill hole (TS-DH08) at the near-surface Tesorito gold porphyry, in a “highly encouraging start” to the company’s expanded drilling program at the Quinchia Gold Project in Colombia.

Tesorito is a near-surface porphyry and part of the larger Quinchia Gold Project, located in the Mid-Cauca Porphyry belt which hosts many multi-million ounce discoveries. Qunichia has a total combined Resource of 1.3Moz gold including a Reserve of 457,000 ounces at its Miraflores deposit.

The first diamond hole of the sustained program was successfully completed at 325m after intercepting potassic alteration with intense porphyry and epithermal veining interpreted to be the core of the Tesorito Porphyry.

The diamond drill program is ahead of schedule, with the next hole set to test the undrilled northern Tesorito surface anomaly.

The rig has now relocated to test the Tesorito northern surface anomaly as planned, while a second diamond rig has been contracted, that’s set to target high grade epithermal drilling at nearby Chuscal prospect in September.

This first drill hole — TS-DH08 — entered saprolite, interpreted to be weathered porphyry, from 7m and fresh diorite porphyry from 22m before leaving the diorite porphyry to enter basaltic country rock at 277m downhole.

The 270m wide intersection of diorite porphyry contains a 69m zone (downhole length) of potassic alteration with porphyry style veining overprinted by zones of intense epithermal veining from 131m which is interpreted to represent the porphyry core.

TS-DH08 was sited to test for continuity of encouraging gold intersections in previously drilled holes TS-DH07 and TS-DH024:

Los Cerros’ Managing Director Jason Stirbinskis said, “This is a highly encouraging start to our drilling program. Based on the preliminary visual drill log, we see consistency in the lithology, alteration and veining with what we see in previous holes TS-DH07 and TS-DH02 which were drilled 50m and 100m respectively from TS-DH08.

“The geologists have reported higher vein density than anticipated in some sections of the core, which is encouraging for gold grade in those sub-zones. These sub-zones include a 69m downhole intercept of potassic alteration from 131m to 200m, believed to be the porphyry core, which potentially correlates to a 64m wide zone of higher grade material at similar depth in TS-DH07.” The rig is currently being relocated to the northern target 200m north of hole TS-DH08, where an undrilled zone of anomalous gold and molybdenum in soils occurs concurrent with a magnetic high.

The company’s first hole of the current drill program (TS-DH08) has further explored the southern anomalous zone. The second hole (TS-DH09) will test the northern anomalous zone, defined by strong gold and molybdenum assays in soil over a magnetic high. 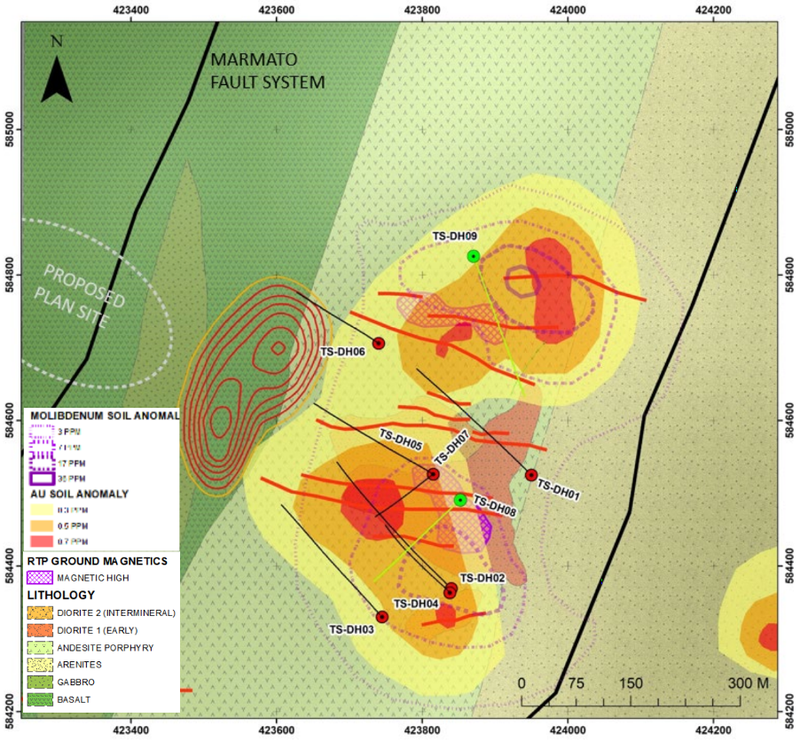 Tesorito is an at surface gold mineralised porphyry system

Ahead of the arrival of the company-owned diamond drill rig, anticipated in October 2020, Los Cerros will secure an additional contractor rig for a minimum 1,000m to 2,000m shallow diamond drilling program at the Chuscal gold target, just 1km south of the current drilling at Tesorito.

The second contractor rig is expected to arrive on site in mid-September 2020.

Subject to completion of current field work and modelling at Miraflores, the company-owned rig will be dedicated to exploration and resource drilling at Miraflores and/or the established porphyry targets at Chuscal.

In January 2020, Los Cerros completed a four-hole maiden drilling program which revealed that the ISS veins are far more extensive than previously modelled and are associated with a regional fault structure generating gold bearing veins in a dominant E-W direction with secondary veins or splays from these major veins also carrying mineralisation.

Vein related results from the recent drilling program include: 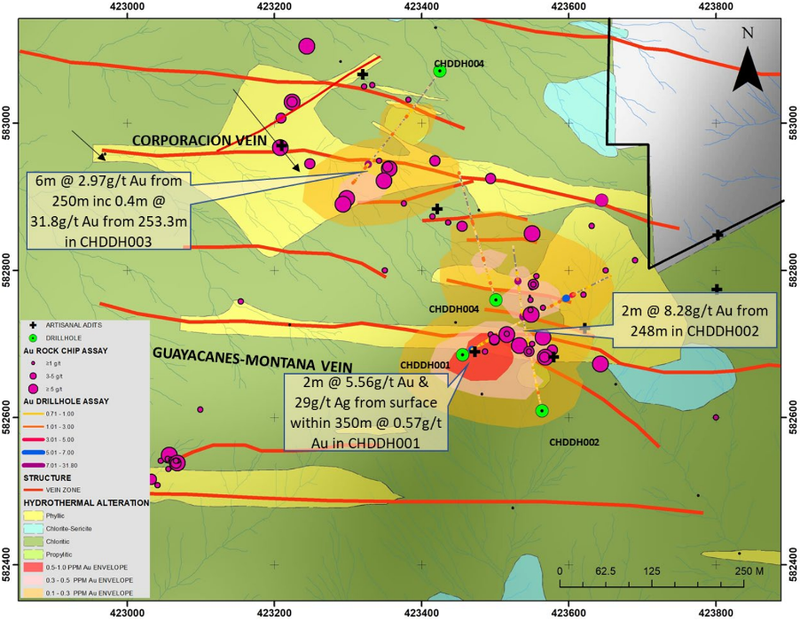 The Chuscal epithermal and porphyry gold prospect is within the Quinchia project, less than 2km from Tesorito and Miraflores deposits

The pending drill program is planned to consist of multiple shallow holes specifically targeting the strike extent of two major high grade vein sets – the Corporacion and Montana/Guyacanes veins, both of which are interpreted to be accountable for most of the above mentioned intercepts and have hosted successful artisanal miners for extended periods.

“We are in an enviable position following our recent capital raising, providing funding and optionality to pursue multiple gold targets within our Quinchia Project which in itself has the foundation of the Miraflores Feasibility Study and 0.475Moz mineral Reserve.

“We are also expecting the arrival of our own drill rig in October which could potentially add a third drill rig to the mix and provide the opportunity to chase, in addition to the ongoing programs, high grade gold targets at Miraflores as well as the porphyry targets at Chuscal and Tesorito.

“Results from the shallow Chuscal drilling will be integrated into vector targeting of the underlying Chuscal porphyry target to enable the Fathom modelling8 to be fine-tuned,” Stirbinskis said.

Los Cerros expect to provide more detail of the Chuscal program as it develops over coming weeks.