Lithium Australia (ASX:LIT) announced on Monday that it has applied for prospective tenements with pegmatite occurrences on Kangaroo Island, which is part of South Australia and lies approximately 100 kilometres south-west of Adelaide.

Best known as a high profile tourist destination and emerging wine region, Lithium Australia noted that there is also evidence on the island of pegmatite intrusives into the Tapanappa formation of the Kanmantoo Group.

In terms of geological make up, the group’s Managing Director Adrian Griffin said, “The pegmatite is predominantly feldspar-quartz-muscovite with varying amounts of topaz tourmaline varieties elbaite, rubellite and indicolite, graphite, citrine and apatite.

Providing some degree of assurance in terms of mineral presence is a geological survey conducted by the South Australian government which identified lepidolite in the area. However, there is no record of lithium exploration being conducted.

Successful entry into South Australia would expand and diversify asset base

Griffin commented on the strategic benefits of this development saying, “Our broadened nationwide search is designed to de-risks the company’s lithium exploration portfolio by providing exposure to multiple lithium opportunities across multiple state jurisdictions”. 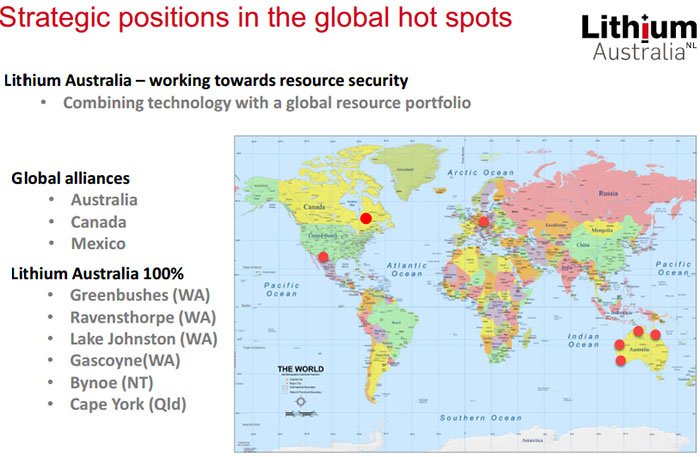 Griffin said that the area identified on Kangaroo Island aligns with the group’s strategy of targeting potential deposits that are in the right geological environment, have past identification of the lithium minerals sweet and have historic pegmatite mining.

Lithium Australia’s share price has performed strongly in January having increased more than 50% with strong momentum occurring mid-month after the company announced that it had produced battery grade lithium carbonate.

Of course it should be noted that historical data in terms of earnings performance and/or share trading patterns should not be used as the basis for an investment as they may or may not be replicated. Those considering this stock should seek independent financial advice.