Following recent upbeat news regarding the acquisition of potentially lithium bearing tenements in North America, as well as highly promising results from its lithium extraction technologies, Lithium Australia (ASX:LIT) announced on Tuesday morning that it has identified lithium pegmatites at its Lake Johnston project located 450 kilometres east of Perth in Western Australia.

In the course of reconnaissance exploration at the site, management said it had identified abundant pegmatites which emanate from nearby fertile granites and intrude the adjacent greenstone terrains along brittle failures.

The pegmatites contained lithium, rubidium and caesium with rock chip samples grading up to 3.94% lithium dioxide.

LIT’s managing Director, Adrian Griffin said there were similarities with the recently discovered Earl Grey lithium deposit (Kidman Resources – ASX: KDR). Following that discovery, KDR’s share price increased from 32 cents to hit a high of 82 cents within a month, and no doubt LIT will be hoping to achieve a similar feat.

However, prospective investors should note that historical trading patterns of LIT and/or its peers should not be used as a guide to future share price performances. Given LIT is an early stage explorer it should be viewed as a speculative investment, indicating independent professional financial advice should be sought if considering this stock.

The following map indicates the pegmatite occurrences encountered by LIT. 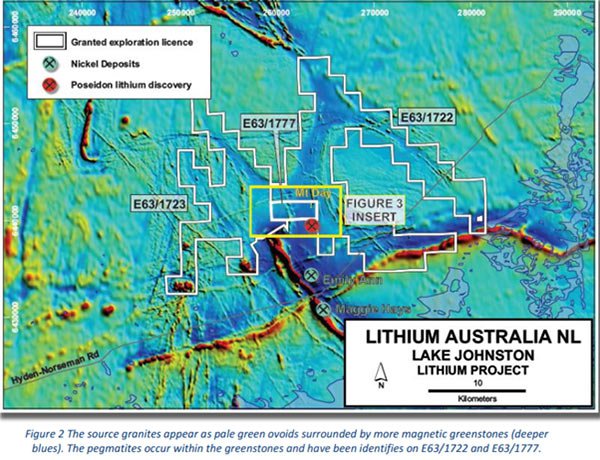 Pegmatites within and in close proximity to E63/1777 were examined by LIT. Twenty-one rock chip samples were collected and submitted for assay. While results have not yet been received, LIT said that pegmatites are lepidolite rich, but also contain a number of other lithium minerals including zinnwaldite, which in some cases contains high levels of caesium.

In summing up these exploration results, Griffin said, “Lake Johnston has the right geological environment to produce abundant lithium pegmatites given its large, fertile granites, adjacent to country rocks that have the most prospective physical characteristics for pegmatite emplacement”.

As such, he viewed today’s results as unsurprising, but very promising.