Lithium Australia gets into Telsa territory

ASX-listed junior graphite player Lithium Australia (ASX:LIT) has signed off on a deal to apply its ground-breaking lithium processing technology in an area which has caught the attention of Tesla Motors.

It has signed a memorandum of understanding with ALiX Resources, which has a lithium exploration permit in Sonora, Mexico.

The permit includes a strike extension from the Sonora Project, being developed by Rare Earth Minerals and Bacanora Minerals.

That project was at the centre of a deal signed between the parties and major lithium user Tesla Motors in August, which is building a gigafactory in Nevada to produce lithium-ion batteries for its fleet of electric cars.

It was a sign that end manufacturers of lithium-ion batteries were increasingly seeking involvement in the upstream sector, playing an active role in securing supply rather than simply waiting to buy lithium on contract or from the spot market.

ALix’s permits in the area contain a low-grade lithium resource, a resource LIT thinks it may be able to bring up to a commercial grade using its innovative L-Max technology.

It is a zero-energy footprint process for processing lithium micas, an abundant but low-grade source of lithium.

It has had recent success testing the process on a smaller scale, bringing low-grade micas up to lithium with a grade of 99.53% purity.

LIT will now aim to do the same with ALiX’s lithium deposits. 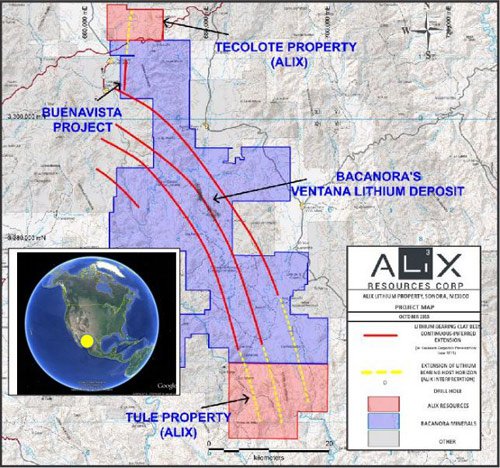 Location of the ALiX’s projects in Senora, Mexico.

The MOU has been signed and LIT told shareholders yesterday that it would seek to wrap up a definitive joint venture agreement within three months.

At this stage, samples from ALiX’s project will be brought to LIT for initial analysis, and should that hold potential LIT will produce a commercial development proposal, which will contain a roadmap for ultimate commercialisation using LIT’s methods.

Then the JV will move onto small-scale testing, and then ultimately commercial arrangements.

The terms of these potential arrangements will be written into the definitive joint venture agreement, but may be changed.

LIT managing director Adrian Griffin said the deal brings LIT into one of the hottest lithium locations in the world.

“The opportunity to evaluate ground next door to Bacanora’s Sonora Project is a major advance for Lithium Australia,” he said.

“The deposits in this region have already sparked the attention of Tesla as feed for the Gigafactory, which is close in comparison with other developed deposits.

“Providing a low-energy, cost effective alternative to less efficient processing systems may create a big advantage for these deposits.”

Griffin also flagged the possibility of a pro-rata bonus issue of shares to LIT shareholders to get the project up and running, but this has not yet been confirmed.