Lithium Australia (ASX:LIT) has continued its upstream drive – doing a deal with US Masters Holdings (ASX:USH) which sees the lithium player in the box seat at a key WA field.

The emerging lithium player told its shareholders this morning that it had managed to swing a deal with the gold and nickel explorer for lithium rights in two key tenements near Lake Johnson in WA.

While USH holds the gold and nickel rights to the tenements the deal will see it transfer lithium exploration rights to LIT in exchange for 9 million LIT shares.

In return, USH will get nickel and gold exploration rights to a tenement LIT currently has under application in the area in exchange for 3 million USH shares – when the permit is granted by the WA government. 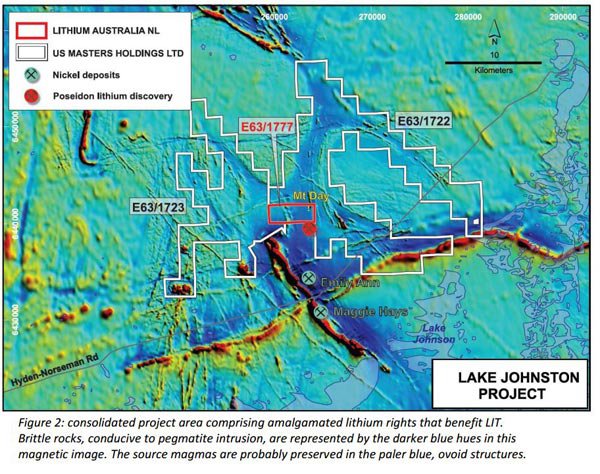 Back in May, listed exploration player Poseidon Nickel (ASX:POS) announced that sampling from lithium pegmatites close to the border of the USH permits had brought up high lithium grades.

The samples are interpreted as extending northeast into one of the USH permits.

The deal effectively gives LIT a foothold in another emerging WA lithium hotspot, and managing director Adrian Griffin said it put the company in “the box seat”.

“Lake Johnson is a significant addition to LIT’s Yilgarn asset base, and the deal with USH puts us in the box seat in the area,” he said.

“While previous exploration ignored the lithium potential of the pegmatites, recent exploration has demonstrated conclusively the prospectivity of the area.

Recently it announced plans to drill up to 35 holes in an area subject of a $700 million merger between Galaxy Resources (ASX:GXY) and General Mining Corp (ASX:GMM) – at Ravensthorpe which is south of the Lake Johnson plan.

The first drill target for LIT is just 18km away from the Mount Cattlin mine, and includes the Horseshoe prospect.

LIT has been increasingly active on the upstream side of the business – having reinforced its position in several promising areas including Mexico and Greenbushes, the latter the site of the world’s largest supply of lithium.

While LIT remains active in the upstream, it’s downstream where it hopes to truly makes its mark.

It is working to prove up its ‘Sileach’ process – a way of processing lower-grade silicate deposits normally considered sub-economic.