Two of Western Australia’s most experienced mining business identities have been appointed to Graphite Australia NL’s initial board, to drive the public float and ASX listing of this graphite explorer.

The new company will be birthed from a spin out of Lithium Australia’s (ASX:LIT) 100% owned subsidiary graphite interest in Western Australia.

The idea behind the split is to allow LIT to focus exclusively on bringing its advanced Australian and international lithium interests and exclusive lithium processing technologies to commercial markets around the world.

The new entity, Graphite Australia NL, can focus on developing the graphite prospects located in WA to service global battery markets and other demands for the resource.

The two well-known identities appointed to the board the Board of Graphite Australia as inaugural Directors are Mr Tom Revy and Mr George Bauk.

Appointed as an Executive Director, Mr Revy comes with over 30 years mining experience and has been tasked with driving the pre-listing requirements, followed by the Initial Public Offering (IPO).

The new Executive Director has worked on projects in Papua New Guinea, Australia, the Americas, Africa and China.

Mr Bauk, the current non-Executive Chairman of LIT, has over 25 years’ experience in the mining industry.

Through the float of Graphite Australia, LIT is expected to emerge as a significant shareholder and will also continue to provide both technical and administrative support to the newly listed entity.

As this is yet to occur, it is important to take a cautious approach to any investment in LIT and seek professional financial advice for further information.

LIT shareholders will be offered priority entitlement to the IPO share subscriptions in Graphite Australia when it floats.

Further details on the IPO will be announced to the market in the near future.

The graphite assets formerly held by LIT were part of the strategic plan to explore and develop the raw materials necessary to meet the growing demand for emerging battery technologies around the world.

Namely in lithium batteries, which require the two main materials in lithium and graphite.

LIT has made applications for a total of eight exploration licenses in Western Australia in five project locations covering a total area of 589km2.

All the projects are greenfield in nature and are currently awaiting exploration grants. 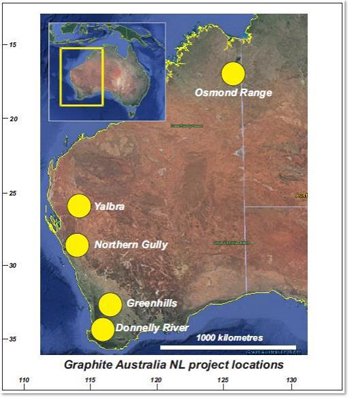 The Yalbra Project is located some 5km along strike from Buxton Resources’ JORC compliant Inferred Mineral Resource of 4Mt @ 16.2% TGC1 (total graphitic carbon). The deposit was reported by Buxton to be the highest grade JORC graphite resource in Australia. The LIT ground overlies 20km of the high grade metamorphic unit, the Warrigal Gneiss which is host to most of the graphite elsewhere at Yalbra. The unit is an immediate priority for investigation using advanced airborne electromagnetic (EM) methods.

These three ELAs are located over prospective high grade gneiss in an area where graphite mining dates back to 1904. Public domain EM surveys partially cover the tenements and indicate strong conductive responses within the LIT ground. These positive signatures may well represent graphitic horizons at depth and as such present as drill ready targets.

This is located in an area that has a long history of lead mining with lesser amounts of copper, zinc and silver exploited from around 1850. The Lady Sampson Lead mine lies within the application and exploration in 1972 reported graphite as a common accessory mineral in strained quartz reefs and brecciated pegmatites in areas adjacent to the mine. This occurrence was neglected with the focus being set solely on base metals. LIT believes Northern Gully is prospective for graphite discovery based on the favourable geological environmental and historic recorded graphite occurrences.

This covers a series of EM targets within the Ahern Formation and Helicopter Siltstone. There are no known graphite occurrences within the tenure and the closest occurrence is the Mabel Downs prospect some 25km to the west. Public domain EM surveys show a strong east-west conductor possibly related to graphite. The EM targets indicate conductivity at depth and warrant further exploration.