LIT JV strikes in the Goldfields

Lithium Australia’s (ASX:LIT) decision to tie up with Cazaly Resources has borne fruit – with the pair snagging new lithium ground right next door to a promising project.

The pair formed the Goldfields Lithium Alliance (GLiA) back in May as a way for both parties to scale up and take advantage of acreage opportunities in the region.

The alliance has made its first move, picking up over 81 sq.km in the goldfield, just 25km south of the global-scale Mount Marion Lithium project, which has a resource of 60.5 million tonnes at 1.36% lithium oxide.

Crucially, the new ground is just 2km away from a project being explored by Maximus Resources (ASX:MXR) – which recently reported rock chip samples averaging 3.55% Li2O.

GLiA is currently undertaking a desktop study of all the available data, and is also in the field to conduct initial fieldwork.

The ground itself has never been explored for lithium, despite the Geological Survey of WA finding a 1.8km stretch of exposed pegmatites. 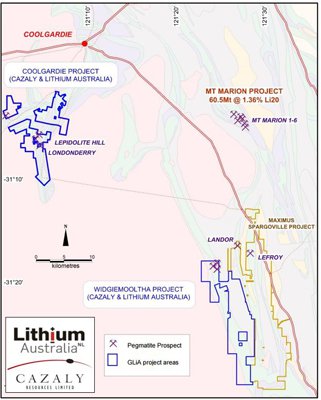 Map showing the new project picked up by the GLiA

LIT told the market today that aerial photographs also “suggests the area has potential for several other pegmatite bodies bodies not mapped to date.”

Managing director Adrian Griffin said the acquisition showed the value of the partnership with Cazaly.

“The acquisition further cements the partnership with Cazaly as it brings complementary expertise to our efforts in the Goldfields enabling greater penetration into the opportunities offered by the region,” he said.

“Furthermore, the infrastructure within the Kalgoorlie mining region will be a significant advantage to any potential development opportunities.”

LIT and Cazaly formed the joint venture back in May as a way to combine their powers in the region.

Existing and future holdings in the region will be combined to form a 50/50 alliance for a minimum of five years and Cazaly now has access to 50% of LIT’s rights to the Coolgardie Rare Metals Venture (CRMV) including Lepidolite Hill.

The CMRV is a Lithium Australia initiative with Focus Minerals Limited (ASX:FML) and includes the historic lithium production centres of the Lipodilite Hill and Tantalite Hill mines.

LIT will also grant a SileachTM license to the Alliance for application of LIT’s 100% owned processing technology, to projects within the alliance.