Lithium Australia (ASX:LIT) has fired the starting gun on its Mexican adventure, with fieldwork at Sonora to begin immediately.

It told its investors earlier today that it, in joint venture with TSX-listed Alix Resources, had started work on what it hopes will become a valuable lithium clay project.

The project is along strike from the Sonora Project, which is being developed by Rare Earth Minerals and Bacanora Minerals with an eye toward supplying lithium-ion battery giant Tesla to the north.

The deal was a sign that end-users are increasingly becoming involved in the upstream exploration game, rather than waiting for material to appear on a spot market.

If the initial analysis is right, Alix’s permits contain a low-grade lithium clay, one LIT will be hoping to bring up to grade using its Sileach process. 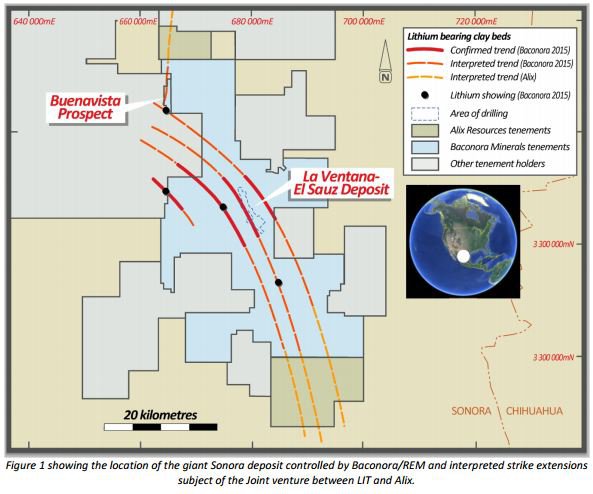 Map of LIT’s project in Mexico

The Sileach process has been touted as a way to bring low-grade micas which contain graphite, and turn them into a lithium-oxide product in line with industry specifications.

LIT has the opportunity to earn in for a 65% stake as the project progresses, and now the starter’s gun has been fired investors will be waiting for first results from the project.

At this stage the plan is for samples the project will be brought to LIT for initial analysis, and should that hold potential LIT will produce a commercial development proposal, which will contain a roadmap for ultimate commercialisation using LIT’s methods.

Then the JV will move onto small-scale testing, and then ultimately commercial arrangements.

The terms of these potential arrangements will be written into the definitive joint venture agreement, but may be changed.

LIT has been increasingly busy building its upstream position of late, most recently earning into an exploration license in the Northern Territory which the company has compared to the largest hard-rock lithium mine in the world, Greenbushes.