The independent 3-D geochemical modelling has revealed that the Guayacanes and Corporacion porphyry targets at the Chuscal prospect form part of a substantial porphyry target below and untested by recent drilling.

The 3-D model plus ongoing geological modelling will inform porphyry and epithermal drill program planning for the second half of 2020, assuming ongoing easing of COVID-19 restrictions.

The Chuscal prospect at the Quinchia Project is part of LCL’s Quinchia Gold Portfolio, along with the Andes Project, and is located within the same structural trend as the 14Moz Marmato Gold Mine and the 29Moz La Colosa gold project.

Dr Garwin has successfully used this technique previously to fine tune porphyry targets such as SolGold’s Tier One Alpala discovery in Ecuador. The technique has identified a high probability porphyry target (Fathom target) immediately below and adjacent to recent drilling. 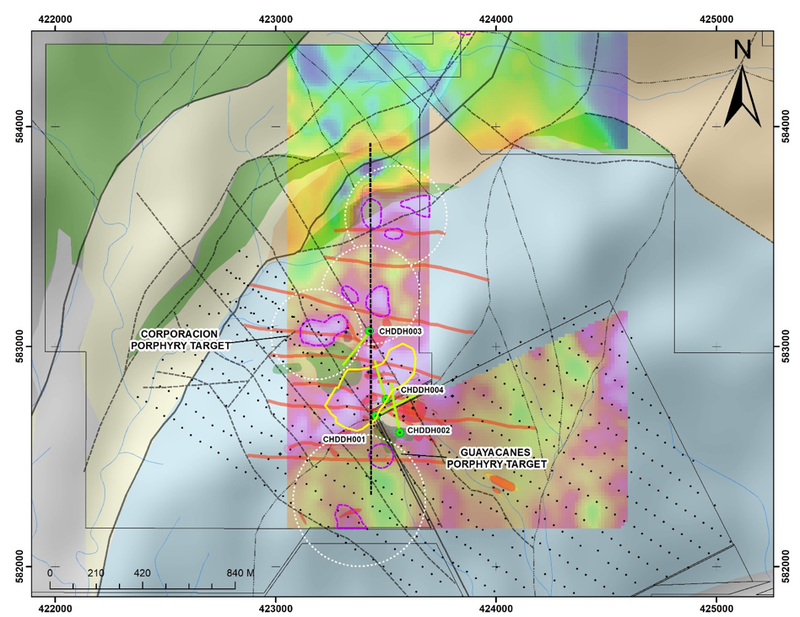 The technique compares eleven selected porphyry pathfinder elements from Chuscal surface samples and drill core assays to the distribution of the same pathfinders at the Yerington porphyry - an internationally studied Cu-Mo-Au porphyry deposit in Nevada.

Porphyry Cu-Au deposits are amongst the most studied in the world and it is now generally accepted that there is a zoned element signature common to most porphyry systems. Understanding that signature is critical in focusing drilling towards the high-grade Cu-Au core of what can be very large mineralised porphyry systems.

The Fathom simulation considers the element profile of a Chuscal data point and places that data point in the context of the vertical dispersion of the Yerington geochemical profile. Through multiple iterations of this process the modelling forms a probability ‘best fit’ that identifies how close the distribution of Chuscal geochemical results matches the Yerington model, and specifically where the porphyry core is likely to be located within the Chuscal porphyry system.

Based on probabilities, it then generates a 3-D target of where the high-grade zone of Chuscal is likely to be based on similarities with the Yerington analogue.

The exercise generated a compelling ‘high quality target’, the Fathom target, incorporating the previously identified Guayacanes and Corporacion porphyry targets, at a depth of approximately 500m, some 50-100m below the four holes drilled in the 2019 drilling program.

The ‘high probability’ Fathom target core (extrapolated from comparison to the Yerington model), lies midway between the Guayacanes and Corporacion targets and extends to the northeast of previous drilling. 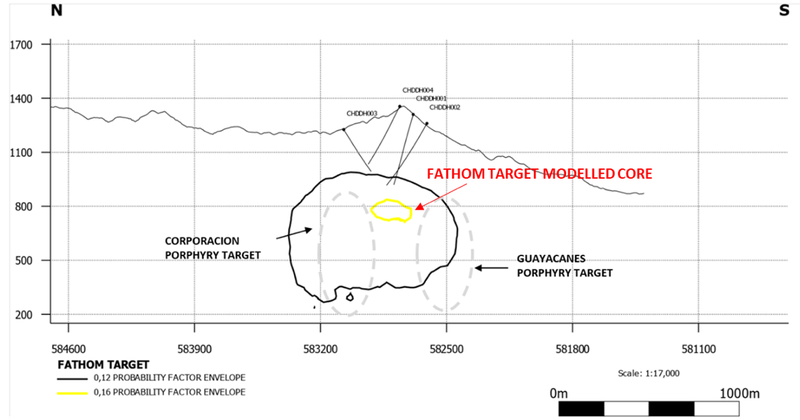 Cross section projection showing location of Fathom target in relation to the 2019 drilling program holes and the two porphyry targets established from other methods. See Figure 1 for north-south location of cross section.

Los Cerros Managing Director, Jason Stirbinskis explained “Fathom’s work is based on the provision of raw geochemical data only. It is a credit to our technical team that the Fathom work supports the existing Corporacion and Guayacanes porphyry targets generated from the entire geological and geophysical database including porphyry alteration signatures, veining styles and magnetics and adds a third target of higher probability that lies between these two targets.

“Our Colombian geological team continues to tweak both epithermal and porphyry targets ahead of our planned resumption of drilling in H2 2020.”

Today’s announcement follows news on 30 April that Los Cerros will take a 100% interest in Chuscal in a deal that saw AngloGold agreed to exchange its Chuscal JV interest for a shareholding in LCL.

Subject to a formal agreement, the deal will provide AngloGold with exposure to the broader Los Cerros portfolio via a 4.3% relevant interest in LCL and the right to increase that shareholding to 10%.

It will see Los Cerros gain a 100% interest in the Chuscal Project for a 100% holding of the entire Quinchia Project, plus the addition of AngloGold to its share registry. It also gives Los Cerros access to AngloGold’s regional IP geophysics dataset and unlimited use of its IP equipment for 1.5 years.