The Placement Shares will be issued to sophisticated and professional investors of Euroz Hartleys Ltd (Euroz Hartleys) who acted as sole Lead Manager of Placement.

Proceeds from the placement will assist in funding a maiden air core drilling of the Noombenberry Halloysite Kaolin Project near Merredin in Western Australia.

The company recently announced that drilling at one of Australia’s few known occurrences of ultra-high-grade halloysite, a naturally occurring nanotube, would start in early December.

Drilling is designed to outline the extent of a known sub-outcrop occurrence of high quality kaolinitic clays and halloysite.

Kaolinitic clays and halloysite were identified in previous sampling where results confirmed up to 38.9% kaolinite and 15% halloysite by weight in the 45 – 180um size fraction.

Another key priority is the company’s Yarara Gold Project in the Lachlan Fold Belt in New South Wales.

Complementing the Yarara Project was the recent securing of a major new project within the east Lachlan Fold Belt.

The project is 30 kilometres to the west of Orange in NSW, 30 kilometres to the north-west of the Newcrest’s (ASX:NCM) world class Cadia Gold-Copper Mine (22 million ounces gold, 4.3 million tonnes copper) and 60 kilometres west of Regis Resources’ (ASX:RRL) McPhillamys Gold Project (2 million ounces gold) which is hosted by similar geological trends, including being situated within the regional Lachlan Transverse Zone (LTZ). 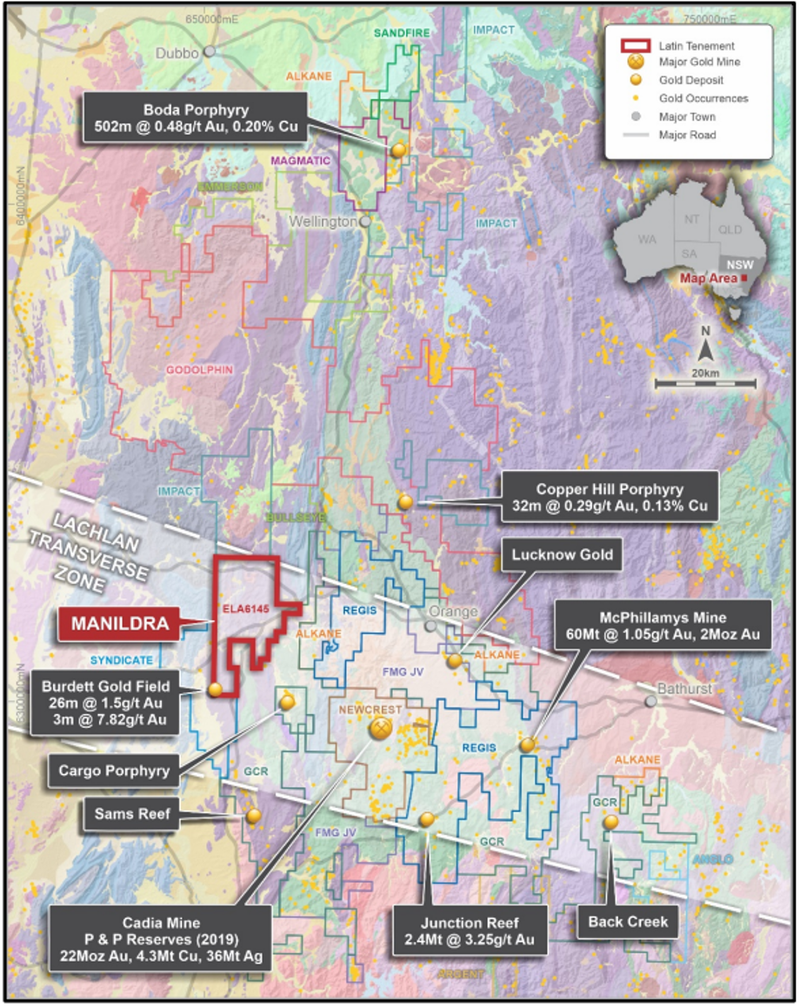 Latin Resources will also be undertaking reconnaissance mapping and sampling at the recently acquired Manildra and Burdett Projects, as well as conducting first phase of reverse circulation (RC) drilling for approximately 1000 metres at these projects.

Commenting on the capital raising and the group’s upcoming activities, director Chris Gale said, “The interest shown by Euroz Hartleys’ clients in the capital raising is a testament to the quality of Latin’s projects that are now drill-ready and positioned to move into the next phase of development.

“The company has an extensive schedule of drilling across multiple targets planned to commence in December and continue throughout 2021, starting with the immediate drilling of our very exciting Noombenberry Halloysite-Kaolin Project in WA, and we’ll then embark upon our maiden gold drilling in the world-class gold district of the Lachlan Fold in the first quarter of 2021.”