Latin Resources Limited (ASX:LRS) has released promising results from the initial batch of samples from air-core drilling at the company’s Noombenberry Project.

Importantly, these drilling results will feed into the company’s maiden resource, a potentially market moving event for Latin Resources.

The resource is due in the March quarter and it will allow the market to compare LRS’s resource against Andromeda Metals, whose results have delivered investors a more than 500% return in recent months and set the early pace for halloysite exploration.

Results from the first 100 samples submitted by LRS for test work have confirmed the project contains very high grade halloysite, with individual composite sample grades of up to 37% halloysite contained within the bright white (>75 ISO-B) to ultra-bright white (>84 IOS-B) kaolinite at Noombenberry.

Intersections of kaolinised granite in the 14 holes for which results have been received to date average 13 metres, up to a maximum of 32 metres thickness, while the average depth to the top of the kaolinite zone in these holes is just 8 metres below surface.

This is an important factor in terms of the economic viability of extracting resources as near surface mining is much cheaper than large open pit or underground mining.

As indicated below, this first batch of results represents more than 15% of the total number of holes drilled, but these initial results are extremely encouraging which enables the company to move forward to undertake its maiden JORC resource on the project. 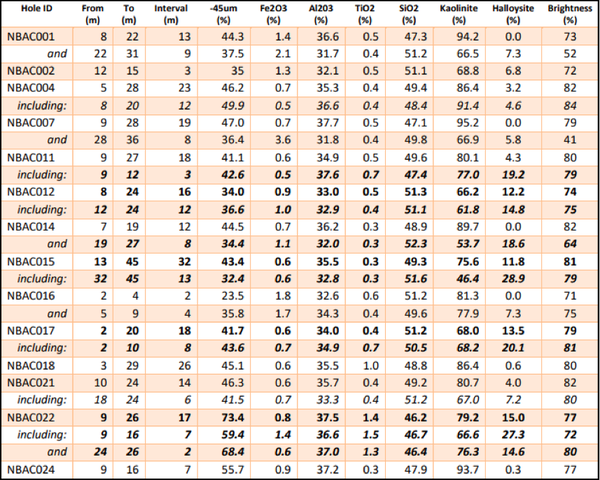 Commenting on these developments and the implications for the group’s goal of expediting a maiden resource estimate, executive director Chris Gale said, “We are extremely pleased with these initial results from test work from the Noombenberry project, which confirm the presence of very high grade halloysite contained within the bright-white kaolinitic clays.

"While these results are from just a small portion of the drilling completed at Noombenberry, our logging suggests that we have intersected similar kaolinised granite across the 18 square kilometres tested by the full program, and we are yet to have results back from the area where we have logged our thickest kaolin intersections which were up to 50 metres.

"Having engaged our independent resource consultants, Latin's team is now working on building the geological models for the company’s maiden resource estimate.

"This is an extremely exciting time for the company, as we believe that the Noombenberry Project has the potential to unlock significant value for Latin shareholders due to the sheer scale and quality of the material discovered by our team.”

The nature of kaolinite and halloysite mineralisation, being very similar minerals means that very detailed and time-consuming test work is required to gain accurate and reliable results.

Latin has been working closely with the various groups undertaking the test work of the Noombenberry samples, including Bureau Veritas Laboratories, CSIRO, and the University of South Australia to streamline this process and enable a steady throughput of samples.

The result of this collaboration is that Latin now expects to receive regular results consistently from all groups on a weekly basis.

Latin Resources plans to re-commence drilling once all statutory approvals have been received to extend the current drill coverage into its adjacent 100% owned tenement (E77/2624).

Importantly, initial results from this area as shown below demonstrate the bright-white kaolin and high grade halloysite mineralisation is open to the north. 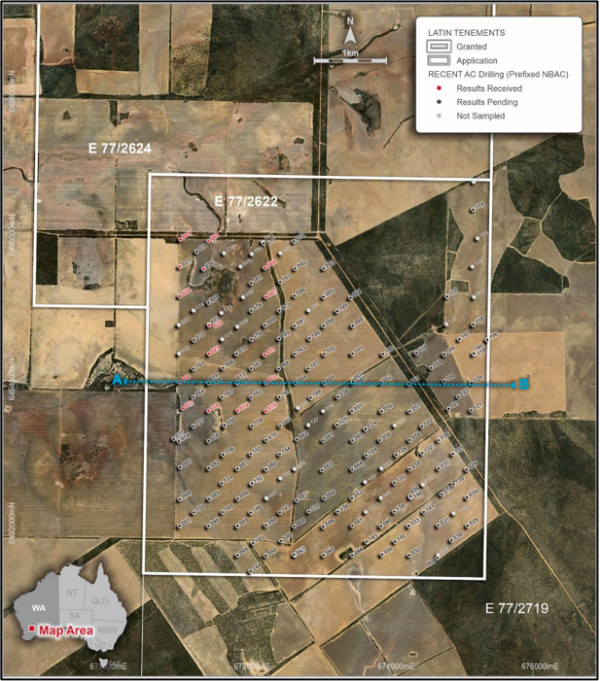 Logging of the aircore samples from all the holes across the very large 18 square kilometre area tested at Noombenberry has shown the development of a thick consistent blanket of kaolinized granite.

With these initial results confirming the bright white nature of the kaolinite material, and halloysite development in a high proportion of the holes where results have been received, the company is very confident about the potential of this emerging discovery.

Latin’s geological team is working closely with the consultant group, with geological domaining and the construction of wireframe model underway.

This precursor work will enable the fast tracking of the estimation process once all test work results have been received, highlighting the group’s near term catalysts in 2021.