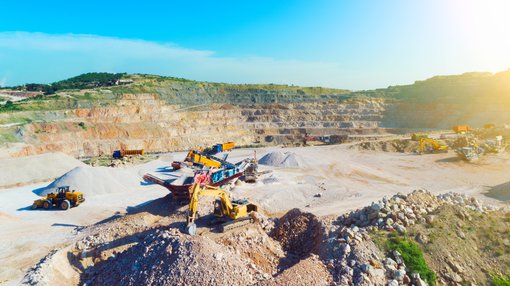 Latin Resources Limited (ASX:LRS) has released its annual report the year ended 31 December 2020, announcing that the company is debt free and in a very healthy financial position as it looks forward to progressing its projects in 2021 to the next level of development.

The highlights are outlined below:

Latin Resources’ principal activities during the year were the exploration and evaluation of mining projects in Australia, Peru, Argentina and Brazil.

Australian projects include the Yarara gold project in the NSW Lachlan Fold belt, Noombenberry Halloysite Project near Merredin, WA, and the Big Grey Project in the Paterson region, WA.

Additionally, during the year, LRS signed a joint venture agreement with the Argentinian company Integra Capital to fund the next phase of exploration on its lithium pegmatite projects in Catamarca, Argentina.

Some of the major developments in these projects are explained below.

As we reported in December 2020, LRS begun its maiden first pass and infill air-core drilling at the project, which the company advised had been completed in January 2021.

The company completed 197 drill holes to test the extent of a known Kaolinite-Halloysite occurrence.

Logging of air-core drill cuttings confirmed significant intersections of bright white kaolinite across the area tested, with a maximum logged down hole intersection of 50m. This sequence of well-developed kaolinitic clay (saprolite) beneath a thin layer of soil cover is consistent across the area tested, as demonstrated in a simplified geological cross section 6,494,000mN which cuts through the center of area of drilling. 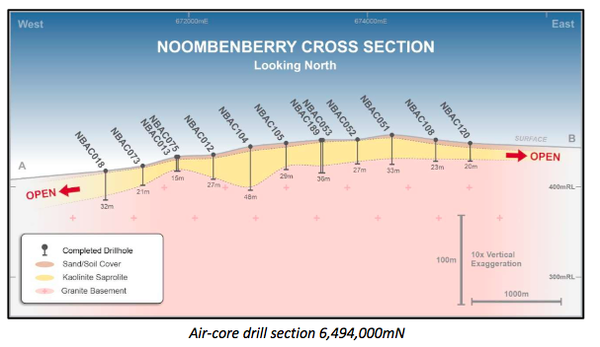 While not all results have been returned from the laboratory, the results received to date have confirmed that the Noombenberry project contains ultra-bright white Kaolinite (>80 ISO-B Brightness), and high grade halloysite with the highest individual result returned to date of 37% halloysite3.

In June 2020, Latin announced it had signed a binding farm-in terms sheet with Mining and Energy Group Pty Ltd to earn up to a 75% interest in a gold project, Yarara, within the highly prospective Lachlan Fold gold belt of NSW. 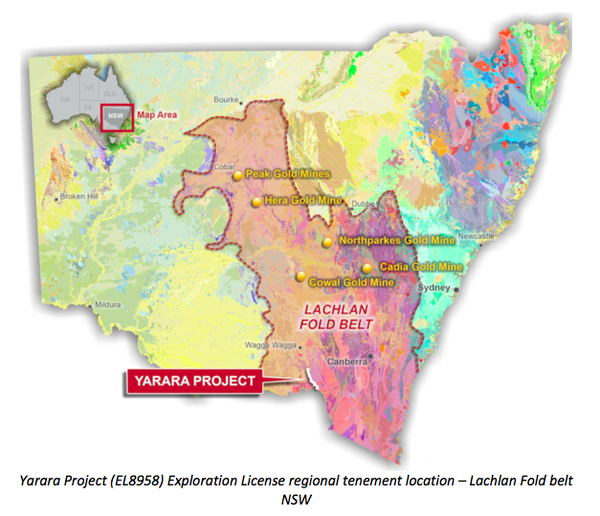 The project area contains numerous old gold workings with at least four main historic high-grade gold mines that targeted high-grade quartz vein systems, including the Billabong Mine, Rangatira Mine, Perseverance Mine and Just-in-Time Mine. An initial structural interpretation based on the available regional datasets highlighted well over 30 target areas, including numerous priority areas, which Latin believes are highly prospective for a range of gold mineralisation styles.

During the December 2020 quarter, Latin continued its efforts to secure land access in priority target areas of the Yarara Project (EL8958), allowing the Company to plan on-ground reconnaissance mapping and prospecting for early January 2021.

The Company is expanding its NSW-based exploration team, including the recruitment of a Senior Geologist to be based in Orange, who will drive on-ground exploration efforts across the Yarara and Manildra Projects.

Latin secured a major new project in November 2020, within the east Lachlan Fold Belt of NSW, through the successful submission of a new tenement application, ELA6145.

Following the granting of the new tenement and securing land access and other statutory approvals, Latin proposes to complete regional and project scale first pass targeting exploration, which may include geophysical surveys and low-impact geochemical sampling, followed by RC drilling of any defined targets. 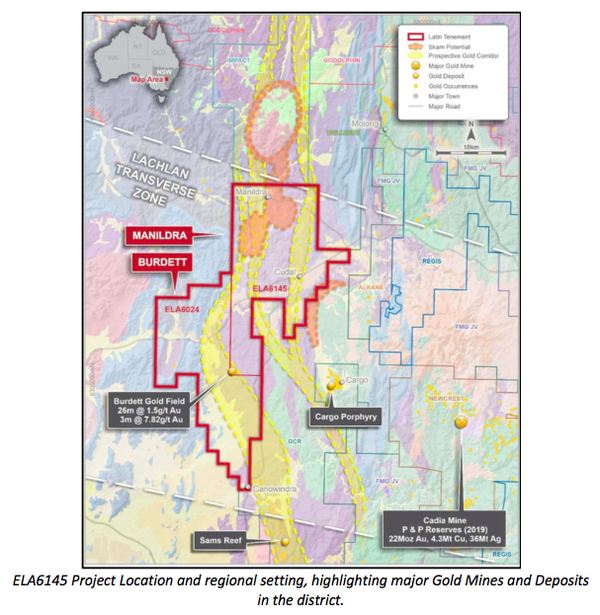 LRS will undertake detailed prospect scale mapping and rock-chip sampling of the area to better understand the controls to mineralisation before undertaking further drill testing.