LRS has subscribed for 2,700,000 shares (CAD540,000) in a Private Placement to be completed by the TSX Venture Exchange listed Westminster.

Once the placement closes, LRS will have a 24% holding.

Funds from the placement will be used to further develop Westminster’s copper project portfolio in Latin America including the newly acquired Mostazal Copper project, its copper projects in Peru acquired from Latin Resources, and for general corporate and working capital purposes.

The project has known copper mineralization that occurs in a series of stacked stratified lenses measuring 2.5km long by 2km wide and 300m deep.

Reported historical production of 120,000 tons has been processed with an average grade of 1.8% Cu1.

“We congratulate Westminster team on the successful placement to fund the development of the exciting Mostazal Copper project in one of the world’s premier Copper districts,” Latin Resources’ Executive Director, Chris Gale said.

“Latin Resources are strongly supportive of the well-structured and well-timed acquisition Westminster has made of the Mostazal Copper Project in Chile, with the outlook for copper being so robust. We look forward to seeing the WMR team advance the project where they can now commence exploration, targeting a large-scale copper porphyry system, underlying the already delineated higher grade copper mineralisation at surface”.

The Mostazal copper Project is located in the Atacama Desert of Chile, 80 km northeast of Copiapo, 30 km east of Inca de Oro. The property consists of eight exploitation licenses covering approximately 16 square kms within the main porphyry copper belt of Chile, along the Domeyko Fault System. 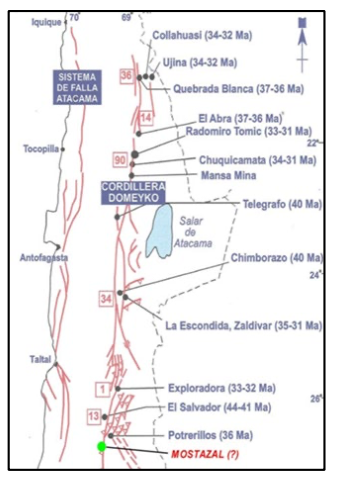 The Domeyko Fault - Northern Chile is among the most productive copper regions in the world, hosting a significant number of copper porphyry deposits. The Domeyko Fault System is a 500-kilometre corridor, intersected by cross-cutting structures at Mostazal, with significant copper mineralisation exposed at surface, and drilled to a shallow depth.

Westminster has interpreted a porphyry copper deposit beneath the existing mineralisation and geochemical/geophysical anomalies due to:

Westminster is in the process of reviewing data from a 2012 – 2013 exploration program conducted by a prior operator at Mostazal.

“Mineralization at surface bears all the hallmarks of an extension to a buried porphyry copper system, including tell-tale alteration halo, and the suite of copper sulphides and associated pathfinder elements you’d expect to see,” Jason Cubitt, Westminster’s President and CEO said.

“It’s highly encouraging to see the geophysical modelling of structures of significant size at depth lying beneath known copper mineralization at surface.”