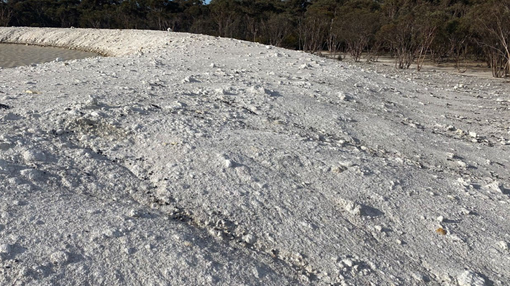 In a development that could lead to a significant share price rerating based on peer comparisons, Latin Resources Limited (ASX:LRS) has finalised the Maiden Inferred Mineral Resource for the 100% owned Noombenberry Halloysite-Kaolin Project where the company has named its first deposit the Cloud Nine Deposit.

A global Inferred Mineral Resource estimate for the Cloud Nine Deposit of 207 million tonnes of kaolinised granite has been reported by RSC, using an ISO Brightness (“ISO-B”) R457 cut-off of 75.

As indicated below, the Could Nine deposit is located on the company’s 100% owned exploration licence E70/2622, which is situated approximately 350 kilometres to the east of Perth and to the south-east of the town of Merredin. 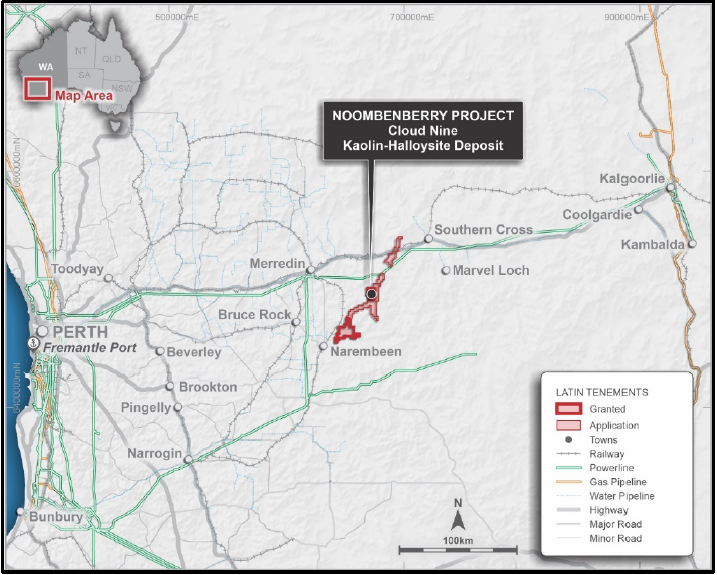 Both of these are considered high quality product specifications, potentially suitable for a wide range of industrial applications.

Within only 18 months of identifying the opportunity for halloysite, Latin Resources has been able to rapidly define this maiden MRE because of the very shallow nature of the resources (average of less than 4 metres from the surface.

Importantly, exploration has demonstrated that the resource has substantial potential to grow, being open in all directions.

Management intends to expedite the next round of drilling to elevate some of the Resources to the Indicated or Measured classification for the purposes of a PFS, which can all be funded with existing cash of more than $4 million at end of March 2021.

While quality halloysite deposits are less than abundant in Australia, Cloud Nine compares well with its peers where the material often needs to be accessed at greater depths and is spread across broader deposits.

One of the most notable points of comparison in this regard is Andromeda Metals (ASX: ADN) which has a market capitalisation of about $475 million, representing a significant premium to Latin Resources, capped at approximately $95 million.

There is little variation between the sizes of the group’s resources, but the Noombenberry Project offers a combination of benefits that in the main have the potential to lead to cheaper production.

It is worth noting that Andromeda has between 7 metres and 62 metres of overlying hard silcrete caprock, compared with Noombenberry’s unconsolidated soil cover of less than 4 metres.

Consequently, LRS would appear to offer lower mining costs with a lower strip ratio as ADN has significant overburden to remove before the ore can be accessed, ordinarily translating to higher mining costs.

On the other hand, LRS can employ simple, fast, low cost exploration due to minimal cover, while also not having outcrop and thick hard caprock cove, making drilling more costly and time-consuming as the only exploration method.

The project’s proximity to a mining service centre in Kalgoorlie also compares well with the ADN project location, as it is remote and distal from existing infrastructure.

Investors in Latin Resources should be buoyed by today’s news as it may trigger a bridging of the valuation gap between it and Andromeda Metals.

Addressing the issue of valuation, executive director Chris Gale said, ‘’This massive result adds enormous value to LRS and will elevate the company to a new level.

"We will now look to fast track the deposit through to development as quickly as possible to take advantage of the buoyant mineral prices.

"I would also like to extend my sincere thanks to the landowners in Merredin for being so accommodating during the exploration and drilling process."

Benefits of easily accessible resource will be evidenced in PFS

There appears to a reasonable degree of confidence regarding the potential for resource expansion beyond the current parameters as the deposit is open in all directions with areas to the north looking particularly promising.

Resource numbers have been smoothed due to the large block size used (limited by the current drill spacing) and Inferred classification.

Management will immediately commence technical studies to feed into a Pre-Feasibility Study (PFS), along with its next round of drilling to commence in July 2021.

This is aimed at extending the Resource to the north and increasing the confidence of the MRE to a JORC Indicated and Measured classification.

The PFS will consider supply to a range of traditional end-users of kaolin-halloysite, as well as investigating the potential for downstream marketing of the high-grade halloysite to emerging new applications, including the carbon-capture and hydrogen storage markets.

This would see Latin Resources join a host of other companies that have recently flagged their intention to assess green options in terms of project development, making them very attractive to investors focused on companies that are cognisant of environmental and social (ESG) ramifications.