There has been strong news flow from the group over the last week, and no doubt the rebound in the gold price overnight contributed to positive investor sentiment.

Having hit 5.7 cents, the company went close to matching the previous high of 5.8 cents that was recorded in December 2017.

However, it is more about the underlying news flow that is of most importance because the company is making a foray into one of the premier gold-copper porphyry regions in Australia.

Krakatoa’s Belgravia Project covers an area of 80 square kilometres in the central part of the Molong Volcanic Belt (MVB), part of the Lachlan Fold Belt in New South Wales which is so far host to more than 80 million ounces of gold and 13 million tonnes of copper.

Newcrest Mining (ASX:NCM) has a prominent position in the region through its low-cost, long life gold-copper Cadia East Project which lies to the south of the Belgravia Project.

There has also been a recent discovery to the north of Krakatoa’s tenements made by Alkane Resources Ltd (ASX:ALK).

The MVB is predominantly a north-south trending system of gold rich porphyry mineralisation.

Promising news emerged on Friday when management announced that it had been granted the Turon Project (EL8942) following a direct licence application (ELA5882) in late November 2019.

The Turon Project covers an area of 120 square kilometres and is situated approximately 50 kilometres east of the company’s Belgravia Project, where it has commenced the maiden drill program. 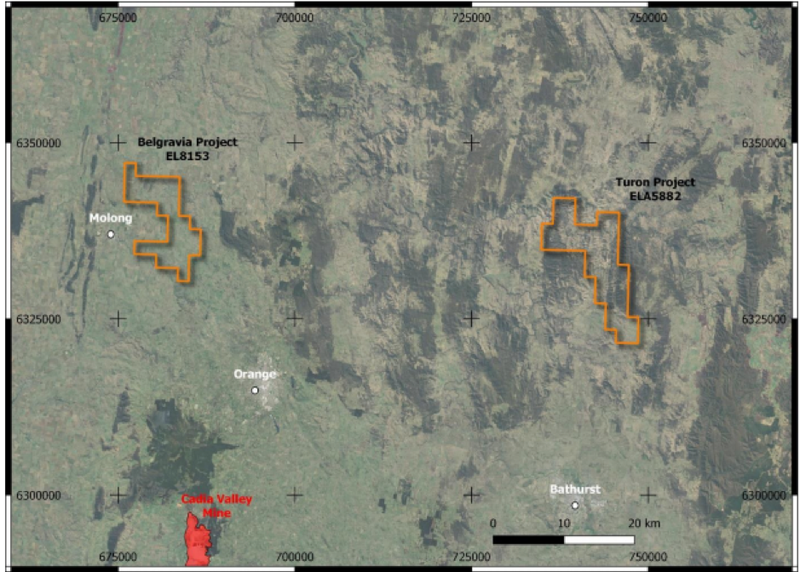 The Turon Project lies within the eastern Hill End Trough, where a number of mineral deposit styles are present.

From a geological perspective, these include orogenic gold (and base metal) vein systems, as well as strata-bound base metal sulphide mineralisation.

Management’s initial focus will be on the Quartz Ridge and Turondale prospect areas where a system of quartz reefs can be traced over 1.4 kilometres and 2.4 kilometres respectively.

A number of outstanding gold results from rock chips have been historically returned from this area.

The best of these were at Dead Horse Reef where results included 1530 g/t gold and 150 g/t gold.

The Britannia mine also yielded some strong results including 60.6 g/t gold.

When the drill bits start turning in this area there will no doubt be plenty of attention surrounding upcoming results.

However in the near term, the much anticipated drilling program has just started at the Belgravia Project.

The program will comprise 127 aircore holes over three prospects being, Bella, Lara 1 and Lara 2.

These are part of the Copper Hill and Larras Lee Igneous Complexes, and the former is host to the Copper Hill copper-gold deposit which lies 2.7 kilometres immediately south-west of the drilling site and is the subject of a prefeasibility study.