Krakatoa shares rally on back of survey data

This is situated in the central part of the Molong Volcanic Belt, Lachlan Fold Belt in New South Wales, a highly prospective region for gold-copper porphyry mineralisation.

The survey was conducted at elevations ranging between 30 metres and 40 metres on 50-metre east-west line spacing.

The airborne geophysical survey has enhanced Krakatoa’s understanding of the mineral prospectivity at Bell Valley and in other parts of the company’s holding, essentially making it a value add exercise.

Management recognises the significant gold-copper porphyry potential in the Bell Valley target which lies in the eastern portion of the Copper Hill Intrusive Complex.

The Complex is host to the Copper Hill deposit containing a global resource of 890,000 ounces gold and 310,000 tonnes copper.

Magnetic imaging as shown below illustrates the critical relationship between the location of mineralisation and the low magnetic signatures outlined in orange. 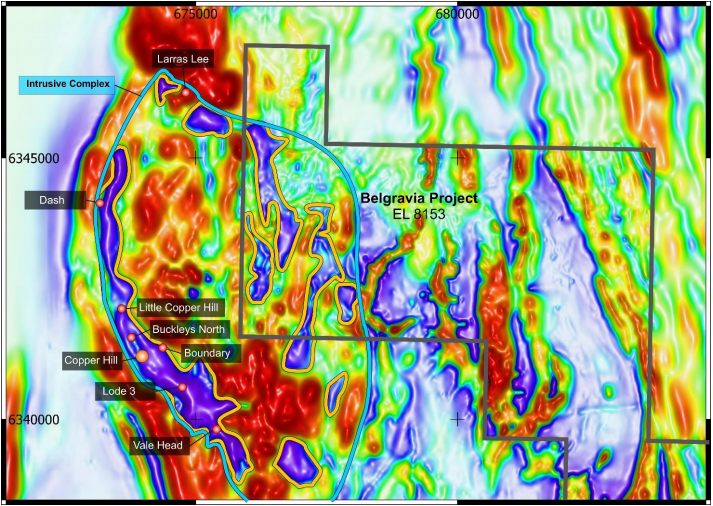 The Copper Hill deposit has been the focus for historical exploration plausibly at the expense of several underexplored opportunities.

From a geological perspective, the low magnetic features, at least locally, can result from the destruction of magnetite by propylitic and phyllitic alteration, producing a smooth broad magnetic low over the vicinity of the intrusion.

The imaging also demonstrates the importance that the margins of the major intrusive complexes have on locating porphyry mineralisation, with Copper Hill situated along the western margin and Bell Valley Target Area along the eastern margin.

Consequently, Krakatoa is eager to explore the possibilities presented by having approximately 6 kilometres of the “magnetic low signature” interpreted to lie along the eastern margin of the intrusive complex in its Bell Valley Target Area.

It is worth noting that geochemical trends and anomalism outlined by the recent aircore drilling program coincide with the northern-most magnetic low at Bell Valley.