The drilling program comprised 128 inclined holes for a total of 2,358 metres at an average depth of 18 metres.

Drilling was to blade refusal, providing management with an understanding of mineralisation close to surface.

The drilling was fairly broadly spaced at 100 metres along lines with 200 metre spacing between lines.

The objective was to test below tertiary basalt and locate patterns of zoned alteration and mineralisation halos related to large porphyry-style gold and copper systems in magnetically complex zones of the LFB, similar to that found at Cadia where Newcrest Mining (ASX: NCM) has one of the largest producing lowest cost gold-copper mines. 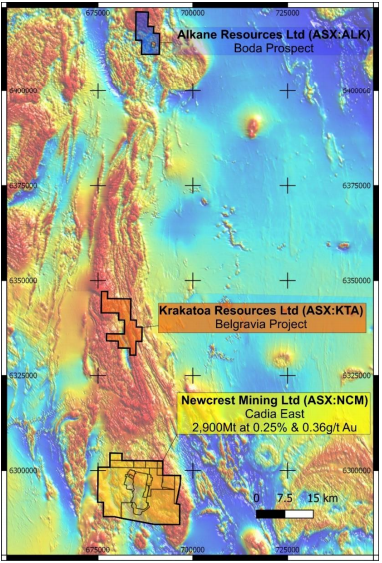 Experienced porphyry geologist Mr Ian Cooper who has had on the ground experience at Cadia summed up the findings in saying, “The drill program went better than expected with previously hidden zones of monzodiorite and shoshonitic volcanics encountered and a geochemical halo identified at the Bella Target co-incident with anomalous gold and the previously defined geophysical signature.

‘’These features are encouraging and give us confidence for our on-going exploration.”

Gold and multi-element assay results and geological logs from the aircore drilling program have been assessed and interpreted to have further heightened the prospectivity of the Bell Valley target area.

Zones of enrichment in elements typically useful for evaluating porphyry prospectivity, including gold, copper, bismuth, lead, zinc, arsenic and molybdenum were located near the diorite/monzodiorite intrusions and co-incident with previously identified geophysical targets – Bella, Lara 1 and 2 and Power.

In this context, the company is confident the assay results and geological findings from the aircore drilling program at Bell Valley have confirmed its prospectivity warranting immediate additional work.

This will include continued expansion of work to other prospective target areas, including Sugarloaf Creek and Guanna Hill.