Koppar has commenced a confirmatory brine re-sampling programme from well-head sites within the brine field, with a view to establishing a maiden JORC resource.

The results of this program are expected within the coming weeks.

The company intends to convert some of the Exploration Target to a maiden Mineral Resource Estimate as soon as possible, by generating new geochemical data and evaluation of existing seismic and well data.

Work has commenced to achieve this goal.

The company has also commenced a scoping study at the Vulcan Zero Carbon LithiumTM Project, and during the September quarter it appointed Hatch Ltd. as process engineering lead.

In line with its strategy of developing its European projects, management is also evaluating a potential dual listing on a European exchange.

It could be argued that this would be a very beneficial initiative given capital markets in the Northern Hemisphere regions tend to have a good understanding of new age metals, as well as being in close proximity to Koppar’s project based in Germany.

As well as being in a stable jurisdiction located in close proximity to relevant industrial markets, Koppar’s goal of becoming Europe’s and the world’s first zero carbon lithium producer is likely to attract plenty of attention.

In recent years, investors have demonstrated their thirst for companies with exposure to new age battery/power storage materials, flocking to lithium, cobalt and vanadium stocks to name a few.

Consequently, if Koppar is onto the next big thing in that space it may be well supported.

The following is a schematic of what Koppar’s zero carbon lithium project would entail. 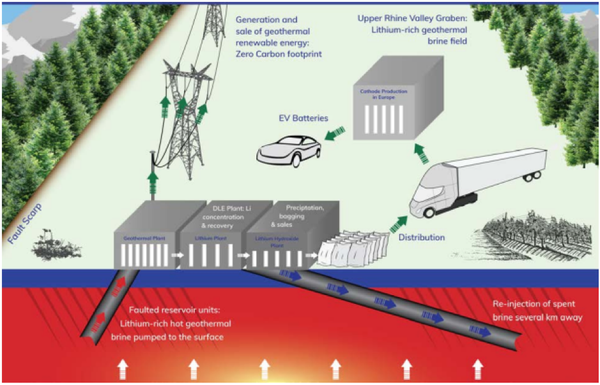 The Vulcan Zero Carbon LithiumTM Project is strategically located within a region well-serviced by local industrial activity, at the heart of the European auto and lithium-ion battery manufacturing industry, just 60 kilometres from Stuttgart.

The burgeoning European battery manufacturing industry is forecast to be the world’s second largest market for such a product.

There is the scope for Koppar to experience exponential growth as there is zero domestic supply of battery grade lithium products, providing the company with a first mover advantage.

The company recently commenced a scoping study at the project and is targeting a maiden JORC resource by year-end, indicating there potentially are near term share price catalysts.

Management noted that there is an unprecedented ramping up of lithium-ion and associated cathode production in Europe.

The company pointed to forecasts showing that the European Union (EU) is set to require the equivalent of the entire current global battery quality lithium demand by the mid-2020s, with 2023 being the main inflection point.