This triggered intense interest in the stock on Wednesday with the company’s shares surging more than 20% under the highest daily volumes recorded in the last 12 months.

The discovery was made during the ongoing exploration program within the Quartz Mountain region, which is aimed at delineating high-grade surface mineralisation with the potential to contribute early ounces to the company’s mining studies.

Diamond drill-hole GDD044 is located along strike to the south-east of the current 220,000 ounce Ewatinona Resource.

Placer historically mined gold and silver from the Ewatinona, Kobel and Maika pits, producing a combined 147,000 ounces at 1.8 g/t gold.

The location of GDD044 is designated by the “recent diamond drillhole’’ symbol below. 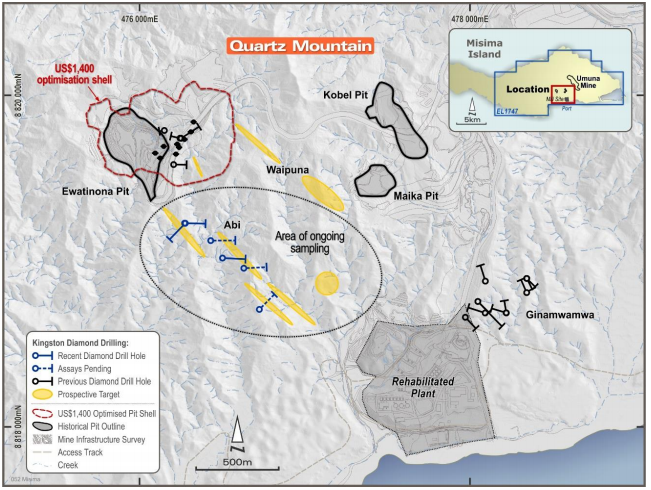 Underlining the importance of this development in terms of growing the group’s resource expansion and the prospect of moving to early stage production, managing director, Andrew Corbett said, “This is a significant development for our ongoing exploration program in the Quartz Mountain region where we are specifically targeting additional zones of Ewatinona-style mineralisation that could increase the existing Resource and provide easily accessible, low-cost ounces in the early stages of a future mining operation at Misima.

“The pedigree of this area is highlighted by the successful open pits mined by Placer at Ewatinona, Kobel and Maika. A combination of diamond drilling and surface exploration has now confirmed the location and tenor of mineralisation at Abi, demonstrating strong upside potential to the existing Resource.’’

While this is extremely promising news for the group, the company is awaiting results from samples submitted for analysis in relation to adjacent drill holes GDD045 to GDD047, inclusive.

Consequently, there is the prospect of further strong near-term news flow, and perhaps positive sentiment regarding upcoming developments accounts for the high volume buying that occurred on Wednesday.

Interestingly, the share price has broken through 2.0 cents, a level that it has tested many times without penetrating in the last 12 months.

If technical selling from chart watchers has been keeping a lid on the share price, this break above 2.0 cents could be the start of a much stronger run.

It also appears that a break above 2.5 cents could be significant in terms of recapturing the heady levels that the company traded at in early 2017.

Kingston appears to be a better investment proposition today than it was in 2017 when trading at double the current levels.

Today, it not only boasts a large 2.8 million ounce gold resource with the likelihood of near-term expansion, but the prospect of the project being brought into production at an early stage is looking more and more likely, particularly given the strong gold price.

Step back three years and the gold price was more than US$300 per ounce lower than it is today, indicating the much improved metrics that could support a decision to mine.

Plus the company looks even more attractive today given the fact that it has delineated high-grade mineralisation in areas adjacent to what would be a starter pit.

With significant upcoming news on the horizon, there certainly appear to be numerous operational catalysts in terms of maintaining share price momentum.

The initial round of drilling on targets within the Quartz Mountain is now complete and the diamond drill rig is currently drilling near-surface oxide targets at Umuna East Side before moving to Misima North. 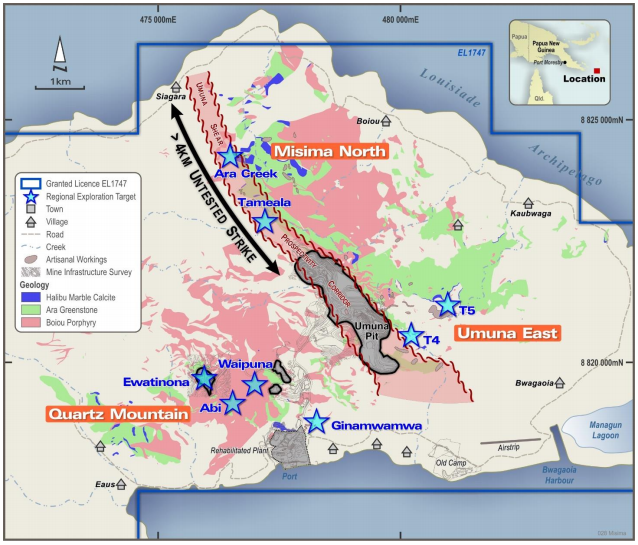 Following interpretation of the latest Abi results, management expects to mobilise a rig back to Quartz Mountain to conduct additional in-fill and extension drilling to underpin an updated Mineral Resource estimate.

An updated mineral resource estimate would definitely be a catalyst, and on this note Corbett said, “With a second diamond rig expected to start operating next month, we may have the opportunity to accelerate this drilling program, providing shareholders with a strong flow of news from Misima in the months ahead.”