Kingston Resources Limited (ASX:KSN) has had further success at its 2.8Moz Misima Gold Project in PNG.

Highlights from the initial assays received from Umuna East include:

The results confirm the presence of significant gold mineralisation close to surface and continuing at depth at Umuna East, located just 500m east of the historical Umuna pit and within the existing Inferred Resource and follow on from early excellent results at Misima North. 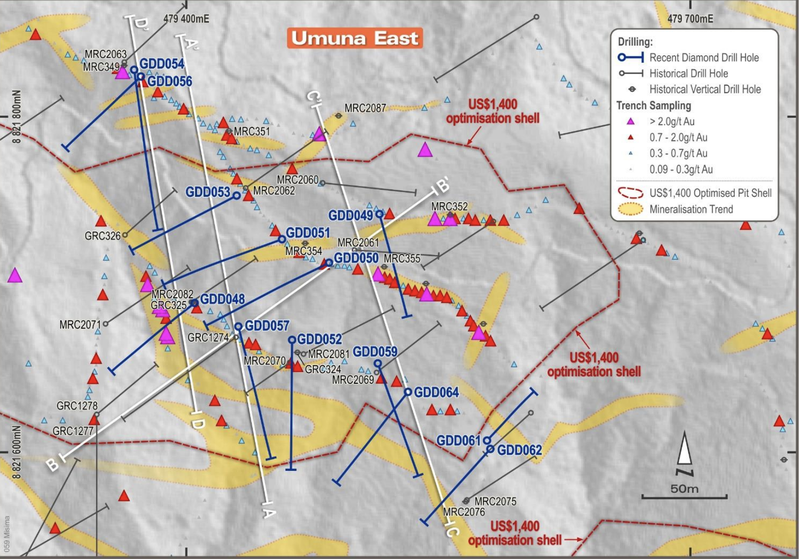 "This is another important step towards our objective of delineating multiple areas of shallow mineralisation which can underpin potential starter pits at Misima,” said Managing Director, Andrew Corbett.

“Coming on the back of the great results delivered recently at both Quartz Mountain and Misima North, Umuna East is now also showing excellent potential to host the shallow, low strip mineralisation that our exploration strategy is focused on delivering.

“It is a credit to the Kingston exploration team that we now have three areas each with strong potential to provide early mill feed as part of our Misima development strategy. The exploration success in each of these areas also demonstrates the under-explored nature of Misima Island despite the extensive mining history and large-scale resource we already have in place.

“Looking ahead, drilling activity is now focused on the Stage 2 drilling program back in the Quartz Mountain area, in particular Ewatinona and Abi as we look to upgrade and potentially expand the Inferred Resource in that area. Following that program, we then plan to return to Misima North and Umuna East for Stage 2 drilling.”

Today’s results confirm the existing mineralisation within the Resource and are expected to contribute towards upgrading and potentially expanding the Resource in the Umuna East area.

The results are consistent with Kingston’s strategy of delineating near-surface mineralisation for potential starter pits which would materially enhance the economics of accessing the main Umuna Resource.

Kingston will now turn its attention to drilling the Ewatinona and Abi prospects within the Quartz Mountain area.

Drilling is expected to contribute to a potential upgrade and possible expansion of the existing 220koz Inferred Resource at Ewatinona.

Following this program, Kingston anticipates a follow-up drilling program will be undertaken at both Misima North and Umuna East.