Kingston Resources Limited (ASX:KSN) has taken an important step towards its objective of becoming a significant new low-cost, long life, mid-tier gold producer in the Asia-Pacific region with the completion of a positive Pre-Feasibility Study (PFS) for its flagship 100%-owned Misima Gold Project in Papua New Guinea.

The PFS is based on the redevelopment of the brownfields site of the former Misima Gold Mine, which was operated previously as a successful 5.5 million tonnes per annum (Mtpa) Carbon-in-Leach (CIL) open pit operation by Placer Pacific, producing 230,000 ounces per annum over a 15-year production history. 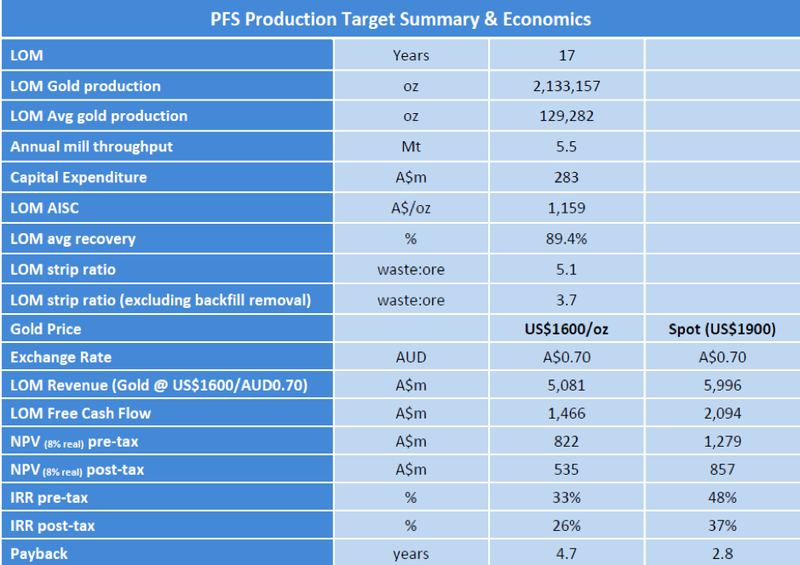 Kingston plans to leverage off this strong production history and construct a new 5.5Mtpa CIL treatment facility and modern infrastructure on the footprint of the historic mine.

This will involve establishing a new standalone, long-life gold mining and processing operation underpinned by two ore sources as shown below, a cut-back of the existing Umuna open pit and an expansion of the existing small pit at Ewatinona in the Quartz Mountain area. 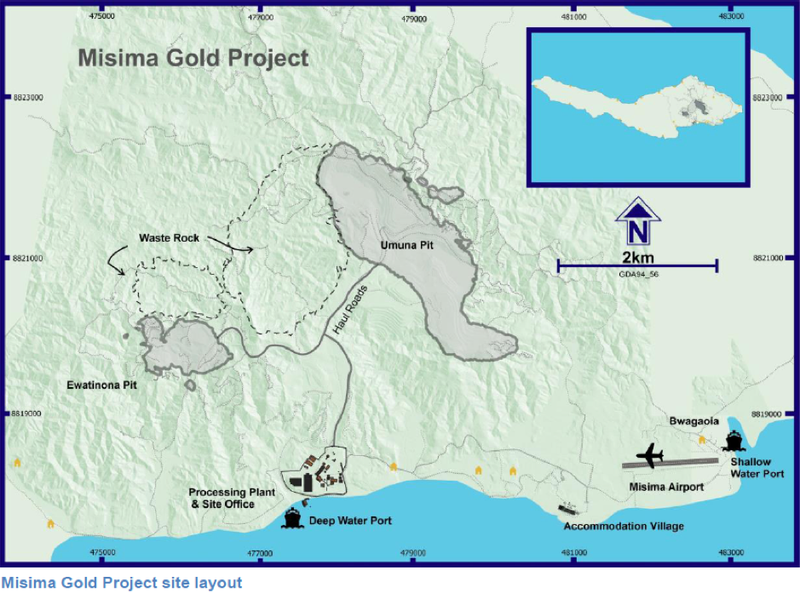 Together with the PFS, Kingston has released a maiden JORC Probable Ore Reserve of 48.3 million tonnes (Mt) at 0.9g/t for 1.35 million ounces which underpins the large scale, long-life Misima Gold Project, together with a further 12.5% increase in the global Resource to 144Mt at 0.78 g/t for 3.6 million ounces.

The Ore Reserve is based on a standalone mine plan and financial model excluding Inferred Resources.

The PFS is based on a production target mine plan and financial model including Inferred Resources which demonstrates the potential for the project to grow beyond the Ore Reserve if further work can upgrade confidence in the Inferred Resources to at least Indicated status.

The scale and quality of the Mineral Resource and Ore Reserve, together with the brownfields nature of the Misima Project, the extensive mining and processing history, the relative softness of the ore and simplicity of the process flowsheet all give Kingston a high degree of confidence in the technical and commercial viability of the project as the foundation for a long-term Asia-Pacific gold operation.

Commenting on these developments, managing director, Andrew Corbett said, “We are extremely excited to be able to report such strong results from the PFS, together with an impressive maiden 1.35Moz Ore Reserve and a further increase in our global Mineral Resource to 3.6Moz.

“This is a significant milestone for all stakeholders in the Misima Gold Project, and represents a meaningful step towards our goal of becoming a substantial new mid-tier Asia-Pacific gold producer.

Strong margins at AISC of A$1200 per ounce

The Australian dollar gold price is currently around the $2560 per ounce mark, implying robust margins of more than $1300 per ounce.

Not only does this highlight the strong underlying earnings that the project should generate, but it also provides investors with some comfort regarding the company’s ability to withstand a potential retracement in the gold price should that occur. 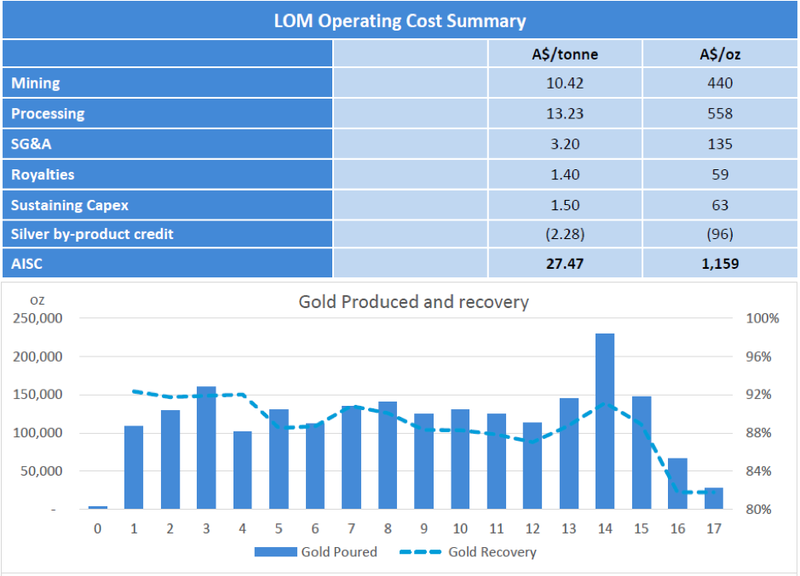 It is worth noting that underlying assumptions used in the PFS were based on a gold price of A$1600 per ounce, further reinforcing the economic stability of the project and indeed the significant earnings upside above the base case scenario projected in the PFS.

The contained gold metal in the mine plan comprises 64 per cent Ore Reserves and Indicated Resources, with the balance of 36 per cent derived from Inferred Resources.

Corbett is confident that the company can convert these Inferred ounces to the higher confidence Indicated category as drilling continues in parallel with the next stage of feasibility work.

Importantly, there was a high conversion of historic Resources to Reserves at Misima, which bodes well for the future performance of the operation.

Other key takeaways for investors include the relatively low capital intensity for a gold project of this scale and mine life, with forecast capital expenditure of A$283 million.

The compelling economic parameters speak for themselves, with life-of-mine revenue of almost A$5 billion, free cash-flow of A$1.5 billion, a pre-tax NPV of A$822 million using an 8% real discount rate and conservative A$1,600/oz gold price, and an IRR of 33%.

Taking into account these metrics, Corbett said, “These are outstanding results that highlight Misima as one of the best undeveloped projects in the Asia- Pacific region.

“It is also a platform from which we will continue to unlock further value through the targeted drilling campaigns currently underway at Misima.

“We are now planning a number of additional work programs that will feed into the definitive feasibility study (DFS), and these are anticipated to commence during the June quarter of 2021.” 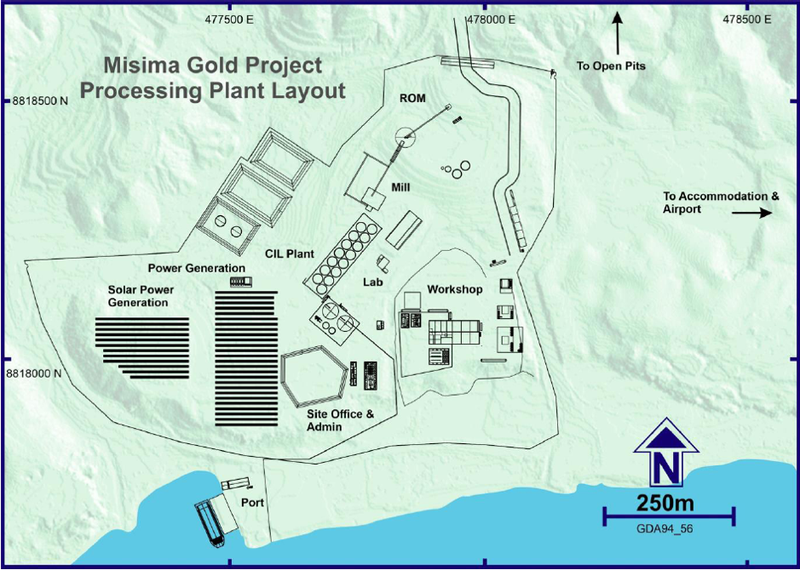 Historically, Misima was a very low-cost operation, and when operated by Placer Misima delivered life of mine average EBIT margins of 37% despite the weak prevailing gold price in its years of operation from 1989 to 2004.

The PFS has further reinforced the low-cost nature of mining and processing at Misima in delivering life of mine AISC of A$1,159/oz.

Kingston’s recent drilling was focused on its strategy of identifying near-surface ounces to deliver ore feed for the early years of operation into the Misima mine plan while access to the main Umuna orebody was re-established via a pit cut-back.

This led to the successful identification of Ewatinona as a 200,000 ounce starter pit for inclusion in the PFS.

Kingston has now identified a number of further target areas to continue to deliver on this strategy.

Management is currently undertaking drilling at Kulumalia to convert near surface ounces from Inferred to Indicated and potential reserve status.

The company is conducting further drilling at Umuna East, targeting the expansion and upgrade of the Inferred Resource in this area – there is the potential to add higher grade feed from this source to production in the early years.

There are historical Placer starter pits located between Umuna and Ewatinona that have had little follow up exploration.

Following the successful brownfield program at Ewatinona that resulted in its inclusion as a starter pit in the PFS, Kingston now intends to replicate this strategy at Kobel and Maika.

Desktop work is underway assessing existing data ahead of developing a drill program at these targets.

Management also intends to follow-up on the Abi discovery hole as its proximity to Ewatinona and the proposed processing plant location make it an ideal high-grade, near surface exploration target.

There are a number of near and medium-term share price catalysts that should continue to build on recent momentum.

First results for drilling activity currently underway at Misima should be reported in the March quarter of 2021.

Existing environmental baseline work will now start to expand to incorporate further elements for input into the environmental approvals process, important milestones in adding certainty to the group’s exploration program.

Metallurgical and geotechnical test work programs will commence shortly, and these will assist in confirming and expanding data for input into the definitive feasibility study.

Management expects to commence the DFS by mid-2021, and the release of any additional input data, such as an updated resource estimate, that could positively impact the study could provide further support for the company.