Hot on the heels of success at its Misima Gold Project in Papua and New Guinea, Kingston Resources Ltd (ASX:KSN) is preparing to recommence drilling at its 75% owned Livingstone Gold Project in Western Australia.

The company’s shares have increased approximately 40% in just over a week, buoyed by impressive exploration results at Misima, while also riding the wave of support for gold stocks.

Drilling at Livingstone provides the opportunity for the company to further leverage off the strong gold price which is up around $2030 per ounce in Australian dollar terms.

An initial program of approximately 2500 metres of reverse circulation (RC) drilling will be undertaken at the Kingsley Prospect, which was discovered by Kingston in 2018 during a program of air-core drilling which defined a near-surface zone of mineralisation over a strike length of more than 800 metres.

The air-core drilling identified significant mineralisation within a number of sub-parallel lodes striking west-northwest and dipping steeply to the north.

Drilling to date has been limited to the oxide zone, with mineralisation remaining open at depth, along strike and to the north as indicated below. 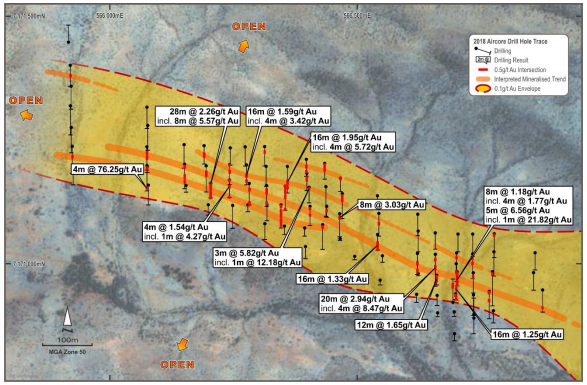 The upcoming RC program will be used to in-fill the Kingsley area and provide JORC compliant data to undertake a maiden Mineral Resource Estimate (MRE) later this year.

The program will also test for primary mineralisation at depth below the shallower oxide zone.

Kingston has been successful in securing co-funding for an 800 metre diamond drilling program at Kingsley through R19 of the WA Government Exploration Incentive Scheme (EIS).

The Livingstone prospect occurs along a prospective strike length of more than 30 kilometres as outlined below. 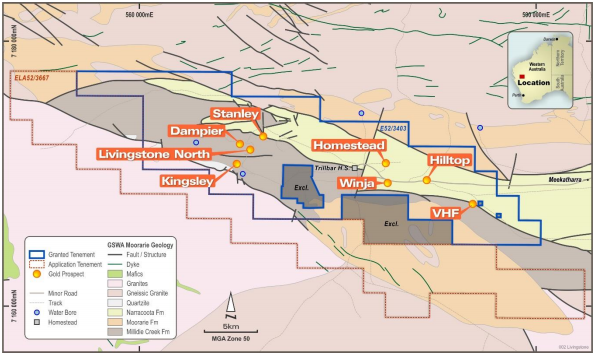 The diamond drilling will be undertaken following completion of the RC program, and is expected to provide critical structural and geological information that will assist in completing the Maiden Resource Estimate (MRE) and planning further exploration at Livingstone.

Commenting on the potential upside from these developments, managing director, Andrew Corbett said, “This is an important development in the Livingstone exploration program, with our initial RC campaign at Kingsley helping to move us towards a Maiden Resource Estimate.

‘’We’re also looking forward to evaluating the potential for deeper mineralisation in the fresh rock below these high-grade air-core intersections.’’

Misima is a proven producer that could be brought back into first stage production at a relatively early point.

By contrast, Livingstone could be a high-grade company maker with Kingston potentially benefiting from Misima’s cash generation throughout the exploration and potential development stages.

In any case, upcoming exploration results will be eagerly awaited, particularly given the high grade mineralisation delineated to date.