Kingston Resources Ltd (ASX:KSN) has reported promising results from the final drill hole at the key Ewatinona deposit, adding to prior Ewatinona drilling results which confirmed the presence of high-grade gold mineralisation outside the existing resource area.

Consequently, this drilling campaign has not only confirmed the strong grades traditionally associated with the area, but it has also paved the way to expand the resource beyond its already impressive level.

Ewatinona is located within the Quartz Mountain area of the 2.8 million ounce Misima Gold Project and contains a JORC 2012 Inferred Resource of 6.6 million tonnes at 1.0g/t gold for 220,000 ounces gold.

It is one of a number of areas to be drilled this year as part of an ongoing exploration program aimed at defining shallow, high-grade gold mineralisation with the potential to contribute early ounces to future mining studies.

The Placer group historically mined gold and silver from the Ewatinona, Kobel and Maika pits, producing a combined 147,000oz at 1.77g/t gold.

The current Ewatinona Resource is located less than two kilometres from the historical mill site, making it ideally situated to provide additional feed for a staged recommencement of production. 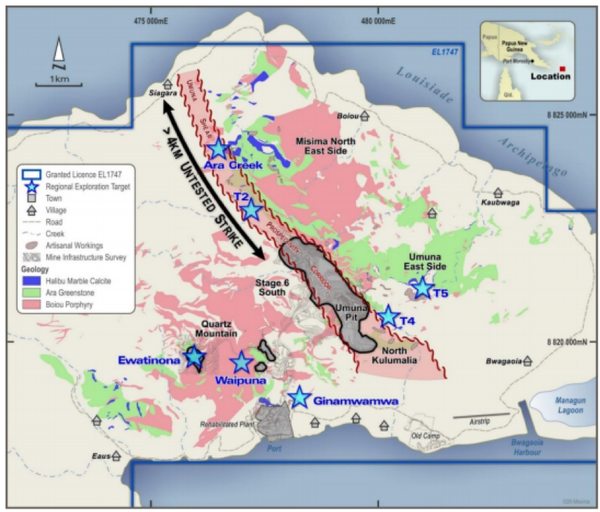 Having completed an initial 12-hole drilling program at Ewatinona in July 2019, which delivered a series of highly-encouraging assay results and confirmed that the resource remains open in all directions, this area is shaping up as a possible game changer.

Promising results from the 12-hole campaign included the final hole which featured 15.7 metres at 1.6 g/t gold from a shallow 40 metres, including 7 metres at 3.2 g/t gold.

There have been some broader quality grade intersections, including 20 metres at 1.8 g/t gold from 78 metres.

Drilling continues on a second target in the Quartz Mountain area, the Waipuna prospect, which was recently identified by a modern reinterpretation of historical geochemical data combined with geophysics and LiDAR information.

On the back of this news, the company is looking to ramp up exploration with a view to increasing the Mineral Resource, and on this note, managing director Andrew Corbett said, “Following interpretation of these latest results and the successful placement of the shortfall from our rights issue, we intend to mobilise a second drill rig to this area to conduct additional infill and extension drilling to underpin an updated Mineral Resource Estimate.

“Drilling is continuing on additional targets within the Quartz Mountain area, with Stage 1 now nearing completion, following which we expect to move to Misima North and Umuna East Side.