Ironically, it was a diamond drill hole (GDD065) that experienced some core loss that returned impressive multiple high-grade intercepts.

Importantly, the core loss occurred within a mineralised section between approximately 16 metres and 32 metres of GDD065, and management expects that this 16 metre section may represent a continuously mineralised zone.

A follow-up hole (GDD071) as indicated below has been drilled to confirm the true width and continuity of the zone with assay results due in the near term. 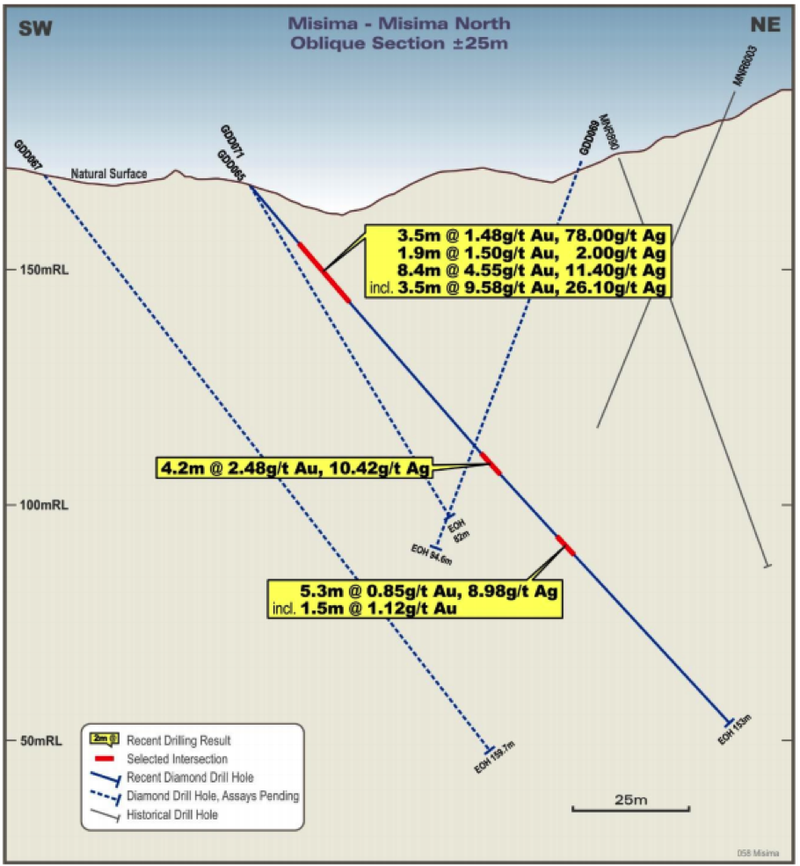 The follow-up hole can be seen entering at the same point as GDD065, running almost parallel to the areas of mineralisation indicated by the red intersections in GDD065.

Field work and structural analysis had elevated the potential at Misima North, suggesting that previous drilling had not properly tested the shear position and subsidiary structures.

As indicated below, GDD065 was part of the initial 8-hole drill program at the Ara Prospect within Misima North. 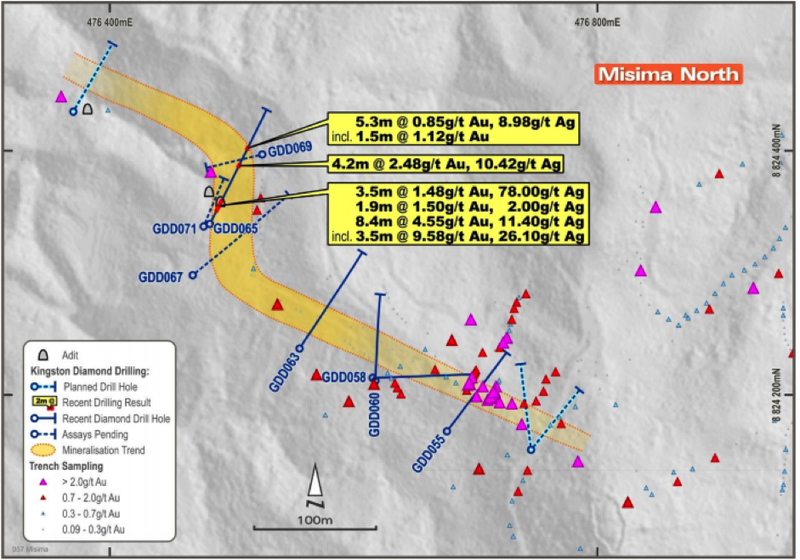 The program was targeting an interpreted north-west-trending breccia with anomalous surface geochemistry, within the interpreted extension of the Umuna Fault Corridor.

It is interpreted that drill holes GDD055, GDD060, GDD58 and GDD063 may have drilled below these near-surface targets, and as a result, the area requires further drill testing.

The high-grade gold results returned from Misima North confirm that the project hosts all the geological features that have been identified as conducive to gold endowment in Umuna-style mineralisation.

Silver values are also high in GDD065, with the intercept of one metre at 2.2 g/t gold and 201 g/t silver from 17.7 metres among the highest-grade silver intersections reported at Misima.

Follow-up drill holes (GDD067, GDD069, GDD071) have been completed below and across GDD065 to test continuity of interpreted structures and achieving maximal recovery of brecciated and oxidised material, positive signs from a geological perspective.

All drill holes have intersected structures and breccia bodies that are interpreted as extensions of those in GDD065.

Samples from the recent drill-holes and outcropping structures have been dispatched and assays are awaited.

The Umuna Fault Corridor remains highly prospective with outcropping mineralised structures and anomalous surface geochemistry to the north-west of GDD065 remaining untested, and follow-up drilling is planned in the June quarter of 2020.

Commenting on these developments and their significance in terms of potentially identifying sufficient new surface mineralisation for a starter pit, as well as outlining the group’s broader exploration program, managing director Andrew Corbett said, “We’re delighted to see such encouraging results from one of our first Misima North holes, with these assays confirming the presence of high-grade gold mineralisation 2.5 kilometres north of the existing Umuna Resource boundary, and highlighting the prospectivity of the broader Umuna Fault Corridor which hosts both the Umuna and Misima North target areas.

The areas Corbett refers to are illustrated on following map. 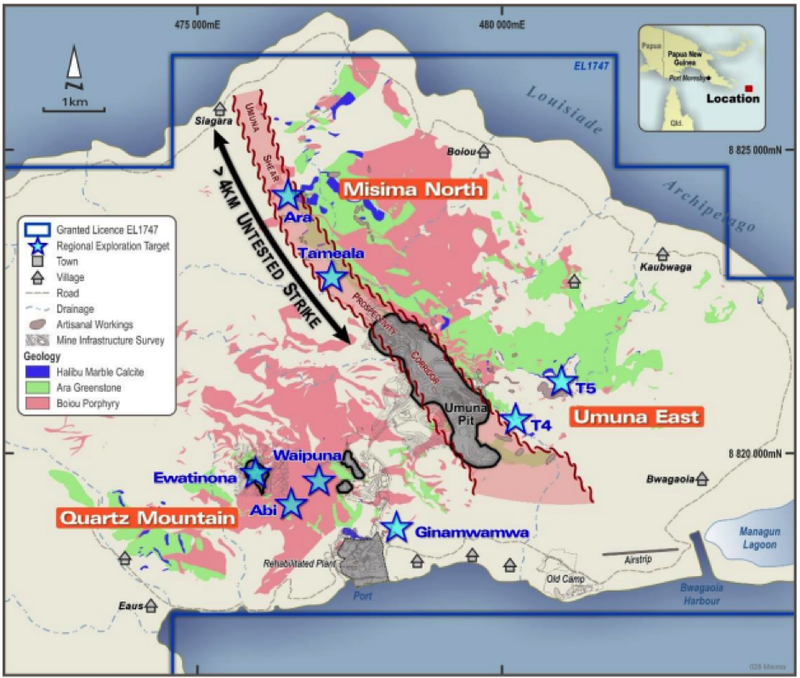 Corbett went on to say, ‘’The entire 4 kilometre strike length of the Umuna Fault Corridor (see above) remains largely untested, providing a large, high-quality exploration target for the company to progressively drill.

‘’Such successes are a strong credit to the excellent work being done by our geological team in pursuit of our strategy to identify near-surface mineralisation to provide early mill feed for the Misima mine plan.

“We currently have two rigs drilling at Ewatinona in the Quartz Mountain area as we look to upgrade and potentially expand the existing Resource in this area, with drilling also planned to follow-up on the initial positive results at Abi.

‘’Once those campaigns are complete, we then expect to return to Misima North for a second round of drilling.”