The company has received a series of outstanding high-grade assay results from a recently completed 17-hole, 2,375 metre reverse circulation (RC) drilling program at the Kingsley Prospect designed to test beneath and along strike from highly encouraging air-core results.

Kingston continued to delineate high-grade mineralisation close to surface including 10 metres at 12 g/t gold from 20 metres.

However, it is encouraging to see numbers such as 3 metres at 11.4 g/t gold from 95 metres.

The following confirms that high-grade mineralisation continues at depth, increasing management’s confidence that it is on the mark in anticipating mineralised structures steeply dipping to the north. 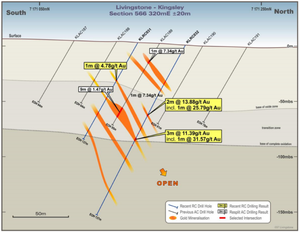 Diamond drilling to test for high grades at depth

The results include broad shallow high-grade oxide gold intercepts, as well as narrower zones of high-grade primary mineralisation at depth within fresh rock, demonstrating the growing scale and potential of the gold mineralised system at Kingsley which was initially discovered by Kingston in 2018.

To date, only 800 metres of this initial discovery has been meaningfully drilled, with the mineralisation remaining open to the north-west and east, where a 1.2 kilometre strike length of known mineralisation is yet to be fully tested.

Importantly, the company is yet to undertake diamond drilling which will investigate deeper mineralisation with management hoping to extend this important discovery at depth.

On this note, the Western Australian Government has co-funded diamond drilling, scheduled for the December quarter ahead of further RC drilling to establish a maiden JORC Mineral Resource Estimate.

The establishment of a maiden mineral resource would represent a significant milestone in progressing the project, and indeed may well be one of the largest share price drivers experienced by the company in 2019.

This would build on an already strong foundation with the company’s shares having surged more than 50% in the last two months on the back of outstanding results from its 2.8 million ounce Misima Gold Project in Papua New Guinea.

The most recent development at that project was just last week when the company announced the discovery of a new zone of shallow high-grade gold mineralisation at the Abi prospect.

Further drilling throughout the remainder of 2019 should leave the company well-placed to deliver an updated mineral resource estimate, indicating there are multiple share price catalysts in the mix.