The world-class Misima project is management’s key focus as it contains a robust resource and a production history of over 3.7 million ounces, as well as outstanding potential for additional resource growth through exploration success.

Kingston currently owns 70% of the Misima project, as well as 75% of the Livingstone Gold Project in Western Australia.

Central to today’s update is promising news regarding assays from drilling at Ewatinona that has confirmed the potential of the resource, as well as indicating it is open in all directions.

Ewatinona currently contains a resource of 200,000 ounces and as indicated below it sits within the Quartz Mountain area of the Misima Gold Project. 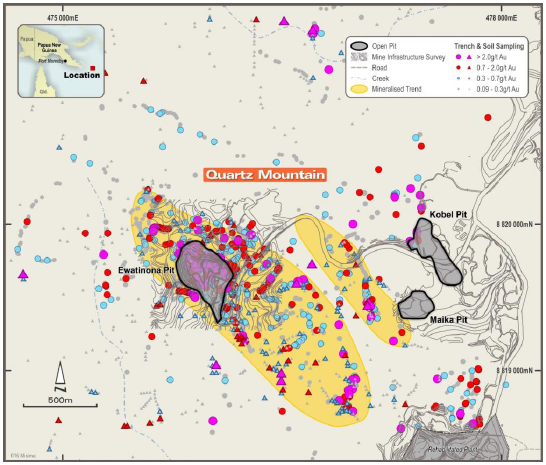 Placer historically mined gold and silver from the Ewatinona, Kobel and Maika pits producing a combined 147,000 ounces at 1.8 g/t gold.

The current Ewatinona resource is less than two kilometres from the historical mill location.

The highly encouraging assay results confirm the potential of the resource which remains open in all directions.

The increased understanding of the geology has resulted in an additional hole being recently completed, and assays are pending.

During the September quarter a review of all current and historical data will be completed, including Leap Frog modelling of the resource before the next round of drilling at Ewatinona.

Drilling continues on a second target in the Quartz Mountain area, the Waipuna prospect.

This was recently identified by a modern reinterpretation of historic geochemical data combined with geophysics and LiDAR information.

Looking at the broader picture, the existing 2.8 million ounce Misima resource may already be of sufficient scale to support a potential long-life mining operation.

Current exploration targets are prioritised with a view towards delivering new near-surface mineralisation.

Such targets are likely to have the largest impact on project economics as access to near surface ounces can boost early years’ cash flow while access to the main Misima resource is developed.

While this appears to be a logical approach, it should be noted that feasibility or pre-feasibility studies have yet to be completed to confirm this hypothesis, and investors should be aware that there is currently no certainty of future mine development.

As indicated below, the Quartz Mountain area is one of a number of such targets Kingston plans to drill over the balance of 2019. 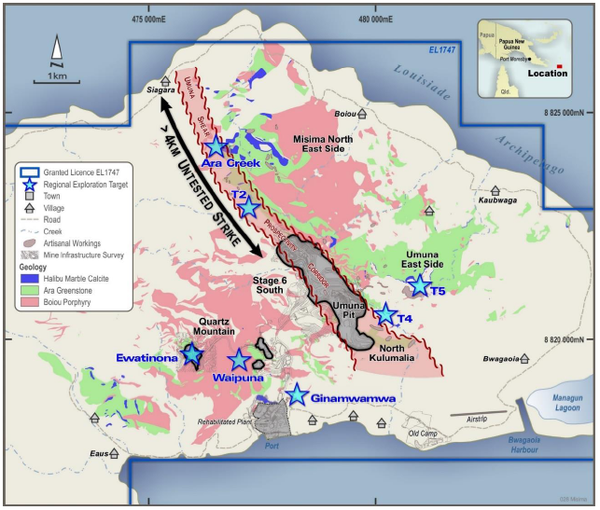 The Quartz Mountain existing resource, extensive surface mineralisation and proximity to the mill site make it an ideal target.

‘’Our recent Ewatinona drill results have confirmed the historic resource potential and provided current geological knowledge to help our team design the next phase of step out drilling on the Ewatinona resource.

‘’In addition to Ewatinona there are number of near mine prospects that have been identified within the Quartz Mountain area.

‘’These targets are all exciting opportunities for Kingston, with outstanding potential to deliver additional near surface ounces.

‘’Our current exploration strategy is firmly focused on establishing sufficient ounces from these targets to commence mining studies.”