Kingston is accelerating its exploration initiatives across its various prospects, and commencement of this drilling program comes only a matter of weeks after the company discovered a significant new zone of high-grade shallow gold mineralisation at the Abi Prospect, located immediately north-west of the historical Placer processing plant location at its Misima Gold Project.

Recent field work and structural interpretation has elevated the potential at Misima North, suggesting that previous drilling did not properly test the shear position and subsidiary structures.

The following map illustrates the connection between Misima North and Umuna East with arguably the most significant characteristic being the four kilometres of untested strike that extends north of Umuna and adjacent to the proven mineralised section of Misima North. 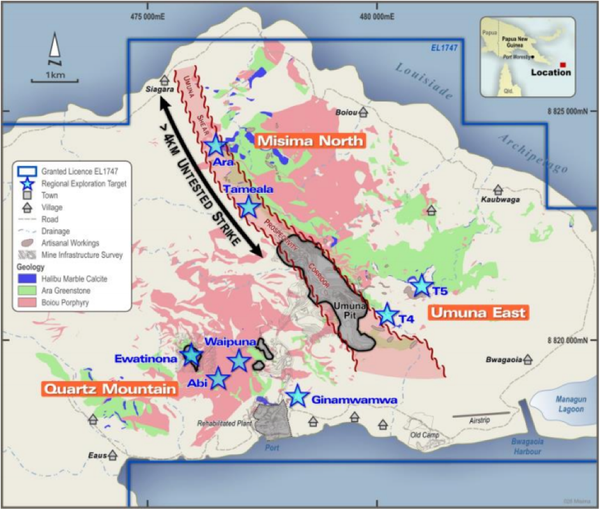 Channel sampling at Misima North, a similar distance from Umuna included 119 metres at 1.6 g/t gold and 176 metres at 1.1 g/t gold.

Though dated historical records have not been verified, small-scale underground production occurred around the 1940s with sampling within one underground adit recording 16 metres at 21.3 g/t gold.

Kingston’s managing director, Andrew Corbett highlighted the significance of using modern exploration techniques in terms of increasing the chances of discoveries in the historical underground mining areas of Misima North.

Corbett underlined the company’s accelerated exploration program in saying, “Misima North represents the third new regional target outside of the existing 2.8 million ounce resource to be drilled by Kingston, and follows the discovery of the Abi prospect within the Quartz Mountain area last month.

‘’With a second diamond rig on site, we now have drilling underway at two key regional targets, with drilling also commenced on Umuna East.

“Commissioning of the second drill rig occurred during September with additional support fleet and equipment arriving on the island during the third week of September.

‘’It was a great effort by our drilling contractor and the Kingston team to bring this rig on line ahead of schedule.

‘’We are now well placed to deliver a material uplift in drill metres and an acceleration in drill testing these exciting regional targets.”

Kingston’s initial program in Misima North is expected to comprise 10 diamond holes with planned depths of between 80 metres and 130 metres, for total drilling of approximately 1100 metres.

Previous field exploration undertaken by Kingston at Misima North included three short trenches dug within the prospective Ara area which includes a number of historical underground workings that were active prior to World War 2.

The trenches were designed to test lithological and structural contacts between prospective outcropping greenstone and limestone adjacent to the Umuna Fault Corridor, and they successfully intersected significant gold grades in two contact areas which featured 12 metres at 3.8 g/t gold, including grades up to 6.9 g/t gold, as well as 15 metres at 2 g/t gold.

In addition, rock chip samples were taken from prospective outcrop in the area, yielding individual spot grades as high as 44.6g/t.

The designed holes will be targeting a north-west trending breccia (supergene enriched) with anomalous surface geochemistry.

As indicated below, the drill holes are planned along the footwall of a north-west trending structure within the interpreted extension of the Umuna Fault Corridor.

Data collected from this program will also complement the company’s structural interpretation of the area to enhance the geological model and assist in planning of future holes.