Gold and cobalt explorer, Alloy Resources (ASX: AYR) provided an update on Thursday regarding its five projects, four of which are located in Western Australia, and one in the Broken Hill region of New South Wales.

One aspect they all have in common is their proximity to proven quality projects operated by other ASX listed companies. On the score of other companies, AYR has the benefit of an extremely experienced management team that has a proven record in terms of taking projects from greenfield to production in an efficient and timely manner.

Allan Kelly joined the team in February following a stint of more than seven years as the founding MD of Doray Minerals (ASX: DRM). Kelly founded Doray in mid-2009 and managed the company through the pre-IPO stage and listing on the ASX in February 2010, followed soon after by the discovery, funding, permitting, construction, commissioning and operation of the high-grade Andy Well Gold Project.

Experience in astutely managing organic growth, as well as expansion through acquisitions

More recently, Kelly managed the takeover of Mutiny Gold Limited and the subsequent funding, construction and commissioning of the high-grade Deflector Gold Project, which recently commenced production. Consequently, he brings a degree of corporate experience which may be beneficial for a smaller player such as AYR as it looks to develop and build scale around its existing projects.

When it comes to delivering strong share price returns it is hard to beat Kelly’s fellow non-Executive Director, Kevin Hart’s record. During his time with Dacian Gold (ASX: DCN) it was a 10 bagger with the company’s share price increasing from 38 cents in July 2015 to an all-time high of $3.88 at the start of August 2016.

Summing up Kelly’s contribution to Doray, Non-Executive Chairman, Mr Peter Lester, said, “In just over seven years, he has taken the company from a concept for a new greenfields mineral explorer with a portfolio of projects in Western Australia and South Australia to an ASX300 gold producer which has funded and built two new high-grade gold operations within four years”.

Of further significance is the fact that AYR’s most advanced project, the 1000 square kilometre Horse Well Gold Project located in the north eastern goldfields of Western Australia is in territory well-known to DRM to the extent that it has earned a 60% interest as a joint venture partner over the last two years.

The joint venture is conducting broad first and second pass exploration with the aim of discovering a 1 million ounce gold deposit capable of supporting a 100,000 ounce per annum gold operation.

Horse Well is located in a highly prospective region which hosts a number of major gold deposits, including Northern Star’s 220,000 ounce per annum Jundee gold mine.

Cobalt the other string to Alloy’s bow

The Ophara cobalt project located adjacent to the South Australian border, west of Broken Hill in New South Wales is one of AYR’s other important assets.

The area is known to have significant Cobalt mineralisation, with large resources defined at the adjacent Mutooroo and Thackaringa deposits. Of importance is the fact that the company isn’t just like many new entrants that are kicking stones looking for cobalt, it has an advanced cobalt-gold prospect at the Great Goulburn Prospect as indicated below. 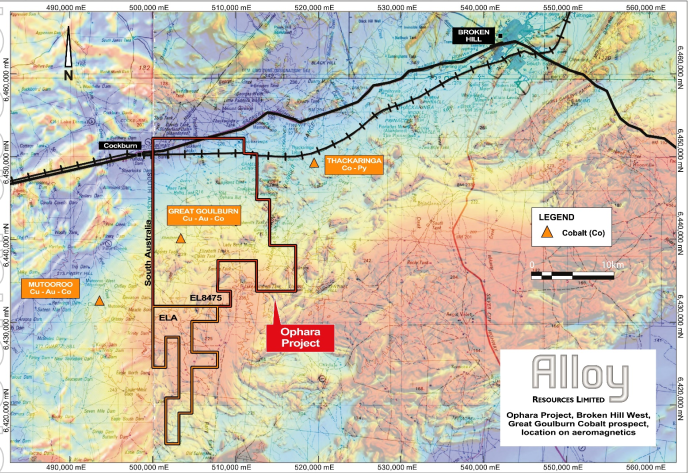 The mineralisation style has similarities to both Mutooroo and Thackaringa Cobalt deposits as shown on the map, however it is unique in having low-copper and high gold mineralisation associated with the cobalt.

Interpretation of the available geological and geophysical information suggests that there are numerous poorly tested indications of mineralisation throughout the exploration licence that warrant renewed exploration focus.

Drilling in late February 2017 was planned to test the inferred quartz-magnetite geological host units to mineralisation. This interpretation was based on compilation of the historical geological mapping, rock chip sampling, geophysical surveys and six previous drill holes.

The following base image indicates results from Alloy’s recent ground magnetic survey, as well as historic drilling. The brighter red-purple-white areas are highly magnetic and define the subsurface location of the prospective quartz-magnetite geological unit, as well as highlighting significant results. 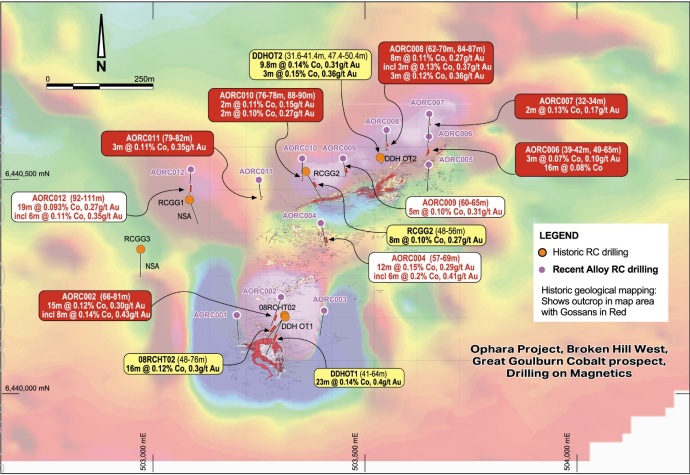 Understanding of the mineralisation has been greatly enhanced following this drill program. The results indicate that there is a combination of strata-bound mineralised quartz-magnetite units, but also there are areas where mineralisation is more related to faults and quartz veins with sulphide.

Chairman points to similarities between Ophara mineralisation and Mutooroo deposit

Executive Chairman, Andy Viner highlighted the importance of this combination of features saying, “It is similar to controls seen at the Mutooroo deposit located 10 kilometres to the south west”.

Viner noted that Great Goulburn mineralisation has been shown to vary in strength both along strike and down dip, with pods of higher grade mineralisation focused in certain areas such as fold hinges or adjacent to cross-cutting structures.

In explaining the various features, Viner said, “Whilst there appears to be a close correlation between mineralisation and Magnetite, this is not as ubiquitous as the association with pyrite, and ground electromagnetic surveying in 2001 illustrated this strong relationship to pyrite, defining a strong conductor”.

Consequently, there is solid evidence that AYR’s tenements are well located, and in relatively quick time management has gained a sound appreciation of geological features which will assist in shaping the next round of exploration initiatives.