KBL gets closer to drilling at Pearse North

The deposit, which lies about 200m north west of the operating Pearse open cut gold mine, has an ore reserve estimate of 179,000 tonnes at 2.5 grams per tonne gold and 21 grams per tonne silver.

This is an estimate and there are no firm numbers at this stage, so don’t use these numbers as the foundation of any investment decision with regard to this stock and invest with caution.

The submission of its Statement of Environmental Effects is the last major work to be completed by KBL before it gets the approval to start mining at the deposit.

The company said as part of the statement, it was able to confirm that 50 people would be employed at the project on an ongoing basis in addition to 30 contractors.

KBL is aiming to develop Pearse North as a shallow, open pit to get gold to market as quickly as possible given the sentiment for gold at the moment.

The sentiment was in evidence last week during the annual Diggers&Dealers event in Kalgoorlie.

Thanks to an upswing in the gold price, 29 of the 43 presenters were from the gold sector.

About KBL and Mineral Hill

The project includes several deposits, including the Pearse which is producing, and the Pearse North deposit which is next on the slate for development.

Prospective targets include the Jack’s Hut, and the A,B, G, and H lodes within the Southern Ore Zone. 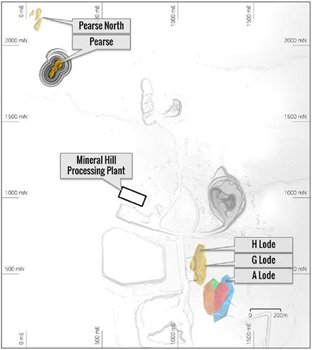 A map of deposits in the area

KBL’s deposits and targets are all within close proximity to the company’s 100% owned CIL and floatation production plant which has recently received over $30 million worth of upgrades, allowing it to process various ore types and improve recovery rates by over 50%.