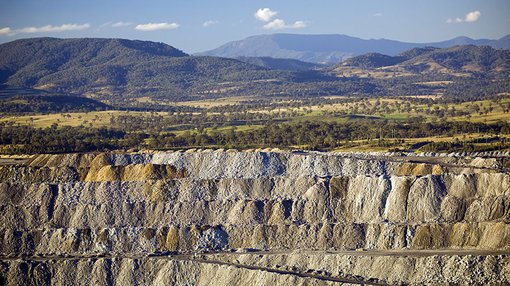 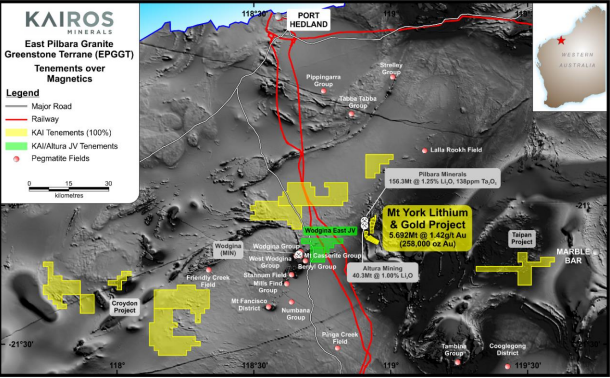 The drilling program, which comprised 21 holes, focused initially on testing for potential extensions to the Main Hill and Breccia Hill deposits, over a further one kilometre of strike eastward to Gossan Hill between surface and a maximum vertical depth of 150 metres (as seen below). 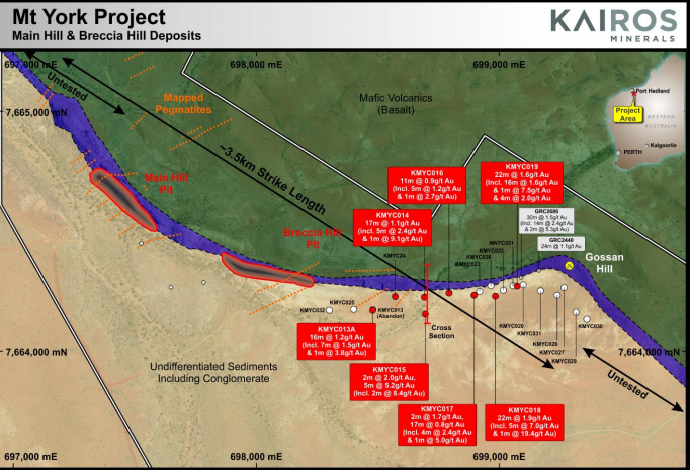 It should be noted, that this is an early stage tech company and success is no guarantee. Investors should seek professional financial advice before making an investment.

KAI’s technical team identified a data ‘shadow’ of some 400 metres in strike immediately east of the Breccia Hill pit. Subdued aeromagnetic responses and a lack of outcrop seemingly led previous explorers to assume that the BIF, which hosts the Main Hill – Breccia Hill deposits, had been structurally terminated at this location and, consequently, the area remained unexplored.

Results have now been received for the first seven holes of the program. All holes have successfully established continuity of the targeted BIF sequence, and assays have supported the visual assessment of KAI’s site supervising geologists that the holes intersected wide zones of strong gold mineralisation at shallow depths.

Importantly, each of the intercepts include narrower intervals of high grade gold (up to 19 grams per tonne of gold hole KMYC018) within the broader mineralised envelope, suggesting the potential development of high grade ‘shoots’.

The recent drilling demonstrates strong potential for a significant upgrade of the current JORC 2012 Indicated and Inferred Mineral Resource of 5.692 million tonnes at 1.42 grams per tonne for 258,000 ounces of gold at the Mt York Project.

“Early indications are that our drilling has delivered a major breakthrough, with all of the first seven RC holes returning significant widths and grades of shallow gold mineralisation – we’ve confirmed that the BIF is there, it’s well mineralised and open in all directions, indicating outstanding potential to expand the resource along this horizon.”

“What is even more exciting is that there are further immediate drilling targets to the south-east of this zone and to the west, with the total strike length of prospective BIF horizon amounting to at least 3.5km. The current resources account for less than 50% of that, extending over just 1.5km. This clearly shows that the BIF-hosted gold system at Main Hill-Breccia Hill is much larger than previously thought, with outstanding potential to delineate significant shallow resources along the entire strike length.”

“There are also strong similarities between what we see at Mt York and other significant BIF-hosted gold systems in Western Australia, such as the Westralia deposit at Dacian Gold’s Mt Morgans Gold Project near Laverton. The rapid growth of that gold system into a 1.6Moz deposit has been an outstanding achievement and is something we have watched closely. We believe there is outstanding potential to pursue a similar strategy at Mt York.”

“Once we develop a better understanding of the plunge controls and orientation of the mineralisation, we intend to target depth extensions of the shallow mineralisation we are uncovering along the BIF horizon. That represents an exciting future growth opportunity for us at Mt York.”

Currently, the company is awaiting assays for an additional 13 holes, and will report results as they are received.