The current program, comprising approximately 5,000 metres of RC drilling, has been doubled in size to about 10,000 metres.

Drilling at the large Fuego gold target located on the Croydon Project is now complete and an additional 1,500 metres of drilling is planned at the Tierra prospect at Croydon.

The rig will then relocate to Mt York to undertake a program of approximately 5,000 metres, targeting extensions of existing deposits and potential new discoveries.

The company has completed 20 RC holes for a total of 3,815 metres at the Fuego prospect. 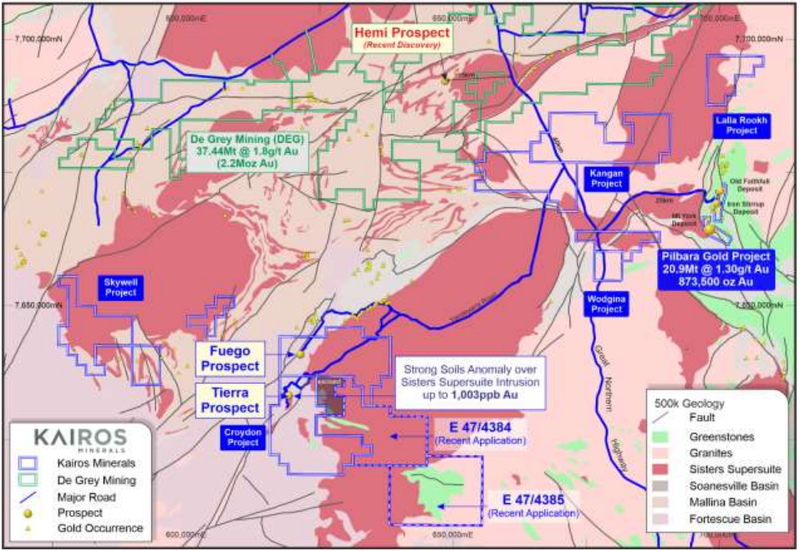 The rig has been mobilised to the Tierra prospect, with approximately 10 reconnaissance holes planned to be drilled in this first-pass program.

There is no previous drilling at Tierra prospect, and the targets are supported by strong geochemical anomalies coincident with geophysical features defined by Kairos’ recently completed Sub-Audio Magnetic (SAM) survey.

The previous rock chips and soils sampling programs at the Tierra prospect delineated a three kilometre long corridor of highly anomalous soils and rock chips, including the outstanding surface copper and gold grades from rock chip sampling in the areas shown below. 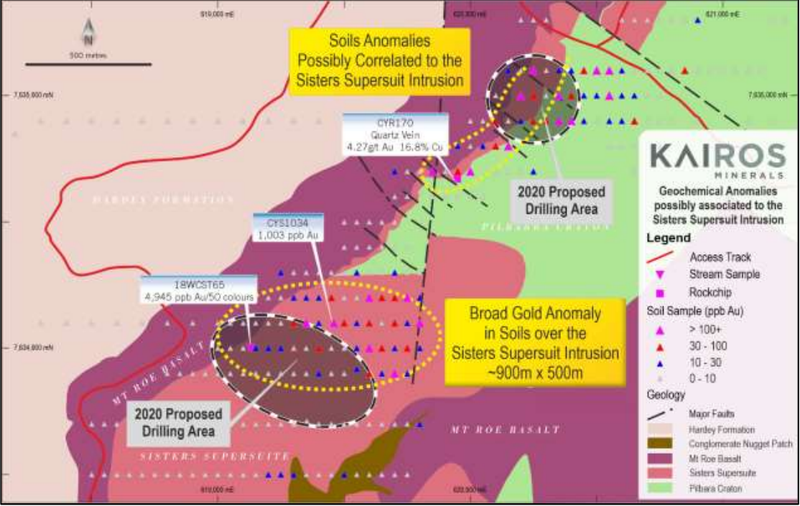 Another RC program is to be completed before the end of the year with approximately 5000 metres of drilling designed to test targets at Mt York, Iron Stirrup and Old Faithful deposits, as well as the Green Creek and Zakanaka prospects.

This could potentially increase the group’s 873,000 ounce resource at the Pilbara Gold Project.

Preliminary results from the SAM survey conducted at Iron Stirrup and Old Faithful deposits have generated new targets along strike of the previously defined mineralisation.

Highlighting the multiple upcoming share price catalysts, Kairos executive chairman Terry Topping said, “The net result of all of this increased activity is that shareholders can look forward to strong and regular news flow with drilling updates and assay results from now through until Christmas and into early next year.

‘’This is a really exciting time for Kairos as we move closer to our goal of hopefully uncovering a significant new Pilbara gold discovery while also expanding our resource position at Mt York.”