Shares in Kairos have increased ten-fold in the last four months, and the company has bolstered its coffers following a successful capital raising.

A track-mounted rig is expected to arrive on site in mid-August, starting the first program at the Mt York deposit to test the north-west extension of the mineralisation.

Only one historical hole has been drilled over this target area within Kairos’ ground.

The drilling program is much anticipated as Pilbara Minerals holds the adjacent ground to the west and it recently conducted an RC drilling program to test gold mineralisation similar to Kairos’ Mt York deposit.

Included in the results was an intercept of 16 metres at 2.4 g/t from 16 metres, just 1.2 kilometres from Kairos’s Mt York Mineral Resources.

The RC drilling program is designed to test targets at Mt York, Iron Stirrup and Old Faithful deposits, as well as the Green Creek and Zakanaka prospects as shown below. 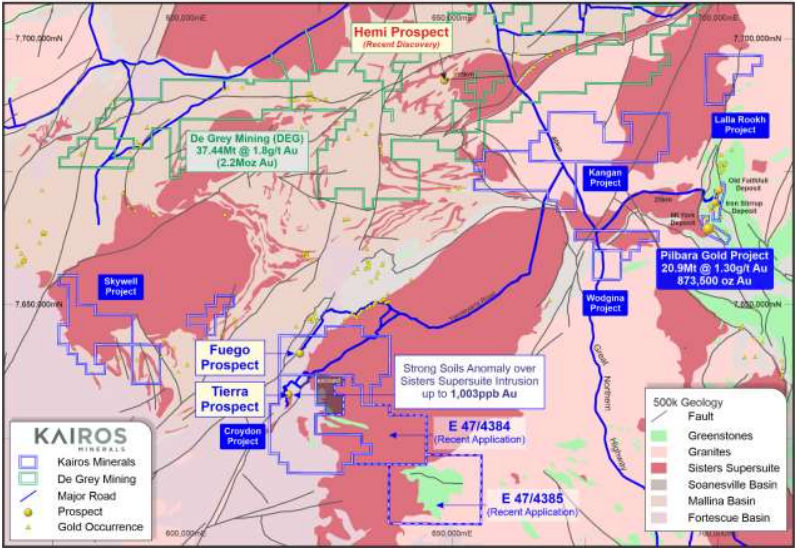 Kairos is well funded to complete this extensive drilling campaign with executive chairman Terry Topping saying, “With the recent closure of the rights issue marking the completion of our $4.2 million capital raising, the company is fully-funded for upcoming exploration activities across our flagship Pilbara Gold Project.

‘’The 2020 campaign is about to move up a gear with the imminent commencement of a 5000 metre RC program across the Mt York and Croydon Projects.

“Drilling will initially target extensions of the Mt York, Iron Stirrup and Old Faithful deposits at Mt York before moving on to test the exciting greenfields targets at Fuego and the Tierra prospects within the Croydon Project.

‘’We are also making excellent progress with other key elements of our exploration campaign, with the ultrafine soil sampling program over the Kangan Project now complete and the exploration team now relocated to the Skywell Project for mapping, soil sampling and rock chip sampling.

“We are also currently processing data from the airborne magnetic and radiometric survey, which will help us enormously in trying to identify prospective target areas for intrusive-related gold discoveries.”

Expanding on the group’s upcoming exploration strategy, after completing the drill program at Mt York, the rig will be moved to the Croydon Project area to test the greenfields Fuego and Tierra prospects the south-east.

There has not been any previous drilling on these prospects, and the targets are supported by strong geochemical anomalies coincident with magnetic features defined by Kairos’ recent airborne geophysical survey.

A ground-based geophysical program due to start in early August has been designed to support drill targeting at the Fuego and Tierra prospects (Croydon Project), as well as the Old Faithful and Iron Stirrup deposits (Mt York Project).

Elsewhere, Kairos has now completed the first-pass regional soil geochemical program for the Kangan Project which lies to the north of the Pilbara Gold Project.

Soil sampling was conducted on intervals covering intrusion-related gold mineralisation targets and structural targets defined by mapping and by the preliminary data from the airborne geophysical survey.

A total of 1,587 samples were collected, and field personnel have now moved the exploration camp to the Skywell Project area which lies to the west in order to commence a soils and rock chip sampling program, mapping and drone surveys.