Shares in gold explorer Kairos Minerals (ASX:KAI) surged more than 13% when the market opened on Friday morning after the company announced initial assay results from its Terra prospect at the Roe Hills project located 120 kilometres east-south-east of Kalgoorlie.

Results included grades of up to 14.6 grams per tonne gold, effectively confirming a significant new trend extending over a strike length of approximately 2 kilometres.

The new intercepts are located more than 500 metres apart and confirm strike and depth continuity of the interpreted Main Zone of mineralisation. Results are pending from an additional hole that was drilled 500 metres to the north of the prospect, indicating KAI could be a news flow driven story.

The recently completed made in drilling program at the Roe Hills project comprises 19 RC holes over a length of 3422 metres and four diamond cored holes over 695 metres.

Assay results are pending for the remainder of the holes completed at the Ginger Kiss, Talc Lake and the newly identified Lady of the Lake prospects. Initial results confirm the significant gold opportunity which occurs within the broader 40 kilometre strike length of the largely unexplored Aldiss Fault Corridor.

Promising grades from thicker gold zones located beyond historical drill intercepts can be seen below. 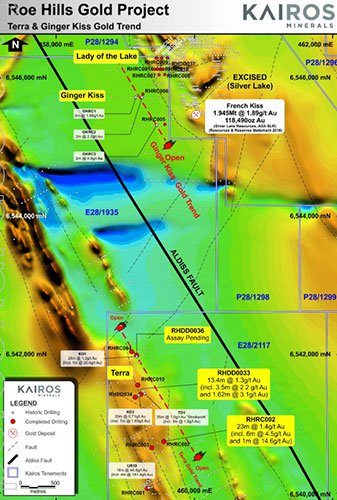 Commenting on the geological features identified in a relatively small first pass drilling expedition, KAI’s Managing Director, Joshua Wellisch said, “Although it is early days we are seeing all the signs of a potentially big system – intense alteration associated with large volumes of fluid movement, extensive stock-worked style quartz carbonate veining and a favourable package of mafic host rocks similar to those seen to the north at Breakers Lake Roe project”.

As can be seen below, KAI’s tenements are strategically located in close proximity to the highly prospective Aldiss fault. The group also has some high profile neighbours with Silver Lake Resources adjacent, Breaker Resources just to the north and the massive 70 million ounce Golden Mile superpit approximately 100 kilometres to the west. 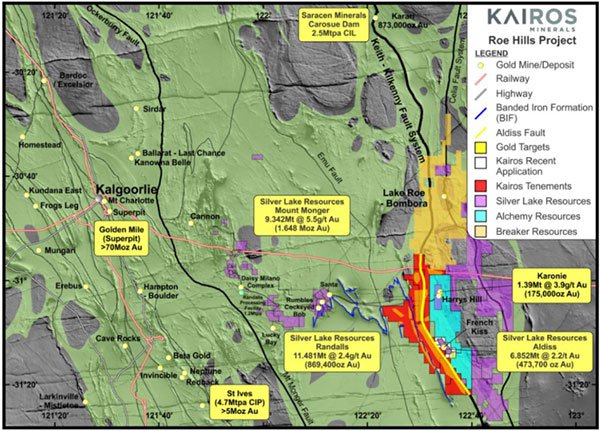