Shares in Kairos Minerals Ltd (ASX:KAI) were up by approximately 20% on Monday after the company announced positive exploration news from the Skywell Project, part of the group’s broader Pilbara Gold Project in Western Australia.

This substantial spike in the company’s share price occurred under some of the highest daily traded volumes recorded in the last two years.

Initial rock sampling at Skywell returned high-grade assay results including 12.9 g/t gold from a quartz vein in a gabbro unit of the Sisters Supersuite intrusion.

While this is definitely good news, it is just part of what has been a much bigger story over the last three months particularly as the group’s share price has increased eight-fold.

The company’s shares have more than doubled since June 23 when Kairos announced that it was undertaking a non-renounceable pro-rata entitlement offer to eligible shareholders of ordinary fully paid shares at an issue price of $0.011 per share. 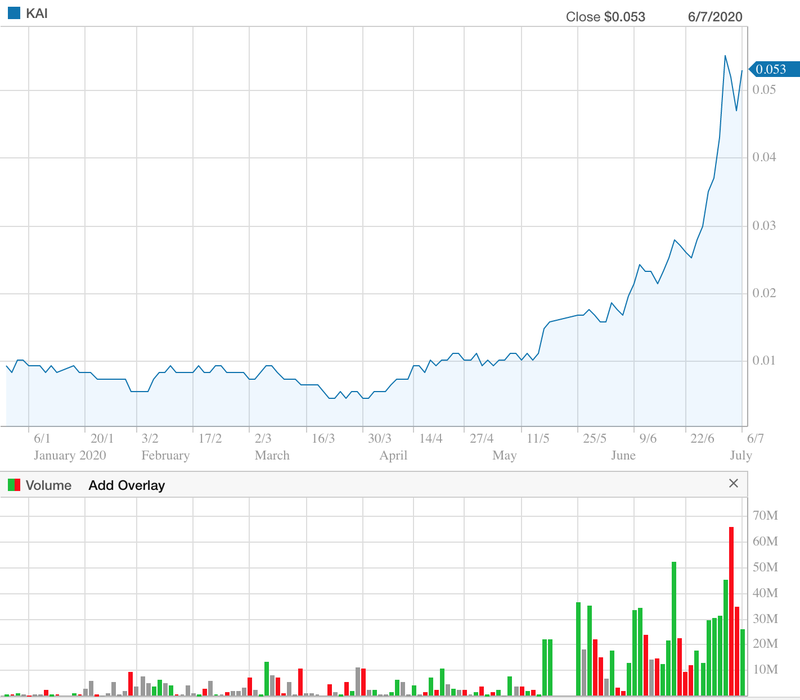 This offer was on the basis of 1 new share for every 8 shares held at the record date on June 25, 2020 (Record Date), with one free attaching option for every two shares subscribed.

This has allowed the company to raise up to approximately $1.7 million before costs which will be used to fund exploration work programs at various areas across the group’s highly prospective projects.

Broadly speaking, funding will be put towards the company’s Pilbara Gold Project, geochemistry programs and drilling programs across priority intrusive-related gold targets at the Kangan and Skywell Projects, drilling and mining studies at the Pilbara Gold Project, reverse circulation drilling at the large Fuego gold anomaly, as well as being used for working and other capital requirements. 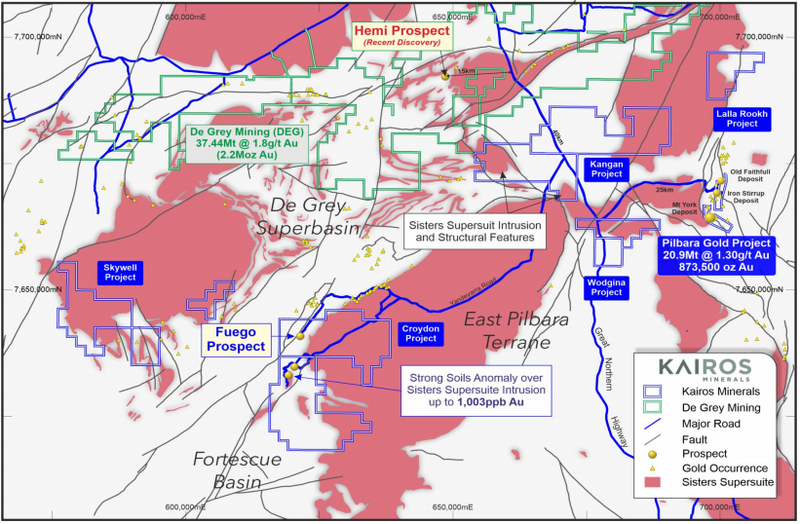 In early March, Kairos released an updated global mineral resource inventory that increased the size and quality of the resource as well as providing greater confidence in its ability to progress the Pilbara Gold Project.

This followed an extensive review of existing data, including the results from the latest drilling program over the Mt York Deposit and with the application of new parameters, the new global Indicated and Inferred Mineral Resource for the centrally located Mt York, Iron Stirrup and Old Faithful deposits.

Three deposits have now been brought under the Mt York gold deposit banner which has 17.2 million tonnes at 1.26 g/t for 697,700 ounces of contained gold.

The significant increase in the Indicated Mineral Resource for the Mt York Deposit stemmed largely from the results of the late-2018 reverse circulation drilling campaign, comprising 51 holes for 6,710 metres.

While the above map focuses on the broad range of prospects, including those further west of where the established resource has been delineated, the following narrows in on the key Pilbara Gold Project Area, in particular the Mt York deposit. 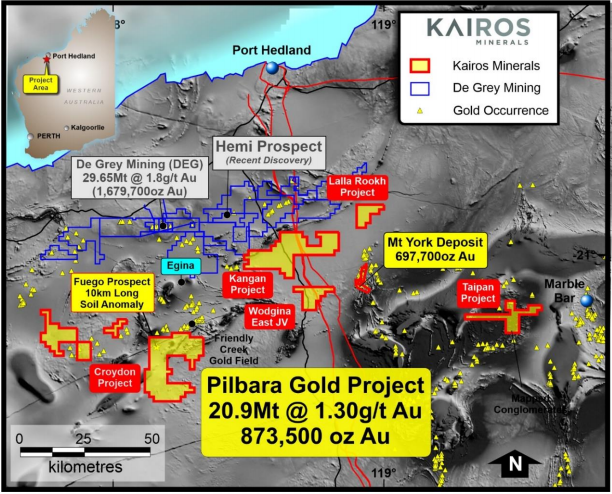 This also highlights the proximity to De Grey Mining’s gold resource of nearly 1.7 million ounces, as well as the Hemi Prospect which De Grey believes will be a game-changer.

Certainly, assay results suggest they could be on the mark with near-surface returns including 44 metres at 5.1 g/t gold and 46 metres at 6.6 g/t gold.

As can be seen above, Kairos has a number of projects in close proximity to Hemi, and in commenting on the potential relationship between the outstanding grades returned at Skywell and the results at Hemi, executive chairman Terry Topping said, ‘’The presence of gold grades at these levels has defined a significant high-grade gold anomaly which clearly warrants follow-up.

‘’Gold can often occur in quartz veins on the margins of the sort of big intrusive-features we are targeting for potential Hemi-style discoveries, so this increases our confidence in the scale and potential of the opportunity here.

“We are currently about halfway through an ultrafine soil sampling program at the Kangan Project and, once the team is finished there, we will relocate them to Skywell to undertake systematic soil sampling to help define drill targets.

‘’Our multi-pronged exploration program is also advancing on other fronts, with the extensive airborne magnetic and radiometric survey over the broader Pilbara Gold Project now complete and data processing underway.

‘’We have also appointed a contractor to upgrade access to the Fuego gold target and we are in the process of finalising contractor selection for the upcoming drill program at Mt York and, following that, Fuego.”

In mid-June, Kairos expanded its Pilbara Gold Project by securing a strategic tenement package located immediately to the south-east and adjacent to its Croydon project.

This doubled the size of the company’s landholding at Croydon, giving coverage of a highly prospective suite of rocks including the regionally significant Sisters Supersuite intrusions.

Explaining the strategic significance of this acquisition, Topping said, “Evidence from the recent Hemi gold discovery suggests that the margins of these large intrusive features where they intrude granites is now highly prospective for new gold discoveries.

‘’This further strengthens our extensive pipeline of exploration opportunities across the Pilbara gold district.”

With the gold price hovering in the vicinity of A$2500 per ounce, companies in that space are likely to continue to receive robust support.

However, there will be a particular focus on those that are approaching the transition point from exploration to production especially where near-surface mineralisation can be accessed relatively quickly.