These developments haven’t been missed by investors with the company’s shares surging more than 130% from 6.5 cents at the start of November to hit an intraday high of 15.5 cents, a level the group hasn’t traded at since 2011.

In November, Thompson announced it was to acquire a 100% interest in the Webbs Silver Project and Conrad Silver Project in the New England Fold belt in NSW.

These acquisitions which will provide Thomson with a combined silver portfolio of about 33 million ounces should be finalised in early 2021.

Both projects have been the source of historic silver production and have a JORC 2004 combined resource of 34 million ounces of silver equivalent.

There is also extensive exploration upside to the current resource as indicated below.

Like Webbs, Conrad holds historical significance as it was one of the largest silver producers in the New England region, with about 3.5 million ounces of silver production recorded from around 175,000 tonnes of ore, together with by-product lead, zinc, copper and tin.

A previous owner in Malachite Resources NL released an ASX announcement in February 2011 when the silver price was $30.70 per ounce, broadly in line with where it sits today, valuing the gross contained metal value of the resource at $1 billion.

Interestingly, the Australian dollar was at parity with the US dollar at that stage.

Consequently, if Malachite was crunching the numbers today it would be applying a silver price of about $40.70 per ounce, suggesting the price could be more like $1.3 billion.

These variances highlight the need to understand where the commodity prices are at today, the impact of foreign currency movements and the supply/demand factors that are likely to come into play in 2021 and beyond.

That being the case we will return to Thomson, providing a more detailed rundown on its assets once we have a better understanding of its commodities.

We will also be providing our take on the group’s applications for landholdings in Queensland that are relatively close to the Cannington mine in Queensland, one of the world’s largest silver producers once we have a better understanding of its commodities. 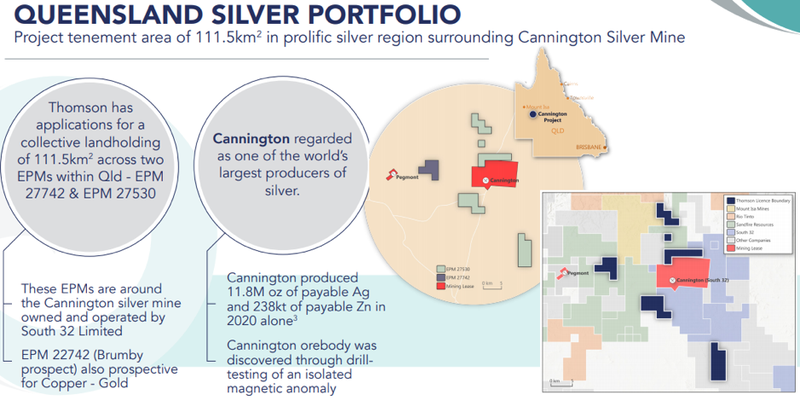 The prices of precious metals (gold and silver) have retraced from the heady highs that were struck mid-year when gold surpassed the US$2000 per ounce mark and silver pushed up towards the psychological US$30 per ounce level, representing a gain of 150% in five months.

Given the quantum of the gains that have been made in 2020, the retracements have been relatively moderate and prices still remain well above long-term averages.

Also, bear in mind that while the Australian dollar at US$0.75 has strengthened against the US dollar mainly since the onset of COVID, it remains attractive for Australian mining companies.

For example, the Australian dollar gold price is currently in the vicinity of $2450 per ounce, while the silver price is around $32 per ounce.

This not only demonstrates that the shifts in commodity prices and currencies still make the likes of gold and silver attractive, but it also highlights the strong margins that are available for producers.

For example, the average all in sustaining costs (AISC) for Australian gold miners are around the $1400 per ounce mark, implying a current margin of approximately $1000 per ounce.

Indeed, there are plenty of companies that are producing well below $1400 per ounce, particularly those that benefit from by-product credits such as gold-copper miners.

It is usually the case in the mining sector that there are benefits in identifying the next big thing rather than jumping on board a stock that already has plenty of upside factored into the share price.

This usually means targeting companies that are in the process of exploration or early stage development with scope for resource expansion.

In Thomson Resources, we have identified a company that perfectly fits this profile while also providing strong exposure to precious metals, particularly silver. 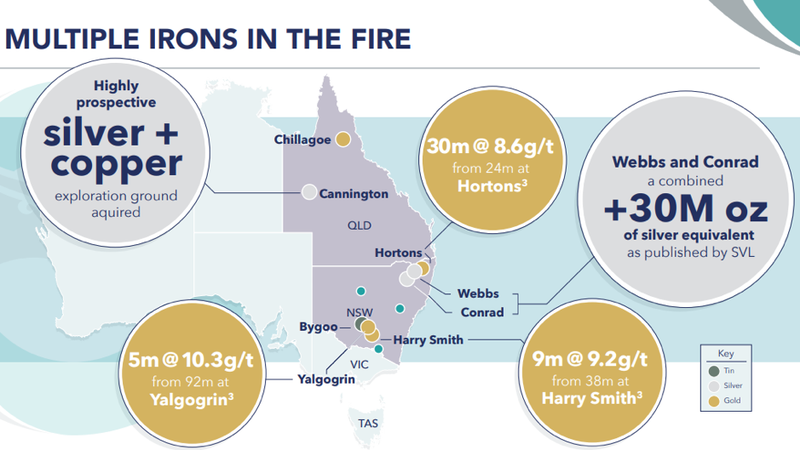 There are a number of benefits in targeting silver stocks, not the least being the fact that there are far less opportunities in that space given gold’s dominance in the mining sector.

However, silver also has something going for it in terms of the factors that drive the commodity price.

While history will show that it broadly tracks the gold price and is a target for investors during periods of volatility in other asset classes such as equities, silver is benefiting increasingly from its industrial applications.

As well as having applications in making jewellery, it is important to note that silver is used extensively in soldering alloys, electrical contacts and batteries.

Importantly, silver is being increasingly used in high-tech areas such as LED chips, nuclear reactors, touchscreens and solar energy, while its age-old use in the dental industry continues to provide demand for the metal.

According to Kitco analyst Peter Hug, “Once industrial demand picks up, more tailwinds for silver will push the metal closer to the $35 to $40 an ounce range next year.”

If the silver price surges in 2021, this will provide all the more interest in this stock.

There is an experienced management team driving TMZ forward, strengthened by the engagement of Global Ore Discovery, led by Stephen Nano to assist with running the due diligence process on the silver assets. Global Ore Discovery has a history of silver project generations that lead to takeovers.

The company is aiming to start aggressively expanding its silver resource base over the coming months, both organically and via acquisitions.

Aside from silver, the company has a number of quality intrusion related gold systems in NSW and Queensland that it is undertaking, as well as extensive rolling drilling programs that build on previous high grade results.

This gold drilling programme provides a significant number of near term catalysts.

The company has a market capitalisation of $32 million, and it recently raised $6 million, so appears well funded for near term exploration and acquisitions.

Webb’s, Conrad and the Cannington factor

We highlighted Webb’s profile as the highest grade undeveloped silver project in Australia, but it is worth noting that the project has historical production of 55,000 tonnes at an average grade of 23 ounces per tonne silver between 1884 and 1901.

Importantly, the vendor Silver Mines Ltd (ASX: SVL) undertook approximately 30,000 metres of exploration drilling that indicates the potential to increase the resource given down plunge extensions to drill tested areas.

Further, a large remainder of the tenement is largely underexplored.

The obvious question is ‘’if the project is worth pursuing why is Silver Mines offloading it.’’

It is very simple – the +$200 million Silver Mines is focused on developing the Bowdens Silver Project which has a mineral resource of 275 million ounces silver equivalent.

However, as a measure of Silver Mines’ assessment of the value that lies in these assets, the company will become a major cornerstone shareholder of Thomson Resources with a stake of 18.5%.

In terms of expanding its asset portfolio, one of Thomson’s most exciting developments is the group’s potential entry into the prolific silver producing Cannington region of Queensland.

The application for six sub-blocks just 10 kilometres west of the Cannington Silver Mine along with the Brumby Prospect should leave the company with a tenement area of 111.5 square kilometres.

One of the five tenement areas is only 1.5 kilometres from the Cannington Silver Mine, and from a broader perspective the area is on trend with Cannington and is characterised by the same rock types.

Other companies with regional projects are BHP/S32, Rio Tinto and Sandfire Resources.

Thompson also has gold and tin projects at various stages as outlined below, but at the moment it could be argued that the group’s tilt at silver is what has investors most excited as evidenced by the aforementioned share price momentum.