As the threat presented by the coronavirus became more evident in mid-February, investors rushed to gold, a very predictable reaction given the precious metal’s traditional safe haven status.

While a recent retracement has seen the price fall to somewhere in the vicinity of US$1640 per ounce, this still represents a substantial gain of about 5% in a fortnight.

The silver price has moved in similar fashion but it could be argued that it has received less recognition.

On 12 February, the silver price opened at US$17.60 per ounce and went on to trade as high as US$18.94 per ounce before losing some of those gains over the last two days.

Of course, gold tends to steal the headlines in times like these given that there are far more gold than silver explorers and producers.

To illustrate the impact of the gold rush on companies exposed to the metal, the S&P/ASX All Ordinaries gold index (ASX:XGD) increased from 7185 points on that day to peak at 7750 points on February 24.

In keeping with the pullback in the gold price, the XGD retreated to about 7420 points on Tuesday, and there was a particularly strong sell-off on Wednesday with the index down about 2.5% or nearly 200 points, and it finished the day at 7235 points. 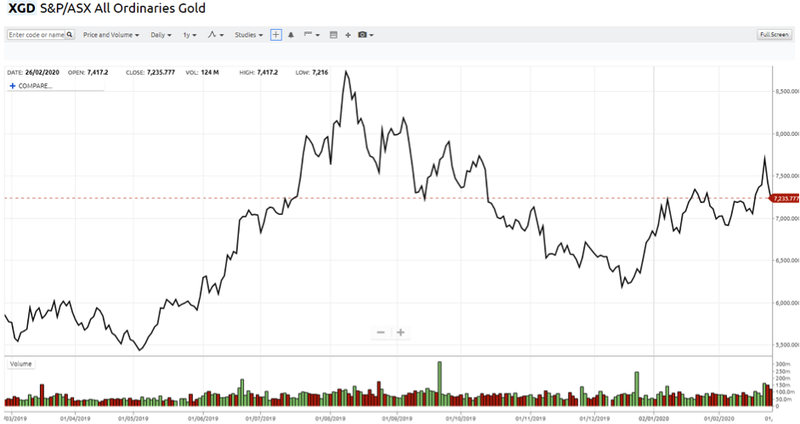 Interestingly, the XGD is only about 50 points shy of where it was a fortnight ago.

Of even more significance though is the fact that the XGD is well off the 12 month high of 8730 points struck on August 8 last year.

This is difficult to fathom as last year’s rally was mainly on the back of an uptick in the commodity price which at that stage was US$1500 per ounce.

With the gold price sitting 10% above that level and the coronavirus threat impacting global markets it is difficult to justify why the XGD is trading at a 1500 point discount to where it was in August 2019.

However, the fact remains that many gold stocks have experienced strong share price gains.

On the contrary though, despite silver’s strong performance on an across-the-board basis, companies exposed to the commodity haven’t received the same support.

As is usually the case, smaller companies are usually the last to benefit from a positive change in sentiment and the first to be impacted by bad news.

White Rock Minerals Ltd (ASX:WRM) is a good example of this trend, but there are other aspects that make the group appear extremely undervalued.

The company’s shares failed to respond to the recent surge in gold and silver prices, and this can arguably be attributed to the fact that the group’s Red Mountain Project which is considered by the broader market as a base metals asset even though gold and silver mineralisation has been identified is the key share price driver.

But Mount Carrington should have a significant impact on the group’s valuation because of its established resource, existing infrastructure and the high probability of expanding what is already a project that has proven to offer strong financial returns based on an Australian dollar gold price of $1700.

The Mount Carrington Project is a 100 per cent owned advanced gold-silver epithermal project located in northern NSW, five kilometres from the township of Drake.

This asset which comprises 22 mining leases could generate substantial cash flow within two to three years. 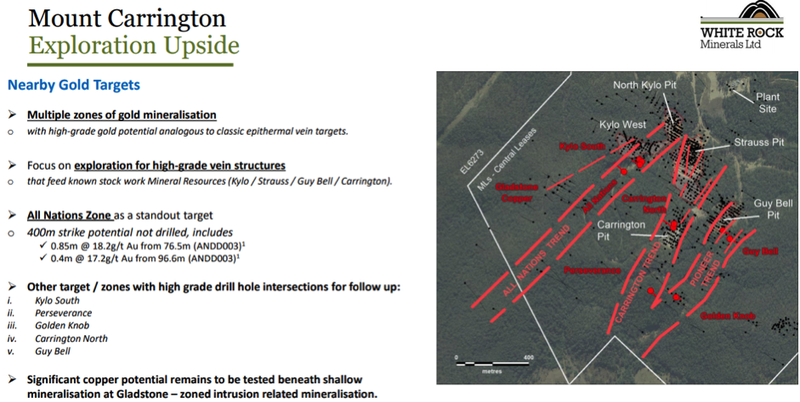 Results of the PFS on an existing Mining Lease, and A$20 million of infrastructure from previous owners, confirmed a financially robust operation.

The Stage One mine includes two gold resources, the Strauss and Kylo deposits, including 188,000 ounces gold (4 million tonnes at 1.4g/t gold).

The following metrics relate to a prefeasibility study that was completed in December 2017.

Gold up, dollar down improves metrics

As illustrated above, the return on investment and free cash generation increase exponentially for every $100 increase in the gold price.

For example, free cash flow increases approximately three-fold from $36.7 million to $110.3 million when comparing an Australian dollar gold price of $1700 to $2200.

When management crunched the numbers in November the Australian dollar gold price was hovering in the vicinity of $2100 per ounce.

At that stage the Australian dollar was fetching approximately US$0.68, but it has since slumped to around US$0.655.

Meanwhile, the gold price has increased by about US$200 per ounce since November, and it is now hovering in the vicinity of US$1640 per ounce.

This implies an Australian dollar gold price of $2540 per ounce, representing a leap of 20% since November.

It is worth noting that the mine life could be increased by another 2 to 3 years if some of the JORC silver resources were included.

This has become increasingly viable with the Australian dollar silver price up from about $24.80 per ounce in November to $27.33 per ounce.

Drilling out the two remaining JORC inferred gold resources and the six nearby identified gold prospects also has the potential to considerably grow the resource, adding mine life and improved returns on capital invested.