Investors not shaken by Stellar move

Shares in Stellar Resources (ASX:SRZ) went sideways yesterday despite the tin player announcing the net present value of its flagship Heemskirk Tin Project climbed by 62% to $99 million, with pre-production costs going down by 12.9%.

It told the market about the in the morning session, optimising a pre-feasibility study done in 2013 to come up with the fresh numbers.

The main improvements in the NPV came as a result of a simplification of the metallurgical process and a reduction in capital expenditure, as well as an increase in tin recovery from 4.5% to 72.8%. 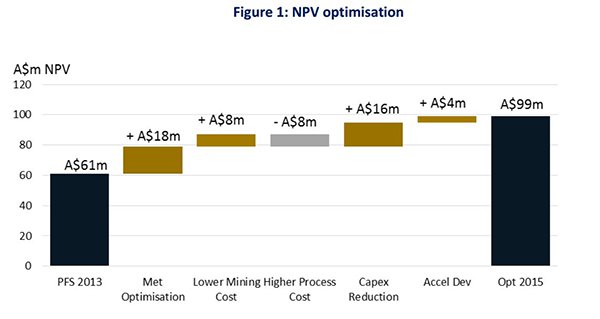 Crucially, the new and improved PFS used the same price assumptions as the older version, which assumed a tin price of $US25,000 ($A35,722) per tonne.

Capex was reduced by 12.9%, with the bigger chunk of savings coming from a reduction in processing costs.

The new numbers are seen as a vital step as SRZ attempts to talk to the money men about starting a definitive feasibility study on the project, and converting a mineral resource to an ore reserve with the drilling of 24,250m targeting key deposits.

Just over 92 million SRZ shares changed hands, well above the 30 day trading average of 36 million, but its price remained at 2.6c.


The project is located in the historic mining town of Zeehan in north west Tasmania and has been floated as the highest grade undeveloped tin project in Australia.


The plan is to mine the tin from an underground mine and process it at a nearby standalone processing plant.

SRZ’s ultimate goal is to become the second largest tin producer in Australia.