This comes just a fortnight after the group released promising assay results from the same project, a development that triggered a 25% increase in its share price.

The latest round of assay results could also have a positive share price impact given they also feature impressive widths and robust grades of mineralisation close to surface.

At Anomaly A1 (The Edge), drilling was planned to confirm historic results and provide a better understanding of the geometry and nature of the mineralisation with more appropriately oriented drilling into an apparent steep westerly-dipping structure.

Drilling successfully confirmed mineralisation with a best result of 18 metres at 1.9 g/t gold from 45 metres in the single hole drilled. 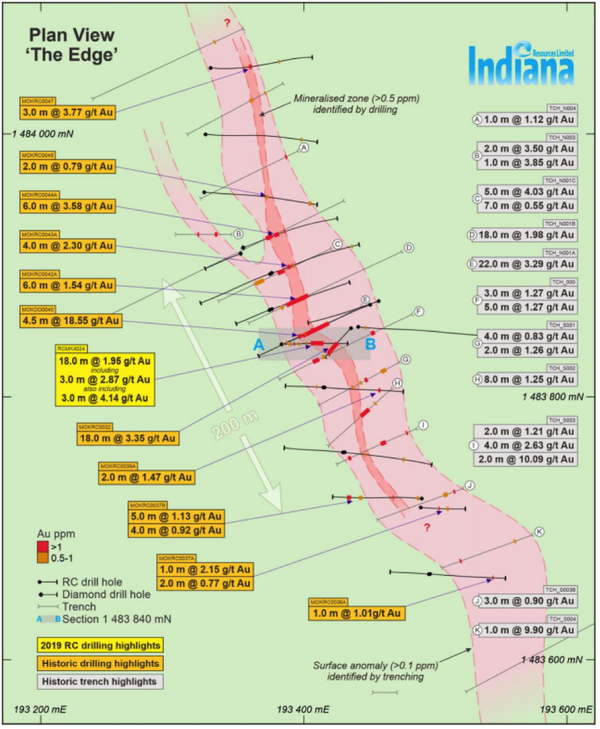 As well as producing some highly encouraging drilling results and confirming the significance of ‘The Edge’ Prospect, the exploration program has provided additional targets for further work, including a number at Anomaly A2 South.

Anomalies A2 and A3 represent poorly tested structures parallel to The Edge which together are part of a coherent 4,000-metre-long geochemical anomaly.

At Anomaly A2 South, the target was a historic trench with various anomalous gold values, including three separate intersections of one metre grading 5.5 g/t gold, 3.9 g/t gold and 3.5 g/t gold.

“We look forward to reviewing the results from the soil geochemistry programme, and the recommencement of drilling after the wet season ends in October.

‘’Initial focus will be defining the limits of mineralisation at ‘The Edge’ along several hundred metres of strike to a depth of at least 300 metres below surface.”

Indiana appears to be in the zone

It is important to note that all historic drilling apart from ‘The Edge’ prospect has been completed on restricted broad spaced traverses ranging between 1000 metres and 2000 metres.

The traverses were designed as initial tests for the presence of mineralisation beneath selected soil anomalies or along mineralised structural trends interpreted from regional mapping.

Given the limited nature of drilling to date, the success rate in identifying gold mineralisation has been high, which demands detailed evaluation and follow up.

All persistent anomalies identified to date appear related to north-south and northwest-southeast trending structures within the Main Transcurrent Zone (MTZ).

The MTZ is interpreted to be one of the major structures which controls mineralisation in Western Mali and Eastern Senegal, considered an excellent geological and structural location within the highly prospective Kenieba Inlier of Western Mali, known to host a number of multi-million ounce gold deposits, including Barrick Gold’s Loulou 12.5 million ounce deposit and Teranga Gold’s Sabodala 8 million ounce deposit.

Anomalies A1 to A10 as shown below were identified during a recently completed review of historic soil geochemistry data. 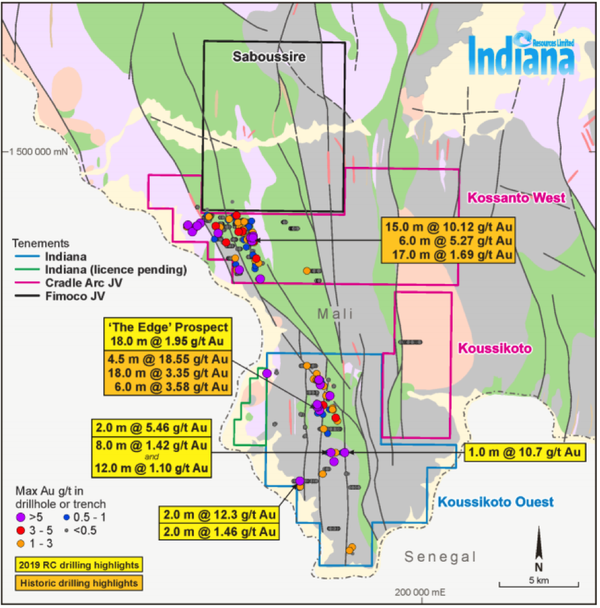 These anomalies ranged up to 5,000 metres in length, with only A1 having previously been drill-tested.

The anomalies are situated within a north-south trending corridor that is 12 kilometres long and five kilometres wide located on the northern extension of the MTZ where it crosses from Senegal into Mali.

The recently completed RC program was designed to test for significant intercepts recorded in 2018 aircore drilling at A5, A7, A8 and A9, as well as soil anomalies identified during a recent review of historic soil geochemistry data.

These, along with the aforementioned ‘The Edge’ prospect will be the subject of further exploration that will follow up historic drilling.

Indiana is also collating recently completed soil sample results for Koussikoto Ouest, which lies to the south as indicated above.